Obama Also Got It Wrong in the Middle East 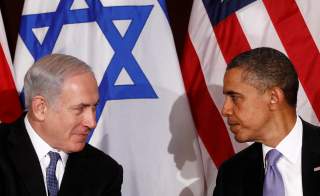 Dozens of recently published memoirs written by officials who worked for the Obama administration have helped us understand these officials’ backgrounds and views of actions taken and not taken. But like others in the memoir genre, the latest crop is generally self-justifying. Despite these glowing tomes, the Obama administration was far from the golden age for U.S. alliance, especially for U.S. allies in the Middle East.

I had a ringside seat for U.S.-Israel relations during President Barack Obama’s first term as the political counselor at the U.S. Embassy to Israel. In the spirit of seeking to better understand these relations in those years, I offer one episode glossed over in the memoirs to date. That episode began with Obama’s speech entitled “Remarks by the President on the Middle East and North Africa” and delivered at the State Department on May 19, 2011.

This was Obama’s first major speech on the Middle East since the Arab Spring had broken out six months earlier. One of America’s most important Arab allies, former Egyptian president Hosni Mubarak, had resigned in the face of angry crowds in Tahrir Square; dictators in Tunisia and Yemen had been toppled; America had intervened to prevent Muammar el-Qaddafi in Libya from marching on Benghazi; Assad in Syria had started massacring his citizens; finally, Arab monarchs in the Gulf, Jordan and Morocco were shaken and one of them, in Bahrain, was facing mass protests

American diplomats in the region anticipated that the speech would lay out a new ground plan for addressing the unprecedented street protests then convulsing the entire Arab Middle East.

And Obama did exactly that in the first three quarters of the May 19, 2011, speech. But then he pivoted. “At a time when the people of the Middle East and North Africa are casting off the burdens of the past, the drive for a lasting [Israeli-Palestinian] peace that ends the conflict and resolves all claims is more urgent than ever,” he said. Warning that Israel must act boldly, Obama stated that the borders of Israel and Palestine should be based on the 1949 Armistice lines with mutually agreed swaps.

This portion of the May 19 speech flabbergasted me. The attempt to link ongoing Arab street protests with resolving the Israeli-Palestinian conflict seemed mistaken. The protestors were not making this claim. Israeli-Palestinian talks were on hold for unrelated reasons. More importantly, the speech revoked a key written commitment that the United States made to Israel at the time of Israel’s unilateral withdrawal from Gaza in 2004. That couldn’t help restart Israeli-Palestinian talks, which we were trying to do.

The Obama speech revoked a commitment made in an exchange of letters on April 14, 2004, between President George W. Bush and Prime Minister Ariel Sharon. At the time, Israel’s parliament, the Knesset, was debating Sharon’s plan to unilaterally withdraw from Gaza and four West Bank settlements. Sharon went to Washington to obtain U.S. commitments that would help him secure Knesset approval of the plan. He got an important promise that helped him win Knesset approval. The United States, in the Bush letter to Sharon, said it would support Israeli-Palestinian talks over borders that would start with Israel keeping settlement blocs inside the West Bank, provided there would be mutually agreed swaps in exchange for Israel keeping those blocs.

In his May 19, 2011, speech, Obama revoked the U.S. commitment and said the United States would support talks that start from the 1949 lines and proceed on the basis of swaps. Thus, if the Palestinians reject any swaps (which they have consistently done), there would not be any realistic progress on borders. From Israel’s perspective, the 1949 Armistice lines leave them in an indefensible position, with most of its population on a coastal plain with eleven miles between the West Bank and the Mediterranean at its most narrow.

Following Israeli protests of the Obama revocation, the President publicly reversed himself three days later in a speech to AIPAC, insisting that there had been no change in the U.S. position on border negotiations. But a senior official involved in drafting the speech had told me earlier that the May 19 speech was intended to convey a change in policy on borders, as a get-tough signal to Israel.

There were two other problems with the Obama speech. First, its timing appeared to humiliate Israeli prime minister Netanyahu who only learned of the speech’s Israeli-Palestinian points as he was stepping onto a plane to Washington for a previously scheduled meeting. At the May 20 press conference at the White House, Netanyahu brought up the apparent change in U.S. policy and appeared to lecture the President, causing public speculation about the U.S.-Israel relationship. Second, revoking the 2004 U.S. commitment on borders may also have contravened an earlier U.S. commitment to Israel, made in a memorandum of understanding attached to the 1975 Sinai Disengagement Agreement. In this MOU the United States promised Israel not to present any initiatives on Middle East peace without first discussing them with Israel.

The U.S.-Israel relationship has always been dynamic with many ups and downs in each administration. The Obama administration, fortunately, had a senior advisor with deep Israel experience, Dennis Ross, who worked to smooth over relations with an Israel that was navigating an especially turbulent time in the Middle East.

The Obama revocation doesn’t figure in any of the largely self-congratulatory memoirs of the Obama years; it wasn’t a high point for any of the key figures. I recall it as a moment of clarity regarding the Obama team's disdain for Israel. It is also an example of the increasing partisan handling of our foreign policy, in which each president often seeks to undo policies and sometimes even commitments made by the immediate predecessor. Neither started with President Donald Trump. Finally, it is a reminder of the need for experienced advisors and diplomats who can help manage our foreign relations alongside our elected political leaders who set the policies.

Bob Silverman is a former senior Foreign Service Officer and President of the American Foreign Service Association. He has published opinion pieces in Foreign Policy, USA Today, the Foreign Service Journal and The Forward, and translated a book from Arabic, A Drive to Israel by Ali Salem.