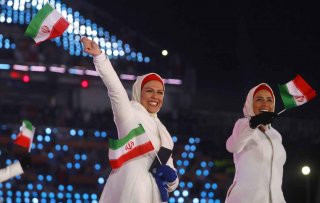 While Iran’s harassment of athletes knows no limits, its punishment must, the Court of Arbitration for Sport ruled on Monday. The CAS determined that the International Judo Federation had no “legal basis” for serving Iran an unlimited suspension over its boycott of Israeli athletes. However, the court recognized that the judo federation had committed “serious violations” and referred the case back to the IJF for disciplinary measures.

The Islamic Republic has a long history of dodging matches against the Jewish State. Former coach for Iran’s national Greco-Roman wrestling team, Sardar Pashaei, stated that “I personally witnessed Iranian authorities forcing athletes to refuse to compete with Israeli athletes.” In 2017, an Iranian trainer coerced his wrestler, Alireza Karimi-Machiani, to throw a match to prevent a showdown with an Israeli, which sparked international outrage.

Iran’s judo boycott of Israel came to a head in February 2019. Judoka Saeid Mollaei threw a match to avoid facing his Israeli counterpart, Sagi Muki. In May of that year, IJF President Marius Vizer extracted a letter from the presidents of Iran’s National Olympic Committee and judo federation guaranteeing they would “fully respect the Olympic Charter and its non-discrimination principle.” Nevertheless, in August, Tehran again ordered Mollaei to lose intentionally to avoid facing Muki.

This was the final straw for the IJF. Iran’s blatant disregard for the principles of the Olympic movement, namely non-discrimination and fair play, had gone on long enough without consequence. Between September and October 2019, the IJF reviewed the case and suspended Iran from all competitions and activities “until the Iran Judo Federation . . . accept that their athletes fight against Israeli athletes.” Iran appealed the decision immediately.

Though the Islamic Republic was suspended for sixteen months, most events were canceled due to the global pandemic. Monday’s CAS ruling undercut the IJF decision, limiting the judo governing body’s ability to punish Iran for discriminating against Israelis and harassing its own athletes.

Meanwhile, Mollaei has received no such reprieve. He fears for his life and for the lives of his family members. In 2019, when it appeared that Mollaei might have to face an Israeli, Iranian officials called Mollaei and his coach, Mohammad Mansouri, demanding the judoka drop out. Iranian security forces went to the house where Mollaei’s parents lived and an Iranian embassy official even trespassed into the athlete warm-up area to intimidate the judoka. With Vizer’s help, Mollaei applied for asylum in Germany and eventually was allowed to compete on behalf of Mongolia.

Just last month, Mollaei won silver at the two-day IJF Grand Slam in Tel Aviv. Vizer declared it a “unique tournament at an exceptional time” and praised Mollaei and Mansouri, who also had to flee Iran, terming the men as “the bravest people I have ever met.” While he can compete in judo again, Mollaei cannot return home. If he did, then he might meet the fate of other athletes who dared to defy the clerical regime.

Elite athletes face intense pressure, including the death penalty, for any semblance of protest against the theocracy. One example is murdered wrestler Navid Afkari, who became a wanted man for participating in protests in 2018 against the regime. Iran tortured Afkari into falsely confessing to the murder of a security guard, according to human rights groups. In September 2020, the regime hanged him.

The regime executed a second wrestler, Mehdi Ali Hosseini, in January 2021, despite an urgent appeal from Hamid Sourian, the Iranian Wrestling Federation’s vice president. Due to the mysterious circumstances surrounding Hosseini’s trial, it is unclear if Iran executed him for dissent, or if this is just another case of the clerical regime denying its athletes their right to life and a fair trial.

In the same month as Hosseini’s execution, Iran’s clerical regime executed a champion boxer and prominent sports coach, Ali Mutairi. Regime authorities severely tortured Mutairi to extract a forced confession for killing two Basij militia members in 2018. The UN condemned the execution of Mutairi, who was sentenced to death on the frequently invoked nebulous charges of “enmity against God” and “corruption on earth.” Mutairi was an Ahwazi Arab—a minority subject to intense discrimination in Iran.

The International Olympic Committee’s and other sporting bodies’ failure to keep sustained pressure and penalties against the clerical regime allows the Islamic Republic to continue discriminating against Israelis and repress and even execute its own athletes. The committee should heed calls from Iranian dissidents and Iranian athletes to boycott the clerical regime at all international sports competitions, including the Japan 2021 games. Iranian athletes should be allowed to compete, but under a neutral flag, like Russian athletes did in 2018 amid a massive doping scandal.

The CAS ruling sends the wrong message to Tehran. The principles of the Olympic Charter and the lives of Iranian athletes ought to compel more than this.

Iran and the Wrath of Esther