Only 1 Case? Turkey's Coronavirus Coverup Is A Disaster Waiting To Happen 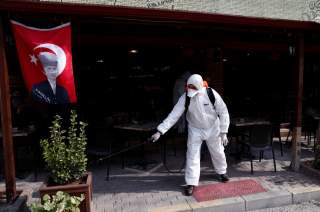 While the coronavirus COVID-19 is affecting 119 countries globally, Turkey has remained the only unaffected country among other countries with a population above 50 million for this long. The Minister of Health, Fahrettin Koca, was bragging about Turkey’s outstanding measures to control the deadly coronavirus outbreak until last night. At around 1:00 am local time on Wednesday, Koca confirmed that the country’s first coronavirus patient had been identified. He didn’t share the patient’s details, especially his location, and he resisted responding to media questions by claiming that this would violate the patient's privacy. Turkey took some serious early precautions including thermal screening at airports, closing its border with Iran, and suspending air travel to China, Iran, Italy and South Korea.

It was only a matter of time before Turkey had a positive coronavirus case. Turkey shares a border with Iran, which has had more than 8,000 coronavirus patients and around 300 deaths. Turkey is also one of the hottest tourism destinations of the world; Istanbul Airport is one of the busiest airports in the region. The lack of coronavirus spread and the identified cases engendered some suspicion among Turkish people.

Thus far, Turkey has been using its own virus detection (real-time PCR) kits. Those kits are produced and manufactured in Turkey by an authorized private company funded by governmental institutional grants. National Virology Lab has also contributed to the development of a fast-reacting kit where the results can be read in as short as ninety minutes. Existing conventional PCR testing might take about twenty-four hours. Turkey claims its test is the fastest and the most accurate test in the world. The Minister of Health also mentioned several times that the test has been exported to several countries including the United States. To my knowledge, there’s not a single institution or lab present in the United States using Turkish coronavirus detection kits. Also, until today, those tests were all performed at a central testing facility; every hospital sent samples to the nation's capital. To date, Turkey has done about 2,500 tests. The lack of any identified cases provoked suspicion because if the test is negative, there was no other way to prove that the test might be positive.

Turkey has an ongoing economic crisis and relies on tourism revenue. If tourists are going to stop visiting Turkey, this year the economy might collapse. This could also be one of the reasons for not reporting a positive case for such a long period.

Turkey’s media ownership structure is preventing citizens from receiving reliable information on the coronavirus. As the world’s biggest jailer of professional journalists, the Turkish government is continuing its efforts to censor social media. According to Twitter’s 2019 transparency report, Turkey was responsible for the highest number of requests made for content removal and takedowns between second half of 2019 came from Turkey. In light of that information, the government promised to take legal action against social media users or journalists who criticized its coronavirus detection approach.

The International Monetary Fund (IMF) has announced $50 billion of support for countries hit by the coronavirus. This coincidental timing was not lost on some social media users, who joked that the timing of the first coronavirus confirmation in Turkey came as the IMF said it is making money available to only help the affected countries.

The Turkish Medical Association (TMA) is an independent medical and health professional association that aims to protect and promote public health in Turkey, contribute to medical education, and protect the morals of the medical profession and the rights of physicians. The relations between the government and the TMA have always been tense. Recently, a court sentenced eleven TMA council members to prison, in connection with two anti-war public statements that they had issued after the launch of military operations in Syria last year. Despite their efforts to collaborate during the coronavirus outbreak, TMA reports that there has not been any government response yet.

Core levels of public trust in government are necessary for the fair and effective functioning of government institutions. While trust takes time to be established, it can be lost quickly. This is especially true in crisis situations, where trust in the government is critical to advising the public and disseminating important information. Turkish citizens will have to contend with these problems as they navigate the coronavirus crisis.