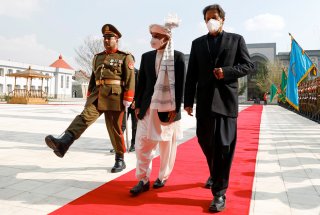 Col. Nick Pratt, USMC (ret.), the late founder of the George C. Marshall Center’s Program on Terrorism and Security Studies, told a story about, while a young boy in Peshawar, his mother came to pick him up from a neighbor’s home. She worried when a neighbor told her he could not come immediately to her because he was learning to pray. When he finally came running to her, he proudly showed her how he had learned the Lord’s Prayer, taught to him by his Muslim babysitter in Pakistan because she felt a Catholic boy his age should know how to recite it.

Such an anecdote was not strange in 1950s-era Pakistan. It came just a few years after Muhammad Ali Jinnah, Pakistan’s founder and first president, urged Pakistanis to respect religious pluralism. Despite the bitterness and bloodshed accompanying India’s partition and the beginning of the Kashmir conflict, Pakistan’s founders embraced and encouraged religious tolerance. Consider this 1953 list of Pakistan public holidays: It included not only the Christian holidays of Christmas and Easter; but also Diwali, the Hindu, Jain, and Sikh festival of lights; Holi, the Hindu festival of colors; and also Dussehra, a Hindu festival which celebrates the triumph of good over evil.

The Pakistan of yesteryear and the Islamic republic Pakistan’s founders envisioned bear little resemblance to Pakistan now. Pakistan today has become a state whose judges free a man complicit in the murder of an American journalist after forcing him to “confess” his Judaism on camera. It is a country in which members of religious minorities regularly face death for often spurious accusations of blasphemy. Pakistan’s Hindu population has dwindled and is now headed for extinction. Not only Christians but also Shi’ites who account for 10 percent of the country’s population face discrimination and are targeted with cynical and malicious application of blasphemy charges, but few suffer as much as Pakistan’s Ahmadis whom government officials single out for persecution. This past summer, after Islamist Khalid Khan murdered Tahir Ahmed Naseem, a Pakistani-American and member of the Ahmadi sect, the teenage gunman posed with arresting officers who appeared supportive of Khan’s act.

Pakistan’s transformation into a symbol of religious intolerance extends into international affairs. Pakistan, alongside Turkey, Azerbaijan Saudi Arabia, and Yemen, has no diplomatic relations with Armenia. Most countries cite the Nagorno-Karabakh dispute as a reason for their lack of ties. Azerbaijan, Turkey, and Pakistan do as well but go further: Azerbaijani President Ilham Aliyev has repeatedly laid claims to all of Armenia, including Yerevan. Turkish President Recep Tayyip Erdoğan brags about the creation of an “Islamic Army of the Caucasus.” Pakistan, meanwhile, is the only country to refuse even to recognize Armenia as a country. Pakistan also reportedly sent fighters to fight Armenians during the recent Nagorno-Karabakh war. While Pakistan enjoys Azerbaijan’s diplomatic support on Kashmir, the greater problem seems simply to be the fact that Armenia is a Christian country in dispute with a Muslim one.

A new “Axis of Evil” appears to be forming. Prime Minister Imran Khan has drawn Pakistan closer to Turkey both militarily and diplomatically. Both countries lash out at Christians, Shi’ites, and religious minorities. Both appear willing to cheer genocide against Armenians not only in Nagorno-Karabakh but also in Armenia proper. Khan and Erdoğan also preside over rollbacks of both democratic and press freedoms. Turkey flirts with Islamic State remnants in Syria, while Pakistani leaders support both the Taliban and other designated terror groups.

The tragedy is political leadership. Pakistan is now on the trajectory to become either a rogue regime or a failed state. Its future is not inescapable, however. If Pakistan is to succeed, then it need only look for inspiration in its past, a time when Pakistani authorities both respected religious freedom both at home and abroad and understood that leadership and respect came not from sponsoring terrorism or apologizing for genocide, but rather recognizing every country—even predominantly Christian ones—have a right to exist.