Is Pakistan Nothing More than a Colony of China? 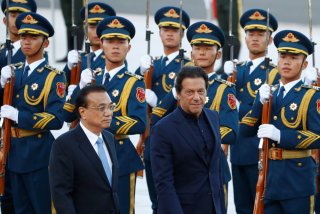 Pakistanis may soon die en masse for China’s interests, and the Pakistani government may allow it to happen. At issue is the nature of how Pakistan’s leaders have shifted their alliance partners from the United States to China.

That the U.S.-Pakistan relationship has plummeted in recent years should not surprise. Pakistan was long an American Cold War ally but it was a partnership of last resort for both countries. President Harry S. Truman had initially sought an alliance with India. India was not only a democracy, but it also was home to the world’s second-largest population, and its ability to dominate the Indian Ocean made it a strategic prize. Indian prime minister Jawaharlal Nehru, rebuffed him, preferring instead to seek non-alignment. Pakistan had little choice but to work with the United States: To join the Non-Aligned Movement was to subordinate itself to India. Because the Non-Aligned Movement leaned toward the Soviet sphere of influence, Pakistan could also not trust Moscow to protect its interests vis-à-vis India, as Moscow would always side with Delhi for reasons of realpolitik.

Initially, both the United States and Pakistan were willing to put their grievances aside. Pakistan became a charter member of the Central Treaty Organization (CENTO) or “Baghdad Pact,” an Eisenhower-era grouping meant to serve as a corollary to NATO along the Soviet Union’s southern tier. The notion of mutual defense, however, took a hit when war erupted between India and Pakistan, first in 1965 and then again in 1971. Pakistan insisted India was the aggressor and demanded the United States come to its assistance. U.S. authorities, however, quietly blamed Pakistan for starting the conflict and refusing to come to Pakistan’s assistance. Pakistan lost both wars and nurtured a deep-seated grudge against the United States for Washington’s alleged betrayal.

From Pakistan’s perspective, the United States has also acted as a fair-weather friend. Beginning in the 1970s, Congress has imposed a series of arms embargoes and sanctions on Pakistan for its nuclear activities. Whenever Washington needed Islamabad’s assistance, however, the U.S. government waived sanctions only to reimpose them once it no longer needed Pakistan’s help.

The United States, of course, also had its grievances. Congress imposed sanctions for legitimate reasons. Pakistan’s support for terrorist groups remains inexcusable, and all countries should be outraged at Pakistan’s removal from their lists of almost four thousand terrorists in recent years, including Zakiur-Rehman Lakhvi, one of the masterminds of the 2008 Mumbai attacks, and Ahmed Omar Sheikh, Wall Street Journal reporter Daniel Pearl’s murderer. Pakistan has never fully accounted for the activities of nuclear scientist A.Q. Khan. Pakistan played a double-game with the Taliban and sheltered Al Qaeda leader Usama Bin Laden. The FBI has repeatedly disrupted Pakistani attempts to illegally acquire restricted goods and technologies to Pakistan. In January 2020, for example, the United States formally charged five Pakistani businessmen of running a network of front companies to illegally acquire U.S. technology to advance Pakistan’s nuclear program.

With such a long history of bad blood between the United States and Pakistan, the Pakistani turn toward China surprises no one. Pakistani leaders see in China strategic depth, an ally able to deter Indian retaliation across the line-of-control, and a partner unlikely to criticize Pakistani corruption, its poor treatment of religious minorities, and its internal human rights record. For China, Pakistan can be a major market, provide land links into West Asia, and a strategic port at Gwadar.

Pakistanis will soon realize—if they have not already—what a devil’s bargain their country has made. In China, Pakistan has tied itself to a country that is responsible for the incarceration in concentration camps of one million Muslims solely on the basis of their religion and it has partnered with a country that thinks nothing about killing Pakistanis and humiliating Pakistan.

Now, it is also increasingly clear that the China-Pakistan Economic Corridor [CPEC] may be becoming a major road for transmission into Pakistan and, more broadly, South Asia. While Pakistan has struggled with moderate succeed in stamping out hotspots where the coronavirus has erupted, communities living along the corridor in Gilgit-Baltistan, Azad Kashmir, Punjab, Sindh and Baluchistan are fearful that Chinese trade and traffic along the corridor as well as its expedition of internal Pakistani commerce across regions, could enable the epidemic to spread like a wildfire. It may be this pressure which is leading Prime Minister Imran Khan to lift Pakistan’s lockdown prematurely.

The full danger of spread along the CPEC may not yet be apparent. Weather blocks Corridor passes during winter, but as spring thaws the ice and snow, commerce usually explodes. Many Chinese workers had also returned home for the Chinese New Year, which coincided with necessary winter-related construction delay, but several hundred Chinese workers have now returned to Pakistan to work on the project, bringing the total numbers of Chinese workers on different CPEC projects to between ten thousand and fifteen thousand. There is no indication that China has set up any testing and quarantine sites for his CPEC workers in Pakistan.

Gilgit-Baltistan may be the canary in the coal mine as locals suffer for the sake of Pakistan’s China partnership. It is one of Pakistan’s harder-hit regions. It has only one testing center and can test only fifteen people daily. While there are reportedly nine ventilators in the region, local doctors estimate they need at least two hundred of them. Pakistani officials who have long neglected the region, even while working to strip away its right to self-rule.

Pakistani authorities in Islamabad may accept Chinese assurances in order not to hurt Pakistan’s bottom line and insult Beijing, never mind that it was Chinese lies and obfuscation that enabled the epidemic to spread so far in the first place.

It has been easy for Pakistani nationalists to use anti-Americanism and grievances real or imagined in order to shirk responsibility for their own actions and cynically drive a wedge between Islamabad and Washington. China has simultaneously courted Pakistan as Islamabad looked for new partners. Pakistanis may soon recognize, however, that China seeks not a partner, but a colonial vassal, the deaths of whose citizens it sees as wholly irrelevant.

A former Pentagon official, Dr. Michael Rubin has lived in post-revolution Iran, Yemen, and both pre- and postwar Iraq, and he spent time with the Taliban before 9/11. He is the author, co-author, and co-editor of several books exploring Iranian history, American diplomacy, Kurdish studies, and Shi’ite politics, including Kurdistan Rising (AEI Press, 2016), Dancing with the Devil: The Perils of Engaging Rogue Regimes (Encounter Books, 2014); and Eternal Iran: Continuity and Chaos (Palgrave, 2005).

Rubin has a Ph.D. and an M.A. in history from Yale University, where he also obtained a B.S. in biology.