Pakistan’s Deal with the Devil in Afghanistan 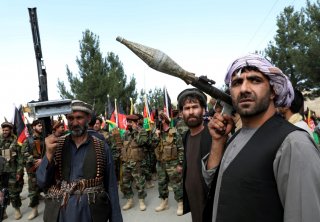 It is a well-known fact that the Taliban 1.0 was in substantial part a creation of Pakistan’s military intelligence and heavily dependent upon the Pakistan army for its take over of most of Afghanistan in the 1990s. That the original cadre of the Taliban was the product of Pakistani madrasas funded by Saudi money and inspired by Wahhabi ideology is also an acknowledged fact. In return, the Taliban was seen by Islamabad as an instrument of Pakistan’s foreign and defense policy even if the Pakistani military was not always able to control it fully.

In the perception of the Pakistani military brass and a large segment of the political class the Taliban when in power was perceived as providing Pakistan “defense in depth” in case of a future conflict with its nemesis India. More importantly, under the Taliban Afghanistan offered an ideal training ground for Pakistani and Pakistan-inspired terrorist groups that Islamabad infiltrated into Indian-administered Kashmir. This strategy was aimed at creating enough mayhem in the Kashmir valley to tie down substantial Indian security forces, which could have been deployed on the Line of Control in Jammu and Kashmir and on the India-Pakistan border, in anti-insurgency operations. They were also used to stoke the fire of anti-Indian insurgency in the Kashmir valley.

However, Pakistan’s sponsorship of the Taliban turned out to be a double-edged sword. The blowback in terms of the proliferation of hardline Sunni Islamist groups, many of which were also sponsored by the Inter-Services Intelligence (ISI), (the premier intelligence agency of Pakistan) posed a threat to the Pakistani regime and especially to the all-powerful military. Groups like the Tehrik-i-Taliban Pakistan (TTP) and the Haqqani network challenged the Pakistani military’s monopoly of the instruments of force in the country and carved out territories in the tribal belt that they controlled. This eventually led to major military crackdowns against these terrorist organizations in Swat and North and South Waziristan. The army succeeded in partially taming them but with great loss of life and massive human dislocation.

Instead of learning the right lessons from this experience, the Pakistani rulers based their policy on making a distinction between the good Taliban, who operated in Afghanistan but did not threaten their rule within Pakistan, and the bad Taliban who challenged the military’s monopoly of force within the country and acted as an alternative locus of power. Islamabad allowed the Afghan Taliban leadership to use Quetta as their headquarters during their years of exile. It also facilitated their negotiations with the United States in Doha that would permit an orderly American withdrawal from Afghanistan without any hindrance by the Taliban. What the Pakistani establishment overlooked was that the Afghan and Pakistani jihadi groups had a symbiotic relationship in ideological terms and shared the same objectives of imposing sharia law and undermining “non-Islamic” rule by force if necessary both in Afghanistan and Pakistan. In July Pakistan Army chief General Qamar Javed Bajwa and ISI chief Lt Gen Faiz Hamid acknowledged as much in a briefing for parliamentarians that the TTP and the Afghan Taliban were “two faces of the same coin.”

Despite this acknowledgment, Pakistan’s reaction to the Taliban’s recent capture of power in Afghanistan continues to betray the same old mindset that distinguishes between the good and the bad Taliban. Prime Minister Imran Khan welcomed the Taliban victory by proclaiming that it had “broken the shackles of slavery” in Afghanistan. He was not alone in expressing satisfaction at the fall of Kabul to the Taliban. Not only did the religious parties congratulate the Taliban for their victory, but some cabinet ministers expressed unrestrained glee and compared the fall of Kabul to the fall of Saigon in 1975.

But, the coming to power of the Taliban in Afghanistan is likely to be a pyrrhic victory for Islamabad for several reasons. The scramble to get out of Afghanistan in the wake of the Taliban victory indicates that Pakistan could soon be faced by a massive influx of refugees which its shattered economy can ill afford. More importantly, jihadist groups in Pakistan can be expected to take heart from their Afghan counterparts’ victory and renew and intensify their efforts to challenge the Pakistani establishment and confront the Pakistani military by force once again.

Furthermore, despite the help rendered by Pakistan to the Taliban during their time in the political wilderness they are unlikely to be as pliant as Islamabad expects them to be. There are major economic compulsions, the need for international aid, in particular, that could force Taliban 2.0 to live up to its commitment not to permit terrorists to use bases in the country. This could impact Pakistani plans to once again use Afghanistan as a training ground and safe haven for terrorist groups it hopes to use against Indian targets.

Additionally, Mullah Baradar, who is expected to take over as President of Afghanistan, was jailed in Pakistan from 2010 to 2018 for attempting to negotiate with President Hamid Karzai and the Americans without Pakistan’s permission. He was released in 2018 because of American pressure so that he could act as the Taliban’s lead negotiator in Doha to facilitate the withdrawal of American troops. One wonders if Baradar has forgotten the treatment he received at the hands of Pakistan and will be willing to do Islamabad’s bidding.

Finally, the Pakistani authorities seem to have underestimated the element of Pashtun nationalism in the Taliban’s ideology. The Taliban leadership and rank and file are predominantly Pashtun and the division of the Pashtun people by the British-imposed Durand Line in the nineteenth century still rankles among the Pashtuns. Even during Taliban rule from 1996 to 2001, when the government was highly dependent upon Pakistan, Kabul had refused to recognize the Durand Line as the international border between Afghanistan and Pakistan.

Taliban 2.0 is far less dependent upon Pakistan for the security of its regime. It is much better prepared militarily to confront domestic enemies as it is in control of large caches of sophisticated arms, including drones, abandoned by the Americans and surrendered by the Afghan army. Its troops are also battle-hardened having fought the Afghan army and its American and NATO allies for years. Refusing to accept the Durand Line and encouraging Pashtun separatism on the Pakistan side of the border, which had been traditional ploys of Pashtun-dominated governments in Kabul from 1947 to garner domestic legitimacy, could again become a rallying cry for the Taliban leadership if it feels that its Islamic sheen is wearing off and is no longer able to provide legitimacy to its regime.

It should come as no surprise if Pakistan eventually comes to regret the Taliban’s victory in Afghanistan and to see its support for the group as a pact with the devil. However, this reality may take a while to sink in among the top decision-makers in Islamabad.

Mohammed Ayoob is University Distinguished Professor Emeritus of International Relations, Michigan State University, and a senior fellow at the Center for Global Policy. His books include The Many Faces of Political Islam and, most recently, Will the Middle East Implode, and he is the editor of Assessing the War on Terror.