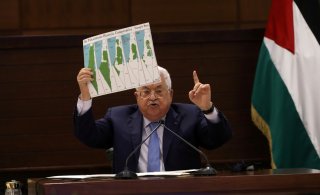 Recent developments in Israeli-Gulf relations, particularly the September 15 signing of the U.S.-brokered Abraham Accords between Israel, the United Arab Emirates, and Bahrain, were met with great fanfare among members of the international community. Coming on the heels of the proposed annexation plan that was to play an integral part of the Trump administration’s “Deal of the Century,” the agreements were seen as overtures, meant to place plans for West Bank annexation on indefinite hold. But while the agreements opened the door for normalization between Israel and other regional actors, it simultaneously did irreparable damage to the long-standing relationship between the Palestinian Authority (PA) and the ideologically moderate regional powers it has traditionally looked to in times of crisis.

The relationship between the PA and other Arab states has been complex, but generally speaking, the default stance of the Arab world has been firm support for the Palestinian cause. This has been the case throughout nearly every crisis of the past three decades; from condemning perceived Israeli excessive force in Gaza and decrying settlement expansion, to prominently supporting the PA’s failed 2014 pursuit of UN member state status. But the Gulf States’ shift to “peace for peace” signals an important change in their approach to foreign policy.

In addition to opening up new opportunities for economic and strategic cooperation against Iranian and Turkish revisionism, the accords are a coup on the Israeli-Palestinian front. PA Chairman Mahmoud Abbas called the signing “a stab in the Palestinians' back,” charging that “[the] Emiratis are denying the rights of the Palestinian people, the establishment of the future Palestinian state, as well as the issue of Jerusalem.” In the days following the signing, Abbas’ spokesman Nabil Abu Rudeineh issued an official statement saying, “In the upcoming days, the Palestinian leadership will adopt an important foreign political movement to confront any step arising from the UAE-Israeli normalisation agreement.” Seeing the need for a paradigm shift, the PA chairman has moved away from his perceived betrayers, hoping to instead form closer partnerships with Turkey and Qatar.

To rile up his religious-nationalist base, Turkish President Recep Tayyip Erdogan has channeled the history of the Ottoman Empire. In this context, he has invoked the 1920 Treaty of Sevres, which carved up the Ottoman Empire and vowed to “liberate Jerusalem from the Jews,” referring to the city as “ours” in a thinly-veiled allusion to Ottoman control of the city. This revisionist agenda has led Turkey to seek out footholds in any available regional vacuum. This includes attempting to strong-arm EU member state Greece to extend Turkish access to Mediterranean gas supplies, sending Syrian mercenaries to fight Turkey’s battles in Libya and beyond the region in Azerbaijan, and repeatedly violating Iraqi sovereignty in an attempt to rid the autonomous Kurdish Region of Northern Iraq of the PKK’s presence.

Yet while Turkish incursions in the rest of the region are new, Erdogan has for years sought to involve Turkey in the Israeli-Palestinian conflict and assume the mantle of defender of the Palestinians. Famously breaking off relations with Israel after the 2010 Mavi Marmara incident, Turkey has long tried to position itself as a go-between for Israel and Hamas. Turkey has repeatedly been rejected by Israel, who preferred regional interlocutors more closely aligned with its strategic interests such as Cairo. The PA’s sense of neglect has led it to reevaluate the role which Erdogan’s Turkey can play fighting in its corner.

In his quest for new allies, Abbas has sought to bring in Turkey as the region’s staunchest, and perhaps among the last, unconditional backers of the Palestinian cause. Turkey has shown its solidarity, both by opposing the Abraham Accords and by facilitating the bridging of internal divisions between the PA and Hamas. Palestinian attempts at reconciliation have been years in the making. Different now, however, is the fact that the PA feels itself all the more cornered due to a lack of Gulf support. In this context, Abbas expressed interest in hosting Turkish observers to oversee the planned elections, Hamas and Fatah reportedly agreeing to “consolidate the principle of peaceful transfer of power through free and fair elections, according to proportional representation.” Erdogan, recognizing an opportunity to make inroads as a significant actor in the Israeli-Palestinian arena, was happy to oblige.

Palestinian efforts to recalibrate their regional support base has also included roping in Qatar, which has been closely allied with Turkey since the Arab Spring. Qatar’s foreign policy has ostracized it from Saudi Arabia and the UAE, which blockaded Qatar in 2017 for its backing of Islamists, which both countries perceive as threats to domestic stability. Qatar’s alignment with Turkey is seen as a betrayal of the rest of the Gulf, and its hosting of Turkish troops is the ultimate confirmation of Turkish interference in ‘Arab affairs.’ The expulsion of Turkish troops from Qatar is the main demand of the Gulf states, and the Emirati Minister of State for Foreign Affairs Anwar Gargash went so far as to recently refer to Turkey’s presence in Qatar as a regional “emergency.” Qatar has for years been a mediator between Israel and Hamas, transferring millions to Gaza in just the last two years. Despite this, it has yet to play a significant role as an ally of the PA. This may very well change in the near future, particularly if further normalization agreements emerge.

The upcoming U.S. election will have a significant impact on how Abbas chooses to play his cards. While a Biden presidency may provide him with the ladder he needs to get down from the tree he currently finds himself in, restoring a more balanced U.S. policy on the conflict, a Trump win would certainly push him further into the foliage. A further game-changer would be if an eighty-five-year-old Abbas, currently in his fifteenth-year of a four-year term stepped down or was removed from power. However, even a Biden win might not provide Abbas with the assurances needed to gravitate back towards traditional regional allies. Although Biden win would provide the PA with a more sympathetic ear in Washington, a greater willingness by a Biden administration to engage with Iran may nevertheless continue to drive the regional actors the PA once relied on closer to Israel. The expected consequence of this would be a continued, perhaps even more successful, courtship of the PA by radicals Turkey and Qatar.

As it stands, it is not in the West’s interest to see a Middle East where revisionist actors such as Turkey and Qatar wield the greatest influence over the Palestinian cause. Turkey has rapidly drifted towards authoritarianism over the course of the last four years, having purged over 150,000 civil servants and set a world record for imprisoned journalists. Qatar, meanwhile, is a key state sponsor of terrorism and has given money to al-Qaeda affiliates in Syria and Libya. Recently, claims also surfaced regarding Doha’s alleged funding of Hezbollah, leading to an investigation by members of the U.S. State Department. In a certain sense, Abbas is following the strategy favored by his predecessor, Yasser Arafat, who historically overstated the potential of Soviet support to try and rope in further American support. By reaching out to Turkey and Qatar, Abbas is creating the illusion of a pivot in the hope of frightening policymakers in both the United States and the Gulf. But the international community should not be misled by President Abbas’s diversionary tactics.

Normalization is less a victory for Israel than it is for sheer pragmatism. Former Saudi Ambassador to the United States Prince Bandar bin Sultan summed up the Saudi view: “The Palestinian cause is a just cause, but its advocates are failures.” Time after time, the Palestinian leadership has backed the wrong horse and failed to deliver political or economic results. As Prince Bandar identified, it seems like the Palestinian leadership, by looking to today’s revisionist powers, is following the historical trend of hoping for assistance from Hitler’s Germany, the Soviet Union and Saddam Hussein’s Iraq. “The Palestinian leaders have come to regard Tehran and Ankara higher than they regard Riyadh, Kuwait, Abu Dhabi, Dubai, Manama, Oman, Muscat, and Cairo” said Prince Bandar in this regard. Normalization signals that enough is enough. And the reality remains that without American mediation, an Israeli-Palestinian agreement cannot be reached. Erdogan can rattle his saber, and the Qataris can deploy their vast wealth, but both rely on the United States for political and diplomatic support. Turning to Turkey and Qatar is not going to consolidate the Palestinian position; it is the diplomatic equivalent of sulking.