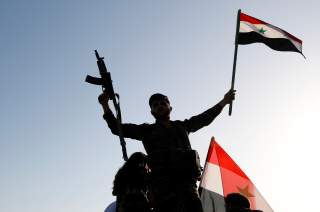 After more than seven years of devastating war, Bashar al-Assad suddenly changed his tune: “We encourage every Syrian to come back to Syria,” the Syrian leader implored during a recent interview with Russian journalists. Less noticed was the degree of his specificity. “So we’ve been encouraging those refugees, many who have their own business, not only refugees in different countries,” to come back to Syria.

Assad may be joining with Russian president Vladimir Putin in calling for Europe to rebuild Syria and facilitate the return of refugees, but he is busy ensuring that it only applies to those who can make money for his regime or those who can provide rewards to his loyalists and outside state-sponsors, such as Iran and Russia.

The once-beleaguered Syrian leader understands that business as usual won’t suffice to replenish the state’s depleted coffers, much less rebuild the country. For starters, too many Syrian businesses and businessmen are under U.S. or EU sanctions. He’d like to rely on public-private partnerships through private investors and local Syrian banks but that presents another problem. Most of the wealthy Syrians left the country during the war and the local banks are in no condition to lend money. As Jihad Yazigi, founder of The Syria Report put it, by June 2017 “the combined assets of Syria’s fourteen private-sector banks stood at $3.5 billion, which is less than a 10th of the assets of a single large bank in Lebanon or Jordan, such as Bank Audi and Arab Bank.”

To work around this problem, Assad is looking to create a new cadre of wealthy associates tied to his regime who can either finance various rebuilding efforts or more importantly, provide a new face to secure international investments for reconstruction projects. Assad is hoping the lure of guaranteed financial returns will entice these wealthy Syrians to set aside past differences, overlook the lack of a political solution to the demands of the war, and join his vision of a new Syria.

So far there are a lot of takers. As Rashad al-Kattan, a political and security risk analyst and fellow at the Centre for Syrian Studies explained, “some Western governments have been visiting Damascus to restart those relations bilaterally outside of the EU framework.” Meanwhile, the EU has said that it wants to contribute to the “stabilization and early recovery of areas where violence has decreased.” That is despite Assad previously playing hard-to-get, telling Belgian media in February 2017 that the EU should have no role in Syria’s reconstruction.

There is little doubt it will require a herculean effort to rebuild the physical structures destroyed during the Syrian war. Take the housing sector, for example, since Bashar suddenly appears eager to welcome home Syrian refugees and ex-patriots: A recent study by the World Bank that focused on ten Syrian cities found that 27 percent of the housing stocks were either destroyed or partially damaged. That number increases to 31 percent in Aleppo, Syria’s second largest city. According to the latest United Nations estimate, the overall damage and destruction caused by the war reaches a whopping $388 billion.

At this time, however, the available evidence suggests that a massive influx of international investment will only line the regime’s pockets with money and provide rewards to Russia and Iran just as all three are strapped for cash and unable to pay for reconstruction. In other words, rather than helping the Syrian people who need the assistance the most, such financing would constitute a pressure release valve from economic sanctions on those whose behavior the United States seeks to influence the most.

Legislating the Theft of Property

Knowing this day would come if he managed to survive, Assad already had a plan in place. In September 2012, Decree 66 became law, allowing the government to “redesign unauthorized or illegal housing areas” and replace them with “modern” real estate projects with quality services. Assad used it to expel the populations of Basatin al-Razi (in the Mezzeh district of Damascus) along with those in and around Daraya, a southwestern suburb of the Syrian capital. The inhabitants of both areas supported the regime’s opposition, whereas similar working and lower middle class populations were left untouched in locations where they supported the regime. The same process is underway in Homs and Aleppo.

New legislation ratified in 2018, such as Law No. 10, provides added teeth to the government’s effort to enforce Decree 66. It does so not only by empowering the regime to designate areas inside Syria for development, but by giving property owners thirty days to seek out a local administrator and file an ownership claim. In most cases, those that own the property have left because of the war and can’t return within a month—and that’s assuming they are even aware their property has been “designated” by the government in the first place and that they had the foresight to flee with their ownership documents in hand.

Given that there are eleven million Syrian refugees living outside the country or internally displaced in what today constitutes the world’s largest forced human displacement crisis since World War II, one can begin to realize the scope of the problem this scheme presents, to say nothing of the fact that the war is still ongoing. The refugees that don’t make it back will simply have their property confiscated, repossessed, or repurposed. Those that do return might be able to claim an insufficient amount of compensation but the regime will take away their land and property just the same.

There are reports in The Guardian and elsewhere of “a systematic torching of Land Registry offices in areas of Syria recaptured on behalf of the regime,” so even if returning refugees manage to make the thirty-day deadline with property ownership papers in hand, they can still be denied. In other cases, the Assad regime presents residents of newly reconquered areas their choice of capitulation. They can either be shipped off to the next inevitable battleground or sign various reconciliation agreements.

Syria’s National Hue According to Assad

In reality, the refugee repatriation scam and reconstruction ruse are part of a system designed to prevent refugees from returning and to enrich and further entrench the Assad regime. And it goes well beyond any single attempt to recoup losses or deliver economic rewards to loyalists. Assad provided a glimpse of the rationale animating this policy: “It’s true that we lost the best of our young men as well as our infrastructure . . . but in return we earned a healthier, more homogeneous society—in a literal sense, and not as flowery words or lip service,” Bashar declared in a speech before the Syrian Foreign Ministry in August 2017. He elaborated further:

In this sense, Syrians who are not fully behind the regime are not only preventing the coalescence of a purer national hue; they are considered terrorists. In a recent intelligence officers meeting, the head of Syria’s Air Force Intelligence Directorate, General Jamil Hassan, explained that the regime has prepared a list of three million wanted persons both inside and outside Syria. The leaked details from this meeting were reported by The Syrian Correspondent news site and contained a discussion over the next phase of the conflict. “We will hold accountable anyone involved by word, deed or even silence,” General Hassan said, referring to his claim that 150,000 businessmen are involved in financing terrorism. “We will treat them like sheep; get rid of the damaged ones and leave the good ones. . . . Syria after eight years will not accept the presence of cancer cells in it. Ten million obedient ones are better than 30 million terrorists.”

Yet another step that puts into practice these official sentiments can be seen in southwest Syria. The Lebanese paper, Al-Modon, recently published a copy of the forms the regime forces upon the residents and it goes well beyond declaring one’s oath not to attempt to overthrow the Assad family dynasty. The signatories must agree not to protest outside the elastic confines of the law and refrain from publishing written content that insults the government. Furthermore, they have to disclose the details about their involvement in past protests—including their family members—and provide personal information such as their passport numbers and electronic accounts, which undoubtedly refers to their online social media accounts.

With Team Assad having also relied on siege and starvation tactics to force residents to flee, many return to find their homes taken over by pro-regime and Iranian settlers. This repopulation plot is particularly pronounced between Damascus and Lebanon, where Iran and its Lebanese branch, Hezbollah, consider this resettlement as payment in part for the military services it rendered. This scheme will likely continue further southwest near Jordan and Israel, now that pro-Assad forces cleared most of those areas. For Iran, the area represents an enticing location to project power. For Bashar, however, this scam lays bare the lie that the homogeneity and “single national hue” he hopes to achieve throughout the country isn’t even Syrian.