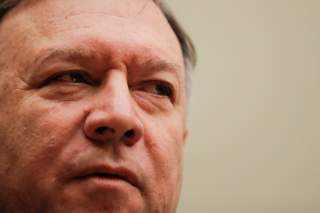 Secretary of State Mike Pompeo flew to Qatar on Feb. 29 to celebrate the U.S. peace deal with the Taliban. The deal might provide cover for the United States to withdraw its troops from Afghanistan, but it will not bring peace.

Rather, the deal empowers the Taliban at the expense of Afghanistan’s elected government. It is easy to talk about intra-Afghan dialogue, but the Taliban were not fighting to be part of the democratic order but rather to overthrow it. This is why Taliban leaders have already announced they will keep fighting the elected Afghan government as the United States withdraws its forces. Taliban leaders know that if they competed at the ballot box, they would likely not achieve more than five percent of the vote. Afghans broadly speaking do not want to live under the Taliban’s conception of an Islamic emirate with an unelected leadership imposed from above. Pakistan, meanwhile, has been willing for decades to fan the flames of extremism in the belief that promoting Islam as the chief source of identity in Afghanistan will diminish the threat Afghan and Pushtun nationalism might pose to Pakistan’s own unity.

Alas, Afghanistan is not the only country in which the State Department’s default position has been to support Islamist extremism. Consider Libya: Neither Fayez al-Sarraj, chairman of the Presidential Council of Libya and prime minister of the Government of National Accord of Libya; nor Khalifa Haftar, commander of the Libyan National Army whose coalition dispute Sarraj’s legitimacy and also control the bulk of Libyan territory.

Neither Sarraj nor Haftar are paradigms of good governance. But Sarraj is an unrepentant Islamist backed by the Muslim Brotherhood-promoting leaders in Turkey and Qatar. In recent months, Turkey has taken its proxy fighters from Syria—some of whom are actually veterans of the Islamic State—and sent them to fight on Sarraj’s behalf against Haftar, who is supported by U.S. allies in Egypt and the United Arab Emirates. Leaders in Cairo and Abu Dhabi are right to question just where the United States stands when the State Department is supporting radical Islamists against their efforts to stabilize Syria on a more secular basis. This does not mean that the United States should get militarily involved in a messy proxy war but diplomatically Foggy Bottom’s default position should always be to support the secular alternative, especially when neither side can reasonably claim to represent democracy and rule-of-law.

Then, there is Somalia, a country in which the State Department has committed more than $1.5 billion dollars in U.S. taxpayer money this year, both in direct aid and debt forgiveness. Donald Yamamoto, the U.S. ambassador to Somalia, has invested disproportionately in Farmajo, a former housing authority worker from Buffalo, New York, who has served as Somalia’s president since his selection three years ago in a closed election involving only 400 people. The problem is that the more aid Yamamoto has offered Farmajo, the more he has diverted it to his own political war chest and the less interest he has shown in targeting Islamist terror.  It should therefore not surprising that the chief result of the Yamamoto policy has been the resurgence of the Al Qaeda-affiliated al-Shabaab. Last year, Farmajo was caught on tape urging al-Shabaab to attack his opponents abroad. The terror group now taxes citizens within sight of Somalia’s presidential palace, runs courts to which Somalis turn preferentially, and issues permits for construction and license for businesses in the capital, many of which are paid for with the international aid Pompeo’s State Department supports. Again, the State Department appears to have positioned itself on the same side as Qatar and Turkey. Fahad Yasin, Somalia’s intelligence chief, is a former al Jazeera journalist who Somali parliamentarians say openly brags about serving as Qatar’s bag man and is Farmajo’s biggest supporter. Turkey donates hundreds of millions of dollars to Farmajo’s government, although altruism may not be President Recep Tayyip Erdoğan’s motive. Last week, the Farmajo government used special forces trained by Turkey and armed with weaponry brought with international aid to attack and capture the leadership of the Sufi-oriented Ahlu-Sunna Wal-Jamaa, a group which was instrumental in the defeat of al-Shabaab in Somalia’s central Galmudug state. This was the same state that Yamamoto earlier effectively undercut elections in order to impose a Farmajo flunky. In effect, this puts the State Department’s favored Somali politician, Erdogan, and al-Shabaab on the same side and in opposition to the Somalis who are fighting Al Qaeda.

Meanwhile, in Syria, Special Envoy Jim Jeffrey continues his jihad to empower Turkish-backed forces who have sided at times with Al Qaeda and the Islamic State, and to disenfranchise secular Kurdish groups who did the bulk of the on-the-ground fighting against the Islamic State, losing 10,000 of their own members in the process.

Conservative Republicans once castigated the Obama administration for giving space to the Muslim Brotherhood. Alas, Obama’s Islamist outreach—as ill-conceived as it was—seems positively mild when compared to the empowerment of extremists which now seems to be the norm within Pompeo’s State Department.