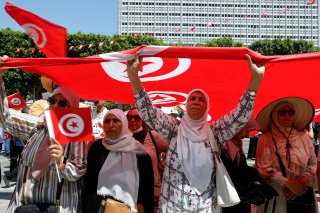 The National Salvation Front, a Tunisian opposition coalition, led a rally in downtown Tunis on Sunday to protest against the country’s new draft constitution, which is scheduled to face a nationwide vote on Monday and is widely expected to pass despite political opposition.

The draft constitution, proposed by Tunisian president Kais Saied, is similar to the country’s previous constitution, ratified in 2014, but includes several changes to strengthen the country’s presidency and diminish the power of its parliament. Saied’s pursuit of a new constitution comes after his suspension and dismissal of Tunisia’s Parliament in July 2021, followed by his dissolution of the country’s Supreme Judicial Council. Tunisian opposition leaders have characterized these actions as a coup d’etat and have argued that all of Saied’s actions since the power grab, including attempting to pass a new constitution, are unconstitutional and undemocratic. A member of the National Salvation Front’s executive committee told the Qatari state-run Al Jazeera media network that the constitution was “completely illegitimate” and “another link in a series of illegal events” stretching back to July 2021.

Opponents of the proposed constitution have also alleged that it concentrates far too much power in the hands of the president, turning him into a quasi-dictator at the expense of the checks and balances built into Tunisia’s 2014 constitution. Saied and his supporters, however, have argued that Saied’s actions to concentrate executive power, disrupting the country’s unruly parliament, were essential to preserve the gains made since the Arab Spring and revitalize Tunisia’s struggling economy. Although Saied’s actions have been widely criticized abroad, he continues to enjoy a base of support within Tunisia; in the weeks following his suspension of parliament, roughly four out of every five Tunisians surveyed supported his actions, although this number has since sharply decreased.

The president has placed much of the blame for Tunisia’s problems on Ennahda, the moderate Islamist party affiliated with the regional Muslim Brotherhood movement, and its leader Rached Ghannouchi.

Although the anti-Saied protests over the weekend remained largely peaceful, they were preceded by a series of more confrontational demonstrations on Friday night. Police broke up that demonstration, leading to several arrests. In the aftermath, the Ministry of the Interior claimed that the protesters had initiated the fighting, which Tunisia’s opposition denied. The Tunisian General Labor Union, an opposition-affiliated trade union, claimed that it would “hold the president accountable for this authoritarian deviation” and demanded the release of the protesters.