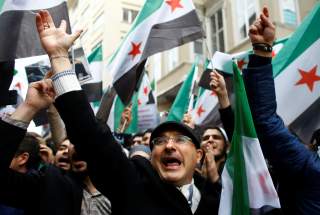 President Donald Trump announced his plan to withdraw U.S. troops from Syria in his usual way, via tweet. It wasn’t a good way to do diplomacy, but everyone should be used to it by now. Nevertheless, Washington’s policy community went mad.

The “caterwauling,” as Secretary of State Mike Pompeo might put it, was extraordinary. You would think that it was Munich all over again, the United States lost the Cold War, or Gen. Douglas MacArthur had signed America’s surrender aboard the battleship Yamato in San Francisco Bay.

Worse, his own officials went to work to thwart his wishes. National Security Adviser John Bolton suggested that there were conditions for a withdrawal, meaning nothing had really changed.

However, the Pentagon says plans for pulling out are proceeding. It appears the president is determined to ignore his critics, who have deployed a gaggle of truly awful arguments against the policy.

For instance, warned Jake Tapper, the pull-out would “hand a strategic victory to our Syrian, Iranian, and Russian adversaries.” Other critics pointed to the Islamic State and Recep Tayyip Erdogan’s Turkey as beneficiaries. However, these countries and groups might assess their interests differently.

For instance, Washington’s 2200 personnel do little to constrain Russia. Perhaps Moscow enjoys seeing America indefinitely entangled amid Sunni/Shia/Kurdish/Turkish/Al Qaeda/ISIS complications. Ankara—and even Damascus—might prefer that the United States take out the remnants of the Islamic State, rather than leave the job to them.

If we are keeping international count, then we should ask how Washington’s chief potential rival likely sees the issue. China said nothing, but probably desires Washington to be forever lost in wars, conflicts, confrontations, sanctions, and more in the Middle East—perhaps even squandering another $6 trillion on peripheral fights. Forget subjective opinion: it is objectively better for a state hostile to Washington that the latter continue focusing its personnel, materiel, and attention on peripheral issues such as Syria.

By the same token, unsurprisingly, America’s allies oppose the president’s decision. France’s Emmanuel Macron, for instance, said he wanted America to be “reliable” and stay. That is no argument for doing so, however. Of course Paris wants Washington to deal with the problems of Syria, ISIS, and, well, most everything else. So do the rest of the Europeans, who ostentatiously underinvest in their militaries.

The standard for U.S. policy should be what is in America’s interest. To simultaneously elate Warsaw and discomfit Moscow, Washington could increase military outlays ten-fold and station its entire armed forces in Poland. The president could send the entire navy to steam along North Korea’s coasts, mightily gratifying Japanese prime minister Shinzo Abe and annoying Supreme Leader Kim Jong-un. That doesn’t mean doing either one would be to America’s advantage, however.

Another claim is that withdrawal would create a void, which will be filled by others. Even if so, not all voids are created equal. Imagine a collapse in Mongolia’s government. Surrounded by China and Russia, one or both might quickly “fill the void.” Does that mean America should send in the 101st Airborne to take control? Whatever the humanitarian implications of a “vacuum” occurring there, it would have no noticeable impact on America’s security.

Syria never has mattered much to the United States. Throughout the Cold War the Syrian Arab Republic was allied with the Soviet Union. Damascus’ military forays against Israel were sharply rebuffed and punished. Most recently the Israelis destroyed a Syrian nuclear reactor and launched air raids into Syria, without retaliation. Any “void” simply means a weaker hostile government. America gains nothing rushing into the final stages of a multisided civil war without any significant impact on the United States. If the Russians or Iranians want to fill any void, let them enjoy the certainly costly and likely lengthy commitment that results.

Oft repeated is the claim that we fight them over there so that we don’t have to fight them here. It is a nonsensical, even silly argument, since terrorism against America (many nations were targets long before the United States) rose with Washington’s military intervention and social-engineering abroad. Al Qaeda’s members were not angry over freedom of speech in America, but Washington’s involvement in their nations. Al Qaeda in Iraq, which morphed into ISIS, grew out of America’s invasion. The Times Square bomber, a Pakistani-American, pointed to U.S. drone strikes in his ancestral home as justification for his actions.

In fact, ISIS was focused on creating a caliphate, or quasi-country, and broke with Al Qaeda over the latter’s focus on the enemy beyond. For the Islamic State terrorism became a weapon. For instance, in the aftermath of the horrific November 2015 strike in Paris, President Francois Hollande declared: “we are at war.” But France had been attacking ISIS, even bombing the group’s capital of Raqqa, for months. Far from preventing a terrorist assault, the Hollande government invited it. The Islamic State had no air force with which to retaliate, so the group chose terrorism. Most of the later terrorist attacks committed in its name were by local residents inspired by its example. Ironically, crushing the caliphate could shift the Islamic State’s focus entirely to terrorism.

A surprising number of commentators have suddenly discovered the Kurds. Denied their own nation, this people group was long slaughtered in Turkey without a peep from Washington, which instead acted as Ankara’s chief armorer. The United States imposed a no-fly zone over the Kurdistan region of Iraq, but primarily to weaken Saddam Hussein; Washington consistently opposed Kurdish independence. Even as ISIS rose the United States insisted on funneling weapons through Baghdad, which still claimed authority over the autonomous territory.

When Kurdistan made an ill-considered vote on independence a year ago, Washington stood by as Iraq’s central government closed the zone’s airspace and struck militarily. Turkey and Iran further isolated the Kurds. Earlier this this year, aided by supposedly moderate Arab insurgents, Ankara attacked the Syrian town of Afrin and surrounding territory, home to Kurdish militias cooperating with Washington against ISIS; U.S. troops stood aloof.

The Kurds know this history and can have no illusions about Washington’s support beyond fighting ISIS. Indeed, working with the Kurds against the latter was in their interest, too, and did not warrant promising to defend them. And who made such a commitment? Just as only Congress can authorize intervention in a war, only Congress can approve a new defense guarantee.

Nevertheless, the president’s detractors, including John Bolton, insist that his administration should maintain a small contingent, illegally occupying roughly one third of another country, to defend an unofficial group in a civil war against the legitimate national government and neighboring nation. In fact, that nation claims, with some justification, that the militias are linked to domestic insurgents. This commitment would be indefinite—necessary as long as Assad wants to reclaim control of the nation, the Turks intend to crush any separatist threats, and Iran and Russia commit to rebuild Syria’s strength. What could possibly go wrong from turning Syria into another branch of the forever war?

For some Trump critics, all roads lead to Tehran, at least in the minds of those who imagine a few Americans with their Kurdish friends, like the ancient Spartans at Thermopylae, preventing Iran from developing a “Shia crescent” or “land-bridge” from Tehran to the sea. But directly countering Iran, badly outnumbered by well-armed U.S. allies, is not Washington’s responsibility. Moreover, will American forces in Syria attack any Iranians who come into range in another country? And will those actions have the blessing of that country’s government?

Equally important, will Kurdish troops fight Iranians, especially with Turkey the more proximate enemy? A deal with Damascus might look more attractive, whatever Washington’s intentions, since Syria’s military could retake control of the border. Even if the U.S.-Kurdish condominium survived, it wouldn’t stop Damascus and Tehran, both threatened by America, from working together. Both possess airplanes, while land transit also is possible through Iraq. Iran certainly isn’t going to surrender to U.S. dictates.

Moreover, absent all-out regional war, Iran is unlikely to use its access to Syria to attack Israel. Syria, a majority Sunni nation, cooperates with Tehran out of necessity and has no interest being dragged into a conflict with Israel after staggering through more than seven years of devastating civil war. Additionally, Iran’s presence in Syria does not reduce the lethality of Israel’s deterrent. Rather, Tehran’s expanded reach, like its missiles, primarily enhances its deterrence against attack.

Another awful argument is that American credibility will suffer. Leaving Syria means the North Koreans won’t take the United States seriously, according to one argument. Putin will see the Baltic States as easy pickings, according to another.

However, who would confuse the essentially helpless Syrians with Pyongyang, which possesses both conventional and (we presume) nuclear deterrent? Objectively, the North would prefer that America fight as many wars as possible in the Middle East. That experience is likely to make Washington warier of starting a war against a better-armed power on the Korean Peninsula. The same for Russia versus Ukraine. Moscow possesses a substantial conventional force and an equivalent nuclear arsenal. Washington’s willingness to beat up on Syria won’t frighten the Putin government.