President Trump's 'Deal of the Century' Would Be a Historic Mistake 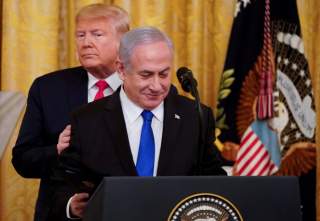 President Donald Trump has unveiled his “Deal of the Century” and it is—for Israel.

In the past the Palestinians have been said to never lose an opportunity to lose an opportunity. In this case the opportunity is entirely Israel’s, and even more directly, Prime Minister Benjamin Netanyahu’s. Neoconservative Max Boot called the initiative “a PR campaign, not a peace plan.”

Any proposal brokered by Washington should be immediately suspect. There is no pretense that American policymakers are objective or balanced: Israel is a political “third rail,” enjoying extraordinary favor among many Democratic and most Republican policymakers. Recent presidents made little effort to offer a balanced policy, irrespective of their rhetoric.

Certainly, President Trump has not done so. His plan envisions immediate Israeli territorial gains with the annexation of settlements dispersed throughout the West Bank. Israel would forever control not only Jerusalem—the Palestinians would be left only with some city outskirts—but also their borders and airspace. The latter is even presented as a benefit to the Palestinians, since they could rely on Israel for security rather than spending on their own forces!

However, only in several years, after the Palestinian Authority met unrealistic standards imposed by the U.S. and Israel, would a fragmented statelet be created. Then unnamed, unidentified parties not privy to the agreement would pour $50 billion into economic development of the Palestinian territories.

Of course, a plan developed by American partisans of Israel and the Netanyahu government favors Israel. Indeed, reported the Jerusalem Post: “The broader ideas of the plan are similar to ones Netanyahu has long touted.” The main difference is “that the White House is behind his vision this time.” Observed Israeli Daniel Levy, president of the U.S./Middle East Project, “Only the Israeli side is deemed worthy by the American plan of empathy, of having its historical claims and justification to the land and to nationhood embraced.”

The faux Deal of the Century was released shortly ahead of the next round of Israeli elections, in which Netanyahu is desperately attempting to gain a majority to reelect him and shut down the prosecution against him for corruption. At the plan’s release, he announced that Israel would “apply its laws to the Jordan Valley, to all the Jewish communities in Judea and Samaria, and to other areas that your plan designates as part of Israel.” Boot called this “an Israeli power grab and land grab.”

The proposed Palestinian entity is not a state as commonly understood. Rather, it would be entirely dependent on Israel’s goodwill. The Palestinian Authority would not even have control over territory within. The administration plan states: “The Israeli population located in enclaves that remain inside contiguous Palestinian territory but that are part of the State of Israel shall have the option to remain in place unless they choose otherwise, and maintain their existing Israeli citizenship. They will have access routes connecting them to the State of Israel. They will be subject to Israeli civilian administration, including zoning and planning, within the interior of such Israeli enclaves. They will not be discriminated against and will have appropriate security protection. Such enclaves and access routes will be subject to Israeli security responsibility.”

This Palestinian gerrymander bears a distinct resemblance to the ten South African “Bantustans,” or homelands, created to enhance Apartheid against black South Africans while providing a pretense of self-rule. Palestinians would be similarly disadvantaged, segregated, and subjugated, their isolated cantons stitched together through “bridges, roads and tunnels.”

Moreover, the Palestinian creation is dependent on conditions unlikely to be met. For instance, Hamas, which controls Gaza and is beyond the Palestinian Authority’s control, must disarm, renounce a “right of return” for Palestinian refugees, and accept Israel as a Jewish state. To say this is unlikely is a stunning understatement.

Moreover, stated the plan: “The Palestinians shall have implemented a governing system with a constitution or another system for establishing the rule of law that provides for freedom of press, free and fair elections, respect for human rights for its citizens, protections for religious freedom and for religious minorities to observe their faith, uniform and fair enforcement of law and contractual rights, due process under law, and an independent judiciary with appropriate legal consequences and punishment established for violations of the law.” The economic system must be similarly pristine.

These are reasonable requirements for all governments. However, what Middle Eastern nation meets these criteria? Even Israel is backsliding on civil libertarian norms. And who decides that the Palestinians have met these conditions, years after Israel has annexed, forever, all the areas that it desires? Israel and its primary benefactor, the U.S.

Trump famously promised $50 billion of commercial investment. This from a president who might not be in office a year from now. And one who has routinely trashed earlier agreements and treaties. Worse, there is no guarantee that anyone else will provide the money.

The plan simply offers “the potential to facilitate more than $50 billion in new investment over ten years.” Even if Palestinians accept their role as docile Israeli dependents, which seems unlikely, what company will invest in a territory and region likely to be no less unstable and violent years in the future. What government will toss aid at the Palestinians after they have abandoned all leverage and agreed to submit? Promises to double the GDP are fantasies based on nothing at all.

If there is an argument for the agreement, it is that the Palestinians have lost, Israel is supreme, Arab governments have dropped the pretense that they care about the issue, and Washington has abandoned the slightest veneer of balance. Indeed, the Trump administration spent the last three years imposing its version of “maximum pressure” on the Palestinians. That was not enough to force their surrender, so along with the plan the president threatened them with the loss of any concessions, opining that “this could be the last opportunity they will ever have.”

Perhaps the president is unaware of what his administration is proposing. After all, he said: “it is only reasonable that I have to do a lot for the Palestinians, or it just wouldn’t be fair.” How else to explain the Misdeal of the Century? The result of this initiative will be neither peace nor prosperity. Washington might not be able to deliver a better future to the Palestinians, but it should not lock them into a worse one.

Doug Bandow is a Senior Fellow at the Cato Institute.  He is a former Special Assistant to President Ronald Reagan and author of several books, including Foreign Follies: America’s New Global Empire.