President Trump's Mistake: Maximum Pressure Is a Path to War with Iran 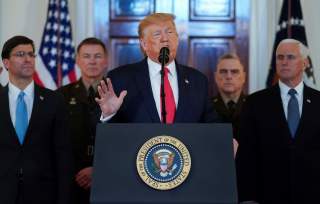 Maximum pressure was supposed to moderate Iranian behavior and force the Islamic Republic to capitulate to a litany of demands. Instead, it has made them more belligerent, as realists have long predicted, and brought us to the brink of war this month. Close calls aren’t a bug in maximum pressure—they’re a feature.

Consider just this one series of escalating actions and reactions that almost resulted in war.

On 27 December, a U.S. contractor was killed and three American service members wounded in a rocket attack at an isolated base in Iraq. Though no group claimed responsibility, American jets pounded five separate bases of Kataib Hezbollah, an Iraqi government-sanctioned militia of the Shia Popular Mobilization Forces (PMF), killing 25 and wounding another 51.

Outraged members of Kataib Hezbollah and other PMF groups stormed the U.S. embassy in Baghdad for two days, causing damage to the perimeter but no harm to Americans. By January 1st relative calm had returned.

Events took an explosive turn in the early hours of January 3rd, when a U.S. drone took out Iran’s popular general, Qassem Soleimani, on Trump’s orders. At the moment of Soleimani’s death, the decision about whether the United States would be plunged into war rested not in Washington, not with the Pentagon, and not at the White House. We held our collective breaths to see what Iran’s reaction would be, hoping they would choose not to kill Americans, as many Iranian figures had threatened.

We know now that Iran’s retaliatory missile strikes were precision strikes that hit exactly what they targeted—empty buildings and facilities—and that Tehran gave Baghdad advance warning allowing us to get our troops out of harm’s way. This time, Iran chose not to further escalate, allowing Trump to follow suit and end this current crisis short of war.

If we maintain maximum pressure as our guiding strategy, however, the next time—and there will be a next time if we don’t change course—we may not find ourselves in a shooting war.

What we must do at a minimum, to limit our risk to potential Iranian counterattack, is to withdraw all U.S. troops from both Iraq and Syria. Despite what the architects of the past 18 years of military failure in the Middle East will say, bringing our troops home is not a sign of weakness.

To the contrary, it is a sign of wisdom and strength, signaling the rational objective of preserving the lives of our service members and retaining the ability to strike anywhere in the region with our global ISR-Strike capabilities. By any rational assessment, a troop withdrawal from the Middle East is long overdue.

Trump gave the troops an achievable military mission in early 2017: destroy the ISIS caliphate and rout them from Raqqa and Mosul. Those objectives were fully met by early 2018 and by all rights we should have brought them home then. Now the troops have no achievable mission.

They are not performing any mission that is, in any way, related to the security of our homeland. They are instead sitting in the desert with a target on their back, waiting to find out if Iran or any rogue elements in Iraq will attack them. That is a misuse of America’s military—it places their lives daily at unnecessary risk, and it is time to bring them all home. Even Iraq no longer wants us there.

Iraqi Prime Minister Adel Abdul-Mahdi requested last week that a delegation from the U.S. come to Baghdad to "lay down the mechanisms for implementing" the withdrawal of American combat troops from Iraq. State Department spokesperson Morgan Ortagus countered that, “any delegation sent to Iraq would be dedicated to discussing how to best recommit to our strategic partnership—not to discuss troop withdrawal.”

That position is a mistake that could cost the lives of U.S. troops who would otherwise not have died. For the preservation of our fighting force and to lower our risk from potential future retaliation out of Iran, Trump must resist the advice of those who have been most responsible for the failed war policies of the past two decades and withdraw our troops from Iraq and Syria.