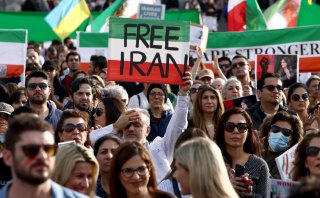 A new round of anti-government demonstrations erupted in the Iranian city of Marivan, a border city within the country’s northwestern Kurdistan province, after the death of thirty-five-year-old Marivan native Nasrin Ghaderi at the hands of Iranian security forces.

Before her death, Nasrin, aged thirty-five, was studying for a doctorate in philosophy at a university in Tehran. She reportedly attended an anti-government demonstration in the Iranian capital last week, at which security forces struck her severely in the head. After a brief coma, Ghaderi died on Saturday, prompting further unrest across Kurdistan.

Iranian state media, which has sought to downplay the casualty count from the ongoing nationwide protest movement, claimed that Ghaderi had died from “poisoning” without elaboration. An Iranian prosecutor also claimed that Ghaderi had a heart condition, which he suggested had helped to cause her death. Although Ghaderi’s parents officially supported the government’s version of events, outside observers have noted that it has used coercion to cover up the deaths of other Iranians killed during the protests.

Iran’s ongoing protest movement was initially sparked by the death of Mahsa Amini, a twenty-two-year-old Kurdish woman from Saqqez, Kurdistan’s provincial capital, after her arrest by the country’s morality police for failing to wear a headscarf properly. Although police insisted that Amini had a heart attack while in custody, eyewitnesses claimed that the police had beaten her, leading to brain damage and her death three days later.

Initially confined to Saqqez and its surrounding cities, the protests quickly spread across the country, blooming into Iran’s most widespread anti-government demonstrations since the Green Revolution in 2009. Although previous protests have primarily been motivated by particular political or economic grievances, such as fuel price increases in 2019 or a lack of access to water and electricity in some parts of the country in 2021, the current protests are explicitly targeted toward overthrowing Iran’s clerical government.

Consequently, seeing the movement as an existential threat, the Iranian government has launched a wide-ranging crackdown on the protests, deploying both police and the Islamic Revolutionary Guard Corps’ (IRGC) Basij militia units to combat them and cutting off Internet access throughout the country. The country’s justice system has also begun the first trials of arrested protesters and is expected to issue severe punishments to deter other demonstrators wishing to avoid arrest.