Putin is Betting on a Losing Horse (As In Iran) 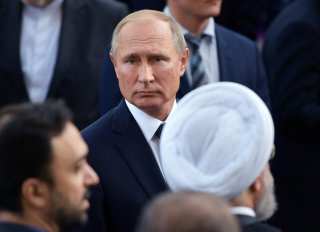 The Russian-Iranian alliance, a defining feature of power politics in the Middle East, is experiencing strains that should be exploited by the Trump administration. Moscow and Tehran are historic enemies whose differences are re-emerging now that they have achieved their mutual objective of preventing a breakdown of the Bashar al-Assad regime in Syria. Vladimir Putin’s assessment of Russian interests may be clouded by anti-Americanism, but he ought to see that Islamic Republic is far weaker and a far less valuable ally than it was just five years ago. Thus, Russia has far more to lose than it has to gain by employing its Security Council veto to protect the Iranian regime from Washington’s maximum pressure campaign.

By working together to ensure the survival of the Assad regime, Russia has arguably become the paramount foreign power in the Levant, while the Islamic Republic has carved a corridor of influence stretching from Iraq to Lebanon. Yet Russia and Iran may be beginning to see each other as competitors now that Assad’s regime is more secure.

Historically, Iranians have viewed their larger northern neighbor as an imperial aggressor rather than a friendly nation. The history of Russian-Iranian relations is replete with armed conflict, Russian interventions in Iranian politics, and cultural/religious animosity between the two people. To this day Iranians speak bitterly about the Treaty of Turkmenchay in which Iran lost a large part of its territory to the Russian empire. In the 1980s, the Islamic Republic vilified the Soviet Union as the “Lesser Satan” (as compared to the Great Satan in Washington), yet the U.S. victory in the Cold War gradually drew Moscow and Tehran together. The two countries share an intense fear of America pushing for regime change in Iran, with Moscow additionally concerned that the fall of the Islamic Republic could lead to a more pro-American and anti-Russian government.

The current Russian-Iranian alliance in Syria owes its existence to General Qassem Soleimani, the chief of the Revolutionary Guards’ specialized Qods Force and the regime’s strategic mastermind who was recently killed by U.S. forces. Soleimani’s clandestine visit to Moscow in July 2015 initiated the military partnership to save Assad. Soleimani’s proxy army of foreign Shi’a militias were able to defeat the Syrian insurgents only with the help of the Russian air force.

Yet now Moscow is attempting to take over Iranian proxies while challenging Iranian dominance in key parts of Syria, including the restive Dera governorate in the south. Iran’s usefulness to Russia has decreased significantly as the two powers fight over the spoils of their Syrian war. Already, Moscow has edged out Tehran for control of key resources, such as Syria’s phosphate mines. This past January, Soleimani’s death eliminated a key node in the Russian-Iranian partnership. His successor, General Esmail Ghaani, does not possess the charisma, skills, and foresight to hold the partnership together.

Syria aside, the Islamic Republic is much weaker than it was at the time of Soleimani’s trip to Moscow. The regime has faced successive rebellions since December 2017, including nationwide protests in November 2019 that shook the regime to its core. Iran’s economy is mired in a deep multi-year recession thanks to U.S. sanctions and the COVID-19 epidemic while the regime’s proxies in Iraq and Lebanon face unprecedented popular revolts.

Putin should recognize that the geopolitical balance in the Middle East may be approaching a tectonic shift. The Islamic Republic is likely to face additional popular rebellions, both at home and across the region. Russian arms sales to a cash-strapped Iran will be less rewarding than cooperation with wealthier Arab states of the Persian Gulf and better relations with Israel. Even if it were willing to try, Russia’s ability to shape the course of events in Iran is limited.

For all these reasons, Russia ought to consider whether it still benefits any longer from protecting Iran at the Security Council. Unquestionably, a Russian veto could prevent the Trump administration from extending the UN’s conventional arms embargo on Iran, set to expire in October. Russia can also cause considerable difficulty for Washington as the latter seeks a “snapback” of UN sanctions against Iran’s nuclear program. But what does Moscow have to gain from such obstruction?

For its part, the Trump administration should explore new ways to drive a wedge between Moscow and Tehran. At minimum, the White House should make clear that its pressure on Tehran will be unrelenting, so Iran has little prospect of recovering its strength.

Putin’s reflexive anti-Americanism will likely prevent him from making choices that protect Russia’s long-term interests. But whether Moscow likes it or not, the Islamic Republic is living on borrowed time and their partnership may be headed for a fundamental transformation. Russia does not have the power to reverse those trends, so what does Putin have to gain from doing so many favors for Tehran?

Alireza Nader is a Senior Fellow at the Foundation for Defense of Democracies, a nonprofit, nonpartisan research institute focusing on foreign policy and national security. Follow him on Twitter @AlirezaNader.