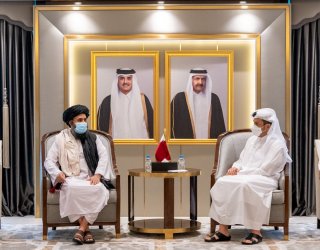 Qatar, the rich Arabian emirate which maintained a relatively cordial relationship with the Taliban during its twenty-year insurgency, described recent actions that its fighters had conducted in Afghanistan as “disappointing.”

Sheikh Mohammed bin Abdulrahman Al-Thani, the country’s Foreign Minister, chastised the group for its actions in a press conference in Doha on Thursday.

Although the Taliban promised soon after their capture of Kabul on August 15 that they would not reinstitute brutal practices introduced during the group’s initial five-year rule from 1996 to 2000, recent events in the country have raised concerns. After arresting, convicting, and executing four Afghans for kidnapping, the Taliban publicly hung their bodies from construction cranes in Herat, invoking similarities to their treatment of the last president of communist Afghanistan, Mohammad Najibullah, who was hung from a lamppost when the Taliban captured him during their 1996 takeover of Kabul. They have also closed women’s schools and refused to reopen them, although the academic year resumed for boys several weeks ago.

“The recent actions that we have seen unfortunately in Afghanistan,” Al-Thani told media outlets at the press conference. “It has been very disappointing to see some steps being taken backward.”

The foreign minister underlined that while Doha disapproved of the group’s actions, it would continue to interact with them, and warned the international community that trying to isolate the Taliban government would be counterproductive. “We need to keep engaging them,” Al-Thani said, “and urging them not to take such actions.”

“We have also been trying to demonstrate for the Taliban how Muslim countries can conduct their laws, how they can deal with [...] women’s issues,” he continued.

Al-Thani noted that in Qatar, an Islamic country, women outnumber men in the workforce and in the country’s universities, showing that women’s empowerment and Islam were not mutually exclusive.

Qatar has long links to the Taliban. Doha was chosen as a venue for negotiations between the group and the United States during the insurgency, and the Taliban established a political office in Doha in 2013, functioning as an embassy for the group prior to its takeover of Afghanistan. In 2015, Doha hosted negotiations between the United States and the Taliban that led to the release of Army Sgt. Bowe Bergdahl from Taliban captivity in exchange for five high-ranking Taliban prisoners.

Follow-up negotiations between Washington and the Taliban led to the February 2020 peace agreement, which was also negotiated and signed in Doha.

Following the Taliban takeover, most evacuation flights from the Hamid Karzai International Airport in Kabul landed in Doha, and Qatari contractors were responsible for repairing and restoring the airport for civilian air travel after the U.S. withdrawal concluded.