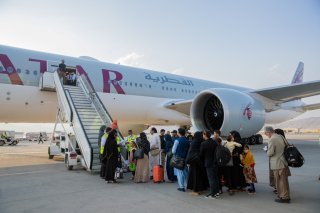 U.S. special envoy for Afghanistan Zalmay Khalilzad announced on Friday that an unspecified number of Americans, as well as other foreign nationals, landed in Qatar on an evacuation flight from Afghanistan.

Around 170 civilians were present on the flight, according to Reuters; they were escorted to the Kabul airport by a Qatari convoy and were not stopped by the Taliban.

In addition to U.S. citizens, passengers included citizens of the United Kingdom, Belgium, the Netherlands, Germany, Italy, and Croatia, in addition to Afghans. After the passengers landed in Qatar, they were transported to a compound in Doha, in preparation for being returned to their home countries.

Khalilzad stated that while the U.S. military evacuation officially ended on August 31, America had “no deadline” to remove its citizens still remaining in the country.

President Joe Biden estimated the total number of Americans remaining in the country at around 100 to 200. Of these, it has been said that around one hundred are attempting to leave. The State Department has remained in contact with them, and chartered flights have continued to remove American citizens from the country since August 31, although reports have circulated that some Taliban officials are attempting to stop them. Secretary of State Antony Blinken announced at a September 8 press conference that U.S. officials had made the urgency of the flights’ continued operation clear to the Taliban. Blinken also stated that the Taliban had been cautioned about the consequences of refusing to permit flights with Americans onboard from freely departing the country.

“Those flights need to be able to depart,” Blinken said. “And we will work every day to make sure that they’re able to do that.  We will continue to press the Taliban to allow the charters to leave, and also critically to open … the Hamid Karzai International Airport, to the regular flow of civilian aircraft, which can enable the safe and orderly departure of people from Afghanistan.”

In addition to evacuation flights, a group of four Americans was evacuated across Afghanistan’s border with Tajikistan earlier in September.

Qatar has played a key role as an intermediary between America and the Taliban since the U.S. withdrawal. Doha has maintained friendly relations with the Taliban, helping the group to repair and reopen the Hamid Karzai International Airport after it was severely damaged during the evacuation.