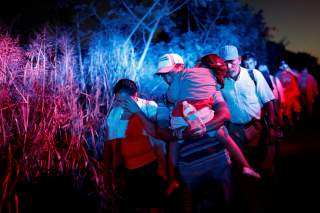 With the midterm election days away, America is grappling with what President Donald Trump is calling an immigration crisis. In response to a serpentine caravan of thousands of Central Americans heading to the United States to apply for asylum, Trump has sent active-duty troops to help secure the border with Mexico.

The president announced Wednesday that the number of servicemen sent to the border could reach fifteen thousand—more troops than the United States now has in Afghanistan. One estimate puts the cost of deploying the initial 5,200 soldiers at $50 million. A pittance in the Pentagon scheme of things, but it’s money that could do real good elsewhere. When asked about the decision, Secretary of Defense James Mattis said bluntly, “We don’t do stunts.” Perhaps, then, we should call “Operation Faithful Patriot” an exercise. What it is not is a rational response to a real threat to American national security.

These columns of indigents are not modern Visigoths. Despite the incessant coverage, evidence-free assertions, and attempts to unearth a conspiracy, even Shepard Smith told his Fox News viewers: “There is no invasion. No one’s coming to get you. There’s nothing at all to worry about.” If this caravan does finally stagger up to U.S. soil in about a month, its remaining members can be dealt with by Customs and Border Patrol personnel. They are unlikely to equal even 10 percent of the monthly illegal immigrant apprehensions at our southwest border.

So is this caravan crisis all sound and fury? No. While the immediate threat to the United States is virtually nil and legitimate refugees must be treated in accordance with international and U.S. law, we should also recognize this event for what it is: a harbinger. America, completely secure in her own hemisphere for nearly two centuries, still has neighbors. And the future does not look good for those neighbors.

Latin America is already incredibly violent. As a report this spring from the Igarape Institute detailed, seventeen of the twenty countries on Earth with the highest murder rates are Latin American, as are forty-three of the fifty most violent cities. Honduras, where this caravan originated, is one of the most violent countries on earth. Tegucigalpa has a murder rate that is twenty times the size of London’s murder rate.

Neighboring El Salvador is even worse. In 2015 it became the most violent country on earth not at war. Though homicides have fallen significantly since then El Salvador still has the highest murder rate in Central America. Nicaragua is far safer at the moment but President Daniel Ortega has unleashed paramilitaries and pro-government vigilantes on his political opponents. He will continue to rule by the gun, with predictable consequences for Nicaraguans.

The picture to both the north and south is not much better. Mexico is a stable middle-income country with a GDP over $1 trillion. It also remains mired in a brutal drug war and is on its way to the most violent year in its modern history. Cuba is isolated and ignored, but regime collapse or an epidemic could precipitate a new Cuban refugee flotilla off Florida’s shores. Like Mexico, Brazil broke its own grim murder record with 63,880 homicides in 2017. The country duly elected a far-right law and order authoritarian, Jair Bolsonaro, as president this week.

Venezuela, of course, makes Brazil look like paradise. Over two million Venezuelan refugees have left their country since 2014, as its self-imposed economic and political crisis has deepened. America is lucky that most of them are trying to get to Medellin, not Miami.

It is the long-term trajectory of Latin America that should really worry Americans. There is little reason for optimism about the future of most countries in the Western Hemisphere. While globalization and a winners-take-all economy are hollowing out America’s middle class, these dynamics are likely to have catastrophic effects on Latin America’s even more unequal societies. The ongoing Fourth Industrial Revolution will stall and reverse many of the gains poorer countries have made through comparative advantage and globalization. A great deal of manufacturing will probably return to the United States and Europe, particularly if political or environmental events cause significant disruptions to global supply chains.

American tariffs may accelerate this process, but it is technologies like artificial intelligence, 3D printing, and driverless cars that will lead to a hemorrhaging of low- and medium-skill jobs. This will happen long before Latin American countries can manage even a modest imitation of East Asia’s export-led growth.

Climate change is the second and potentially more grave disruption waiting for Latin America. While Miami may be underwater sooner than we think and the American southwest will probably become increasingly uninhabitable, the United States is a rich country. Most Latin American countries will struggle to cope with the effects of even moderate climate change scenarios.

Brazil is a good example. Many of Brazil’s major cities are on the coast and extremely vulnerable to flooding. Agricultural productivity in some areas is already falling. Brazilian climate scientists expect crop yields to suffer most in the northeast, already Brazil’s most backward region. When coupled with the country’s endemic corruption, the prospects for future stability are not good.

Climate change and the Fourth Industrial Revolution will challenge the wealthiest and most stable countries in the world. In the most unequal region on Earth, poorly governed and hyper-violent, these two disruptions may prove insurmountable. One need only look at Syria, where many scholars argue that climate change helped set the stage for civil war, to see what the future might look like in Latin America.

The United States has been almost wholly spared the impact of massive refugee flows from the Middle East—a perverse blessing, given all we did to cause that crisis. We are unlikely to avoid a similar fate in our own neighborhood. The potential threat to American prosperity, security, and political stability from a tidal wave of migrants and refugees dwarfs any damage that conventional terrorism or our own expeditionary wars could inflict. While there is no need for American troops on our border now, that day is coming.