Rejoining the Iran Deal is Easier Said Than Done 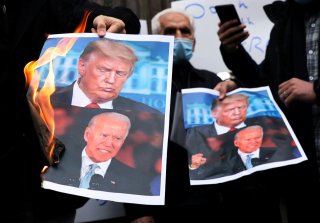 Recently, U.S. President-elect Joe Biden said that Washington will rejoin the Joint Comprehensive Plan of Action (JCPOA), popularly called the Iran nuclear deal, provided Tehran goes back to strict compliance. Iran, for its part, has also expressed its willingness to fully comply with the nuclear deal, if and when the United States lifts punitive sanctions that have been imposed on it. Here, it is important to recall that, after President Donald Trump unilaterally abandoned the JCPOA, Iran has gradually abdicated its commitments as enshrined in the deal and accelerated its nuclear activities. That both Tehran and the incoming Biden administration have hinted at resuscitating the JCPOA is indeed a beacon of hope for the future of the nuclear aspect of this acrimonious relationship. That said, reviving the JCPOA would be a tall order, given that both capitals have hardened their respective positions. Additionally, there are three reasons why returning to the JCPOA will be difficult.

The first impediment to the reinvigoration of the JCPOA would be created by the Iranian hardliners. Led by the supreme leader, Ali Khamenei, conservative elements in the Iranian polity have shown little enthusiasm over the nuclear deal. Khamenei, a man who wields power and authority in the Iranian system, has been vociferous in sharing his thoughts on the JCPOA. Linking Iran’s national interests with the abandonment of the deal, Khamenei has not shied away from indicating that Iran might walk out of the deal. Moreover, hardliners have been pushing for legislation aimed at allowing Iran to exit the JCPOA. On December 1, the Iranian Parliament passed a bill requiring the government to take three drastic, significant steps. One, resume enriching uranium to 20 percent. Two, build and keep a stockpile of 120 kilograms of enriched uranium. Three, restrict access of UN inspectors unless sanctions on Iran’s banking and oil sectors are lifted.

All this does not augur well for the JCPOA. With opposition stacked against him, President Hassan Rouhani will find it harder to negotiate with the United States. Rouhani would have to increase his asks of the Biden administration on the negotiating table if it comes to that. In the interregnum period, Iran could be expected to talk tough and increase its rhetoric against the United States. Other than sanctions relief, compensation amounting to billions would be on Iran’s demand-list.

Iran would be compelled to put forth stringent demands on the table in its parleys with the United States, given that the environment has been further vitiated after the assassination of Iran’s nuclear top scientist, Mohsen Fakhrizadeh, last month. With Iran clamoring to avenge the death of Fakhrizadeh, the chances of negotiations on the JCPOA are slim. Even if talks were to commence somehow, it would be politically inexpedient for Iran to acquiesce to U.S. conditions on getting the JCPOA back on track. If anything, the JCPOA could become the first casualty of Iran’s rancor against the United States and its ally, Israel, a country Iran says is behind Fakhrizadeh’s killing.

Iran may find it feasible to relinquish the JCPOA, given that the step would be construed as an act of defiance amidst adversity. That the costs of abandoning the JCPOA could be colossal is something that will help Iran signal to its population, as well as adversaries, that it truly took its enemies to task for killing one of its security managers. In addition to that, leaving the JCPOA would then free up Iran to raise enrichment levels, a decision that could help it display resolve while putting pressure on the United States and Israel. This in turn will strengthen the hands of Iran vis-à-vis a new administration at the helm in the United States during future negotiations.

Leaving with a Bang?

The second factor that is likely to mar the future of the JCPOA is President Trump’s muscular approach against Iran and his desire to resort to that before he leaves office. The United States continues to slap sanctions on Iran over the country’s alleged human rights violations. U.S. Secretary of State Mike Pompeo has vehemently defended the decision to impose sanctions, terming it as a step in-line with efforts to reduce the threat emanating from Iran. Also, reportedly, President Trump mulled over launching airstrikes on Iran’s nuclear facilities. In a brazen tweet, the U.S. Strategic Command justified the need for having strategic deterrence against Iran by listing down the spectrum of threats posed by that country. The list included issues like the rise of anti-American sentiments in Iran and that country’s espousal of terrorism. That Washington is communicating that it needs nuclear weapons to deter non-nuclear threats germinating from Tehran is counterproductive. Hardliners, who are even-otherwise distrustful of Washington’s intentions, will take these enunciations seriously and question the rationale for remaining bound by the constrictions of the JCPOA.

Ahead of the change of guard in the White House, sanctions and threats will not be able to create the conducive milieu needed for any kinds of substantive discussions between the two countries. If President Trump decides to ramp up coercive measures, including the possible use of force against Iran, before leaving office, it would be very difficult for the Biden administration to arrest a decay and deal with an even more hostile Iran. While widening the mistrust and credibility-gap, continued reliance on harsh measures against Iran will shrink space for meaningful dialogue. Radical factions in Iran would argue that the nuclear deal has not extricated Iran from its economic woes and unremitting foreign intimidation. Moderates will most likely lose this debate and find it onerous to resist pressure from the conservatives. Thus, every attempt to pick up the pieces on the JCPOA would be undermined by a feeling within Iran about the U.S.’ deceitful attitude and conduct. For Biden to reset an inveterately spiteful relationship, it is imperative that confidence-building measures be introduced in a bid to lower temperatures. However, President Trump’s insistence on teaching Tehran a lesson will plant more minefields that will be harder to navigate. In such a situation, the JCPOA may no longer remain a low-hanging fruit between Tehran and Washington.

Tied to the first two issues is how Joe Biden views Iran. Though he is in favor of giving JCPOA a fresh lease of life, he is fully cognizant of the non-nuclear challenges that the Islamic Republic presents. In a recent interview, Biden warned Iran to end its malign regional activities. He said unless there is a clear pathway for negotiations on Tehran’s support to proxy groups and on its missile program, the U.S. will not rejoin the JCPOA. By linking the future of the JCPOA to Iran’s regional behavior, Biden has, by and large, vindicated his predecessor’s decision to punish Iran for its subversive activities by leaving the nuclear deal. He has also signaled Iran that other features of the U.S.-Iran rivalry will have a direct bearing on the trajectory that JCPOA will follow going forward. With Iran having categorically rejected negotiations on its missile program, the future of the JCPOA does not look promising, to say the least. Thus, it is reasonable to argue that even Biden is likely to leave the JCPOA at the mercy of factors that have got little to do with it. Also, with Trump’s Middle East Peace Plan gaining traction, Iran, by virtue of being a common enemy of all parties involved in the recalibration of the region, is likely to fear encirclement. Therefore, Iran will cling onto its sources of influence, rather than loosen its grip on them. Thus, in such a fraught landscape, Iran’s recalcitrance over its use of proxies and its ballistic missile program will be a veritable stumbling block in rejuvenating the JCPOA.

Despite varying degrees of interest in putting the JCPOA back on track, both Iran and the United States are must find common ground while navigating a plethora of irritants along the way. Thus, the JCPOA is fast-losing its status as a little window of opportunity that could bring about a thaw in Washington’s deteriorating ties with Tehran.