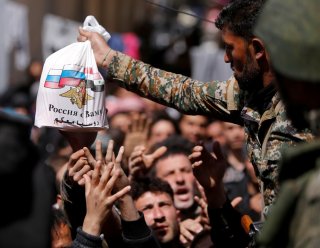 In a miraculous about-face, the United Nations Security Council (UNSC) managed to renew cross-border aid for millions of Syrians on July 9, one day before it was set to expire. This came as a surprise to many observers given Russia’s refusal to participate in the debate in the days leading up to the vote. Ultimately, the reauthorization of cross-border aid via Resolution 2585 (UNSCR 2585) will have a significant impact on not only humanitarian conditions in northwest Syria (NWS), but also regional geopolitics moving forward. Thus, understanding UNSCR 2585, the politics behind the deal, and its implications for Syria are crucial.

The renewal vote concluded a long series of debates by global powers on the Security Council. Russia has for years signaled its disdain for the cross-border aid mechanism outlined originally in 2014 in UNSCR 2165 and subsequently in USNCR 2533 in 2020. The Russian delegation to the United Nations did not participate in the negotiations leading up to the deal—a signal that left many observers expecting a veto, essentially promised by Moscow for a year.

Instead, following meetings by each country’s ambassadors to the United Nations, the UNSC voted unanimously to renew the cross-border aid mechanism at the Syrian-Turkish border crossing of Bab al-Hawa on July 9 for six months under UNSCR 2585. Importantly, the crossing will be open for an additional six months upon the Secretary General’s release of a “substantive report” outlining the “transparency” of the operations and progress on “cross-line access,” meaning the development of an aid delivery mechanism within Syria that crosses conflict lines, for humanitarian operations.

The language regarding the latter six months is vague, and both sides of the debate have highlighted competing narratives about the true length of the extension. Realistically, Moscow could attempt to veto it again in six months, although this is not guaranteed and could fall outside of the resolution language—producing a serious debate in the future. Regardless, the renewal ensures the continuation of the UN-led humanitarian aid operation from Turkey, robbing Syrian President Bashar al-Assad a victory on the humanitarian front that would have allowed him to divert aid through Damascus—already proven as an ineffective and unrealistic mechanism that will only harm humanitarian access for millions of Syrians in opposition-held lands.

Even with this limited victory, the United States and its allies could not secure the expansion of UNSCR 2533 into northeast Syria (NES) at the al Yarubiyah crossing along the Syria-Iraq border. This would have provided essential aid to Syrians and Kurds living under the Autonomous Administration of Northeast Syria (AANES) and the Syrian Democratic Forces (SDF). Washington has been vocal in its support for expansion, offering a rather maximalist position on the issue relative to a simple renewal of the Bab al-Hawa crossing. Ultimately, the UNSC vote is a win for NWS but another major loss for NES, as many humanitarian organizations have expressed.

The conclusion to be made is that both Russia and the United States ceded ground on areas of national interest—namely, Moscow’s stance against reauthorization and Washington’s stance on expansion. Vladimir Putin probably understands that increased aid to Syria still benefits his client’s stability, especially given the terrible condition of Syria’s economy. This understanding is likely coupled with the fact that Russia holds a powerful bargaining chip in humanitarian access—something it can and is using to receive concessions on the Syria file. While not explicitly stated, the Russians may have preferred renewal for now in exchange for deeper concessions—such as sanctions relief in Syria in support of reconstruction efforts—in the future.

Another major line of reasoning lies with Turkey, as Moscow likely wanted to avoid any serious escalation of tensions with Syria’s northern neighbor. Surely Ankara would not be fond of a Russian veto causing another mass-displacement incident, should millions in Syria’s north be unable to access resources and face a potential Assad offensive against his newly weakened opponents. The Biden administration probably recognized this as a point of leverage when engaging Russia and corresponding with Turkish officials last month. Recent dialogue between Turkish and Russian officials certainly supports this notion. To be sure, other considerations are likely to have played a role, stemming in no small part from the conversations between the heads of state and their top diplomats.

Ultimately, the international politics of the matter will probably not deeply impact regional geopolitics in the near term. Although many Gulf states have re-aligned their positions on Syria in recent years and have begun re-normalizing relations with Assad, the continuation of multiple major U.S. sanctions regimes complicate any deeper realignment. Specifically, Caesar Act sanctions, which focus on the Syrian military, the domestic petroleum and gas industry, and sectors related to reconstruction in government-held areas (i.e. construction, industry, etc.), play a major role here.

That said, the combination of sanctions, as well as the slightest hint of uncertainty regarding a full twelve-month reauthorization of cross-border aid, will likely harm humanitarian efforts moving forward. Although Caesar purportedly implements “targeted sanctions” on the regime and corrupt officials, in reality, such sanctions are widespread. This has severely hobbled the Syrian economy and limits an already risk-averse international banking and humanitarian system from engaging in Syria effectively.

The sanctions applied to the Central Bank of Syria highlight how “targeted” as a term cannot apply to an entire monetary system, nor the sweeping inflation that has resulted. To be sure, Lebanon’s economic crisis and the conflict have contributed, but to dismiss the role of sanctions is to miss the point. Until Washington decides to conduct real engagement on the issue, sanctions only harm the average Syrian while regime cronies deepen illicit networks of enrichment as a workaround. Worse, the sanctions use poverty as a weapon of negotiation and war.

For these reasons, Syria will continue to be one of the worst humanitarian access issues in the world for the foreseeable future. The renewal of one border crossing, while an achievement, only minimally addresses the sweeping humanitarian needs across a country facing a 90 percent poverty rate. The international and regional politics of the matter will continue to outweigh the basic interests and needs of a Syrian people in desperate need of a break, for which the world may someday recognize and act upon accordingly. Until then, the status quo remains.