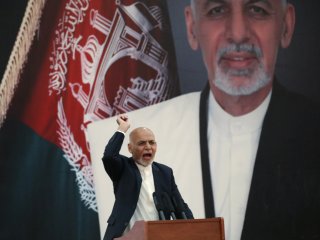 Ashraf Ghani, the president of the “Islamic Republic of Afghanistan” until its destruction at the hands of the Taliban, explained the reasons for his escape from Kabul and outlined the chaos that had preceded his decision during his first interview after the fall of Kabul.

Ghani told the UK’s former chief of the defence staff, Gen. Sir Nick Carter, who was guest-editing the Today program, that he had initially planned to flee to the southwestern city of Khost but learned that it had fallen during the insurgent group’s rapid offensive. He also abandoned a secondary plan to flee to nearby Jalalabad after that city fell too. Ghani noted that he did not realize he was permanently leaving the country until he was already airborne and emphasized that the decision to flee was the “hardest” he had made during his seven years in the country’s highest office. He claimed that if he had remained behind at the presidential palace, then his guards would have been killed attempting to defend him.

“They were not capable of defending me,” the former president said, noting that two separate Taliban factions were approaching the palace from different directions and violence from government troops could have sparked a conflict between them.

“The possibility of a massive conflict between them that would destroy the city of five million and bring havoc to the people was enormous,” he noted.

Ghani indicated that he had two minutes to decide whether or not to leave. He did not share his decision with the palace staff.Several presidential staffers later reported returning from their lunch breaks and wondering where he had gone.

Ghani has been strongly criticized by some Afghans and outside observers for his abrupt departure. Although the Taliban takeover did not result in large-scale reprisals against former officials, the country appears to be headed toward a famine, which critics allege could have been avoided if an orderly transition of power had been arranged from Ghani to Taliban leaders. Also, rumors have circulated that he had stolen $170 million from the country’s treasury on his way out, which Ghani strongly denied.

“My life’s work has been destroyed,” he said. “My values have been trampled on. And I have been made a scapegoat.”

After fleeing the palace, Ghani’s helicopter landed in Uzbekistan. The former president then boarded a flight to the United Arab Emirates, which is where he remains.