The Rift Between Turkey and America Was Already There 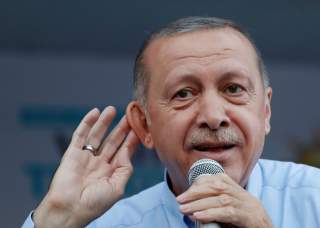 It’s not every day when one NATO member state sanctions the government of another over a disagreement, but this is exactly what the United States did to Turkey last week. On Wednesday, August 1, the Trump administration announced that Turkey’s justice and interior ministers would be cut off from U.S. banks and banned from conducting business with Americans over the issue of Andrew Brunson, a pastor who was arrested in October 2016 and charged with conspiring against the Erdogan government. “Pastor Brunson’s unjust detention and continued prosecution by Turkish officials,” said Treasury Secretary Steven Mnuchin in a press statement, “is simply unacceptable.”

The United States and Turkey have traditionally had a collegial strategic defense relationship. The Turks were inducted into the NATO alliance in 1952 during the first wave of accession in part because Washington viewed Ankara as an anti-Communist bulwark in a critical stretch of territory connecting Europe with Asia. The relationship has seen its share of disputes and flare-ups, from numerous Turkish military coups during the Cold War to Ankara’s refusal to allow U.S. troops to use its territory on the eve of the 2003 invasion of Iraq. But despite the occasional divergences, there was an elementary understanding that it served everyone’s interests for American and Turkish officials to have solid working ties.

The differences today are far acuter. Apart from Brunson’s arrest and trial and President Recep Tayyip Erdogan’s consolidation of power after the 2016 coup attempt against him, U.S.-Turkey relations have seen setback after setback ever since Syria’s anti-regime demonstrations deteriorated into civil war.

For Erdogan, the Americans (first under Barack Obama and now under Donald Trump) are patronizing bullies who expect Turkey to tow the line and follow orders. Anti-Americanism has been ripe in Turkish politics in part because Erdogan has fanned it and used the ensuing hyper-nationalism to his political advantage. Ankara views the United States as exhibiting extremely poor judgment in Syria, both during the early years of the war when Erdogan was pushing for a U.S.-imposed no-fly zone for anti-Assad rebels to later on in the conflict, when Washington began partnering, arming, and providing air support to the very Syrian Kurdish fighters the Turks label as terrorists.

And then there is Fethullah Gulen, the exiled cleric based in Pennsylvania whom Erdogan blames as the orchestrator of the attempted coup. Erdogan has asked for Gulen’s extradition, a request Washington has denied every time.

The way Washington sees things, the Turks are not acting like a NATO ally. Instead of combating terrorism, the Turkish authorities looked the other way as European jihadists landed in Turkish airports and crossed the Turkish-Syrian border on their way to join the Islamic State or Al-Qaeda. Rather than bombing ISIS, the Turkish military chose to slow down the counter-ISIS campaign by bombing Syrian Kurdish fighters in the north. There was a time not so long ago when Turkish officials were threatening to clear Kurdish militants from the Syrian city of Manbij, even if it resulted in a shooting war with U.S. special operations troops in the area.

Fortunately, cooler heads prevailed when Secretary of State Mike Pompeo and Turkish Foreign Minister Mevlut Cavusoglu reached an agreement to replace Kurdish troops and civil servants with the Arabs who actually lived there. But it took months of back-and-forth and a lot of fiery rhetoric to get there.

The U.S. Congress has long lost patience with the way Erdogan is conducting himself. In addition to this week’s sanctions over Brunson’s detention, Congress passed the annual defense policy bill which included a provision preventing the transfer of F-35 aircraft to Turkey until a full assessment of the U.S.-Turkey defense relationship is made. The Turks, in typical fashion, are furious.

These interactions don't mimic those of two NATO allies committed to one another's defense during a time of attack. Far from it; they represent the culmination of a relationship that is being eroded by two vastly different sets of national interests. America wants an eradication of ISIS; the Turks want eradication of the fighters who are taking the fight to ISIS on the battlefield. Washington wants Turkey to release Americans from its custody; Ankara wants the Americans to stop shielding a man whom it regards as a traitor. The Pentagon is pushing for Erdogan to cancel his acquisition of the S-400 Russian air defense system; Erdogan and his ministers, meanwhile, expect to be given the F-35 aircraft they already paid for. The United States demands all importers of Iranian crude oil to stop their purchases by November, and the resource-hungry Turkish government dismisses them as an illegal ultimatum contrary to U.N. Security Council resolutions. If there are any similarities between the two countries, it's the realization that relations are moving in an acrimonious direction.

Right now, Turkey remains a NATO member state with all of the privileges membership provides. But Ankara’s actions, both its crackdown of democratic governance and its foreign policy, is pulling it further away from the transatlantic community. It’s not at all clear what NATO can do about it, and one can imagine Tayyip Erdogan grinning ear-to-ear about it.