Russia and Turkey Will Collide Over End of Syrian Civil War 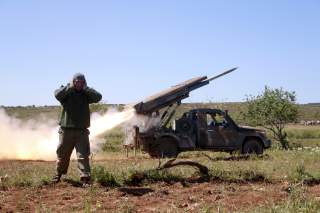 At the beginning of August, the Syrian military planes flew over the northwestern province of Idlib and dropped leaflets urging residents to surrender and threatening military action. It was the latest example of how Bashar al-Assad and his forces have ignored de-escalation agreements and continue a full-scale offensive against their opposition. The city of Idlib—the only major opposition-held territory left in Syria and also the last de-escalation zone remaining—is the next target for the Syrian regime’s advance.

The looming conflict has significant implications for Russia, Turkey, and the future of the Syrian war. Since late 2015, Russia and Turkey have pursued their respective military strategies in Syria with a mutual understanding. Despite the Turkish downing of a Russian Su-24 warplane and the subsequent assassination of the Russian Ambassador to Turkey, the partnership has persisted, surprising many observers. Furthermore, both Russia and Turkey have carved out respective pockets of influence that have helped them secure their core objectives in Syria. On a long enough timescale, however, even the best of partnerships have their limits.

For Turkey, the security of Idlib is non-negotiable. The Turkish military deployed to the province last year, and it remains a crucial political leverage point for President Erdogan. Without security guarantees in Idlib, Turkey will either escalate their military involvement or cease their participation in shaping the future of Syria's governance. This presents Russia with a difficult choice—respect Turkish interests in Syria or estrange Ankara as a partner in the Astana talks.

An Unlikely Partnership: Russia and Turkey

The Russian-Turkish relationship has been one of convenience. President Vladimir Putin, to his credit, has been successful in leveraging Turkish security concerns into territorial victories for the Syrian regime. In return, Turkey has received support against Kurdish forces in northwest Syria, largely diverting their attention from supporting the Syrian opposition against Assad. As a result, each country has recognized their limits and has achieved progress in numerous areas of cooperation, most significantly through the Syrian peace process in Astana.

Since May 2017, the Astana talks—dominated by the Russians, Turks, and Iranians—formalized the introduction of four de-escalation zones in Syria. These zones included all significant areas remaining under control of the armed Sunni opposition and focused on the implementation and enforcement of ceasefire agreements in rebel-held territories around Daraa, Homs, Eastern Ghouta and Idlib.

Paradoxically, the process resulted in the complete regime takeover of three of the aforementioned ceasefire zones. After a regime offensive concluded in April 2018, rebel forces in Eastern Ghouta either surrendered or agreed to transfer to Idlib province. Similarly, rebel forces in Homs surrendered in May. Finally, a third regime offensive directed against opposition forces in Southern Syria just recently concluded.

Today, Idlib exists as the last major bastion for the Syrian opposition. Unlike other regions recently taken by regime forces, the city intertwines conflicting interests for all major powers involved, raising the stakes considerably higher.

Beginning in October 2017, the Turkish military established observation points along the line of contact between regime and opposition forces as a means to enforce the de-escalation agreement. This commitment, both significant and risky, underscores Ankara’s priority in maintaining a degree of order in the governate. In part, Turkey’s commitment to Idlib rises from the threat of an extinguished Sunni opposition. Any major regime operation, if unchallenged, would achieve such results—with the alternative being a protracted Sunni insurgency along Turkey’s southern border. Neither outcome is one that Turkey desires.

Finally, to make matters even more complicated, Idlib has become one of the highest density areas of internally displaced persons (IDPs) and refugees in the world. It is estimated that half of the territory’s two million residents have been displaced over the last eight years, and hundreds of thousands of new IDPs have already arrived in the governorate in the last year.

So how do these factors affect the future of the Turkish and Russian relationship? There are already mounting indications that regime forces may launch an offensive military operation against Idlib in the coming weeks. Emboldened by recent victories in Ghouta and the Southern Front, Assad may be willing to risk provoking Turkey especially if he perceives Russian acquiescence. The presence of al-Qaeda affiliated group Hayat Tahir al-Sham, which controls significant territory in the governorate, will further complicate facts on the ground if violence were to erupt.

Turkey has demonstrated a willingness to use military force in Syria to secure its perceived interests. Both Operation Euphrates Shield and Operation Olive Branch were focused on responding to developments principally related to Ankara’s perceived security threat from Kurdish forces on its southern border. Erdogan himself has expressed concern of a regime offensive in Idlib on no shortage of occasions, and purportedly linked the fate of the governorate to that of the Astana talk process in July 2018. It is within reason to suspect that when provoked, in an area of high priority, Turkey will respond with force.

Will Russia Keep Assad on a Short Leash?

Fortunately, for now, it seems Russia recognizes the severity of the situation. In July, Russia's chief Syria negotiator Alexander Lavrentyev publicly stated, “Any large-scale operation in Idlib is out of the question.” However, in recent days, Russia has accused the United States of preparing for an attack on the Syrian Army and the Syrian opposition of planning a chemical weapons attack. In response, Moscow has preemptively deployed up to thirteen Russian ships from the Black Sea Fleet through the Bosporus into the Mediterranean.

In the event of a conflict in Idlib, what role will Russia assume? Russia's past policies—including tacit support of Turkey's Operation Olive Branch in Afrin, as demonstrated by the withdrawal of Russian military police from the region in January 2018—indicate that Moscow may appease Turkish interests given the costly alternatives. But close observers are equally familiar with Moscow’s unrelenting willingness to support Assad’s abhorrent regime to great lengths.

Moscow and the Assad regime should also not discard Turkey’s commitment to Syria’s future—after all, it was President Erdogan that first called for Bashar al-Assad to step down in 2011. Moscow should advise Ankara to tread carefully and reserve the option to distance itself from the possibility of a miscalculated assault by regime forces.

A Call for U.S.-Turkish Rapprochement

Almost exactly seven years after President Obama formally called on Assad to step down, the United States is all but sidelined in the events happening on the ground and discussions shaping the political future in Syria. While U.S. National Security Advisor John Bolton warned his Russian counterpart, Nikolai Patrushev, against the use of chemical or biological weapons, the discussions in Geneva did not include an understanding about the lasting security of Idlib.

As the last three years have shown, the United States is not well-positioned to cooperate with Russia in Syria; however, it could still regain a partner in Turkey. Recent clashes between the Trump administration and President Erdogan over the detention of American pastor Andrew Brunson, the imposition of sanctions on Turkey’s economy through escalating U.S. tariffs on steel and aluminum has weakened the U.S. relationship. But Syria remains a priority for both countries—and if Washington wishes to salvage any remaining leverage on the peace process, it would be wise to reconsider its recent row with Turkey.

In coming weeks, the security of Idlib will define the state of affairs in Syria. A major escalation would significantly add to the ongoing human toll of the eight-year war, and it would prove devastating to the remnants of the Syrian opposition. If Ankara deems that the fight for Idlib is too costly and concedes its political interests, it will ultimately forfeit its functioning role—and leave Washington without an ally—in the Syrian peace process. Thus, it is imperative that Washington support its Turkish ally and actively work to repair its relationship with Ankara to retain whatever leverage remains on the ground.

If the U.S. ally and NATO member departs from defending the final pockets of resistance in Syria—Assad, Russia, and Iran will remain the last ones standing.

Gabriel White is a master in public policy candidate at the American University School of International Service. Bogdan Belei is a research assistant at the Harvard Belfer Center for Science and International Affairs.