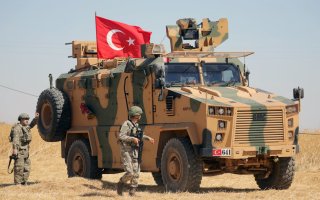 “We hope that Ankara will refrain from actions that could lead to a dangerous deterioration of the already difficult situation in Syria,” Zakharova said. “Such a move, in the absence of the agreement of the legitimate government of the Syrian Arab Republic”—referring to the Damascus-based government of Syrian president Bashar al-Assad—“would be a direct violation of Syria’s sovereignty and territorial integrity.”

Ankara’s expedition would “cause a further escalation of tensions in Syria,” she added.

Erdogan announced preparations for an operation in northern Syria in an address to the Turkish parliament on Wednesday, claiming that the objective was to establish a thirty-kilometer “safe zone” in Syria along the Turkish border. He added that Turkish forces would “clean up” Tal Rifaat and Manbij, two northern cities currently occupied by the People’s Protection Units, or YPG, a Kurdish militia widely credited as playing the central role in containing the expansion of the Islamic State (ISIS) in Syria from 2014 until 2018.

Although the YPG received substantial assistance from the West during the war against ISIS, Turkey has long considered it a terrorist group due to its connections to the Kurdistan Workers’ Party, or PKK, a left-wing Kurdish political party that has waged an insurgency in Turkey’s predominantly-Kurdish southeast.

Once the two cities were subdued, Erdogan claimed that Turkish forces would proceed “step by step into other regions,” although he did not provide any other details.

Zakharova argued in her remarks that while the Kremlin understands Turkey’s objections to the Kurdish militia’s presence in northern Syria, the proper solution was to deploy Assad’s troops to the north rather than violate Syrian sovereignty by expanding a foreign occupation.

Although Turkey and Russia opposed one another in Syria for much of the country’s civil war—in which Russia supported Assad and Turkey supported anti-Assad rebels in the northwest—the two countries have cooperated since 2019, ensuring that Kurdish militia units remain away from the Turkish border and conducting joint patrols.

The United States has also objected to the proposed Turkish operation, with Secretary of State Antony Blinken claiming that “any new offensive would undermine regional stability [and] provide malign actors with opportunities to exploit instability”—referring to ISIS, which has gone underground and maintained a low-level insurgency against Kurdish forces since 2018.