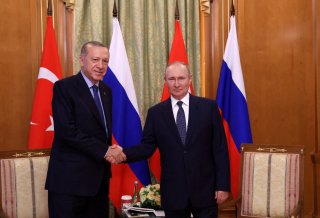 Turkish president Recep Tayyip Erdogan is traveling to Russia today to visit Sochi, a Russian resort city on the Black Sea best known in the West for hosting the 2014 Winter Olympics, for a short bilateral meeting with Russian leader Vladimir Putin.

The two leaders’ encounter comes shortly after a Turkish-mediated agreement providing for the export of Ukrainian grain ships went into effect, allowing the first such vessel to travel from Odessa to Istanbul and on to Lebanon. It also comes less than a month after Erdogan and Putin joined Iranian president Ebrahim Raisi for a three-way summit meeting in Tehran. The trip to Sochi marks Erdogan’s eighth visit to the Russian Federation since 2019.

The Turkish president’s office indicated in a press statement that the two leaders would discuss bilateral ties, as well as developments of mutual interest in the broader Eurasian region. However, the main topic of discussion is likely to be Turkey’s upcoming military intervention in Syria, which Erdogan has vowed to launch in order to degrade the strength of the anti-government Workers’ Party of Kurdistan or PKK. Although PKK-affiliated forces are present in northern Syria and some have used the territory as a base to conduct raids into Turkey, Putin and Raisi have each opposed Erdogan’s plans, warning that a Turkish incursion into Syria could destabilize the country, strengthen Islamist militants in the north, and undermine the government of Syrian leader Bashar al-Assad.

During the Tehran meeting, Erdogan vowed that Ankara would “eradicate the evil groups that target our national security from Syria,” but did not immediately take action following the voicing of Raisi and Putin’s concerns. Turkey has not specified what actions it would take against the PKK and PKK-allied groups, but it is thought that it will target the cities of Tal Rifaat and Manbij in northern Syria, both of which are controlled by the largely-Kurdish People’s Protection Units, or YPG. The relationship between the PKK and the YPG is a matter of contentious debate; Turkey has insisted that they are different branches of the same organization, while the United States and the European Union regard the PKK as a terrorist organization but the YPG as a legitimate non-state actor.

Erdogan and Putin are also expected to discuss economic issues, including Turkey’s high rate of inflation, which approached 80 percent per year in July. Energy experts have observed that Russia could help to stabilize Ankara’s economy by providing cheaper natural gas or engaging in other forms of economic cooperation, such as a currency swap. The Kremlin also claimed that the two leaders would discuss “technical and military cooperation”—a likely euphemism for Russian purchases of Turkish drones, although Baykar, the manufacturer of the well-known Bayraktar drone, has explicitly claimed that it will never sell to the Kremlin over its moral objections to the Russian invasion of Ukraine.