Senate Hawks Claim We Were Never at War With Iran 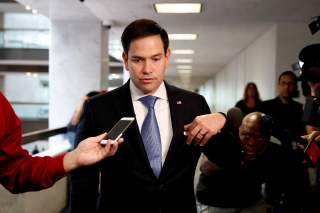 A bipartisan group of senators voted 55–45 to end “hostilities” with Iran on Thursday afternoon, but some Senate Republicans claimed that there never was a war to begin with.

Iran and the United States came to the brink of war in January after two weeks of violence killed dozens of Iraqi militiamen and wounded hundreds of U.S. soldiers. Democrats and some Republicans insisted on blocking any further military action without congressional approval, and both chambers of Congress passed a resolution to restrict the president under the War Powers Act for the second time ever in history. But a few Republicans insisted that the conflict with Iran did not rise to the level of war—and so there was no need to vote on war powers.

“There is no war with Iran. An airstrike is not a war,” Sen. Jim Inhofe (R–Okla.) said, referring to the missile strike that killed Iran’s Maj. Gen. Qassim Suleimani. “We're now in the best negotiating position with Iran since 1979.”

“There is no clear line of delineation between actual war and the use of kinetic force,” Risch added. “There are things on this earth where we know it when we see it, but we can't define it.”

The Senate resolution orders the president “to terminate the use of United States Armed Forces for hostilities against the Islamic Republic of Iran” without a formal declaration of war or other authorization from Congress.

Sen. Marco Rubio (R–Fla.) proposed an amendment insisting that there are no “hostilities” with Iran to begin with. His proposal was voted down 54–46. The Democratic-controlled House of Representatives had passed a resolution on January 10 to restrict the president from going to war with Iran without further approval from Congress. But the Senate did not take up the similar resolution proposed by Sen. Tim Kaine (D–Va.) until this week.

“War is the most solemn responsibility we have, and it cannot be outsourced to anyone,” Kaine said. “Even under the best of circumstances, even when we win, there are horrible consequences.”

The resolution passed the Senate with unanimous Democratic support—as well as eight  Republican votes. Risch said on the Senate floor that Trump is likely to veto the resolution.

“If there’s one thing that we don’t need right now, it’s anything else that would give more authority to the military-industrial complex to start and finish wars without authorization from Congress,” Sen. Mike Lee (R–Utah) said. “We don’t want any more wars without the people’s elected representatives!”

But several other Republicans attempted to water down the resolution with amendments. Sen. Tom Cotton (R–Ark.) asked to carve out an exception for the Islamic Revolutionary Guards Corps of Iran, while Sen. Dan Sullivan (R–Alaska) proposed his own amendment insisting on the United States’s right to self-defense.

The original text of the resolution states that it will not “prevent the United States from defending itself from imminent attack,” and Lee claimed that Sullivan’s amendment would add “ambiguity” to the resolution. The Senate rejected both the Sullivan and Cotton amendments.

The latest round of conflict between America and Iran began on December 27, when a rocket killed an American translator at K1 Airbase in Iraq. U.S. forces blamed an Iranian-backed militia called Kata’ib Hezbollah and killed 25 of its members in “precision defensive strikes.” Kata’ib Hezbollah responded by ransacking the U.S. embassy in Baghdad.

Iraqi authorities have cast doubt on whether Kata’ib Hezbollah actually carried out the K1 attack.

Both sides have refrained from further direct escalation, although unknown attackers have fired missiles on U.S. bases in Iraq several times since.

“The president's decision to kill Suleimani has made war much less likely,” Inhofe insisted during Thursday’s debate. “It has showed Iran that its terrorism comes at a price.”

Another rocket struck K1 Airbase the same day. No one was injured or killed this time.