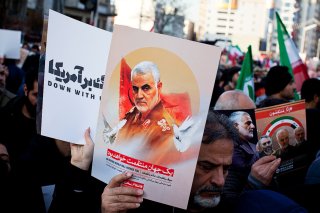 Three years after the death of Qasem Soleimani, the notorious commander of the Islamic Revolutionary Guards-Quds Force (IRGC-QF), the Islamic Republic continues to invoke his “martyrdom” for its malign and self-serving purposes. Six months after ongoing plots against U.S. officials became public, President Ebrahim Raisi reiterated the call on January 3, 2023, for vengeance on the anniversary of his death. The broader veneration of the departed general includes an array of titles: as “the commander of hearts,” “incorruptible,” and “national hero” who “fought and destroyed the Islamic State in Iraq and Syria (ISIS)”—all designed to reinforce the regime while playing fast and loose with the truth.

The facts speak of an entirely different man. Soleimani didn’t fight ISIS so much as he presented his Shiite militias as saviors of both Iraq and Iran. In truth, the violence he unleashed helped create the terror group. Nor is he a hero. Indeed, many in the country view him as a tool of the repressive state and even despise him for his participation in crackdowns against protesters over many years. Soleimani was not incorruptible either, but rather a corrupt military figure who oversaw a mafia network and wasted national resources either for personal gain or for benefit of a kleptocratic regime.

Soleimani’s role in the emergence of ISIS is part of the tangled story of his mission in Iraq, which took off with the U.S. invasion in 2003. When U.S.-led coalition forces occupied Iraq, the Islamic Republic moved swiftly to create several Shiite insurgent groups in the country to force Americans out in hopes of adding Baghdad to its regional “Shiite empire.”

Soleimani was put in charge of overseeing the mission. As a secondary effort, Soleimani took special vengeance on Iraqi Sunnis, particularly former political and military figures of Saddam Hussein’s regime, as a reprisal for the Sunnis’ participation in the eight-year Iran-Iraq War. The anti-Sunni death squads, which Soleimani created, killed and kidnapped hundreds of former senior Sunni political and military officials, among them 182 Iraqi pilots.

The Shiite militia under his command also waged a bloody war against ordinary Sunni citizens, tortured, kidnapped, and killed them, burned their homes, and, in an early version of ethnic cleansing, stopped many of them from returning to their towns. Each month, hundreds of Iraqi Sunnis were executed or tortured to death by Soleimani agents.

Soleimani’s extreme brutality against Sunnis resulted in sectarian mayhem, provoking large protests in Sunni towns where the populations harbored sharp grievances against the Shiites. It was in these extreme circumstances that Al Qaeda in Iraq (AQI), the predecessor of ISIS, emerged and turned the sectarian strife into a virtual civil war. US forces managed to destroy AQI, but the mistreatment of Sunnis did not end. ISIS rose from AQI’s ashes with Abu Bakr al-Baghdadi as its leader. It eventually took the US-led coalition 13,331 strikes to defeat the group in Iraq in a campaign called “Operation Inherent Resolve.”

If the making of ISIS in Iraq was the by-product of Soleimani’s stirring the sectarian pot, creating the terror group in Syria was by design. When in 2011, the Bashar al-Assad regime used considerable violence against peaceful Syrian protesters, Assad’s tactic backfired and triggered an armed rebellion, which turned into a civil war. This was an unfortunate outcome for Iranians, who regarded Syria as the “Golden Ring” of the “Axis of Resistance.”

With so much at stake, the IRGC-QF increased its presence in Syria to save the Assad regime. However, the extensive use of violence by Assad’s forces, Hezbollah fighters, and Soleimani’s forces resulted in international outrage, causing Western countries to push for regime change in Syria. Soleimani, concerned about the “Golden Ring” and the danger it faced, proposed to create the so-called “binary option” approach, a strategy to fight Assad’s bad international publicity. The strategy entailed creating a radical jihadist group that would make the Syrian dictator look like a lesser evil in the eyes of his people and the West.

On the advice of Soleimani, the Assad regime promptly released hundreds of prominent radical Islamist prisoners, including Amr ‘Abu Atheer’ al-Absi, Ali Musa al-Shawakh, aka Abu Luqman, Abdelhamid Abaaoud, Zahran Alloush, Hassan Abboud and his brother Abu Shadi, and Ahmed Abu Issa housed in Sednaya prison. Many of these jihadists went on to lead the Islamic State in the Syrian Civil War.

During the war, even when ISIS forces occupied northern Syria and proclaimed Raqqa to be the capital of its caliphate, the Assad regime, Soleimani’s forces, and Russian troops refrained from attacking them. Although Soleimani created a narrative of fighting ISIS, his forces and the Russian air force targeted mostly non-ISIS groups. A report by the U.S. State Department demonstrated that most Russian aerial bombing and IRGC ground attacks in Syria targeted moderate anti-Assad forces, not ISIS. As in Iraq, the terror group in Syria was eventually defeated by the U.S.-led coalition, not by Soleimani’s proxy forces, Russia, or the Assad regime.

The regime’s claim that the nation considered Soleimani a “hero” and “the commander of hearts” (Sardar-e Delha) should, similarly, not be taken at face value. In fact, Soleimani’s name is linked to “criminal activities” and the “murder” of Iranian protesters. For instance, in Kurdistan, Soleimani is known for his cruelty in massacring Kurds during the early years of the Islamic Revolution. When in 1979, the Kurdish rebellion erupted against the new regime, and Ayatollah Khomeini declared a jihad to crush unrest in Kurdistan, Soleimani was one of the commanders of the IRGC that participated in murderous campaigns against Kurds. More than 10,000 Kurds were killed (including 1,200 political prisoners, among them children as young as thirteen) during the clashes, which lasted until 1983.

Many—perhaps most—Iranians also despise Soleimani because of his opposition to reform and political openness in Iran. He participated in the IRGC’s brutal campaign against democracy-seeking movements and played a significant role in crackdowns on Iran protesters in 1999, 2009, 2017, and 2019, which he called “sedition.” General Mohammad-Ali Jafari, the former commander of IRGC, disclosed that “Soleimani was present at Tharallah Division [of the IRGC] and on the streets to fight the anti-revolutionaries and took measures to control the unrest.” This shouldn’t be a surprise because protesters chanted against Soleimani’s foreign adventurism.

During the 1999 demonstrations, several students were killed by the IRGC forces, hundreds were injured, dozens of students disappeared, and more than a thousand were arrested. In 2009, the IRGC and its Basij militia force killed over 200 protesters (unofficial reports indicate 700 protesters), 830 people got spinal cord injuries, and thousands were imprisoned, tortured, raped, and disappeared. In 2019, the IRGC forces killed 1,500 protesters, including seventeen teenagers and 400 women, during two weeks of unrest. Suppressing all of these social unrests was directed from the fearsome Tharallah Division, where Soleimani oversaw the brutal operations.

Moreover, Soleimani was among the twenty-four IRGC commanders who, in 1999, wrote an open letter to President Khatami and threatened him with action if he continued with his political reform, which in their view, threatened the “stability and peace in the country.”

Soleimani’s sobriquet, the “incorruptible,” was as much of a fabrication as the rest of his public persona. Soleimani was involved in massive financial corruption cases, such as the $3 billion embezzlement case of Yas Holding, and he used public resources for his benefit by using his political and military influences. Soleimani oversaw a mafia network comprised of embezzlers, smugglers, and money launderers and plundered billions of dollars of national resources. Soleimani’s wife was also involved in twelve cases of financial corruption and transferred the ownership of several companies. Tehran City Council had notified the judiciary to investigate the corruption case, but the judiciary closed the case out of fear of reprisal from Soleimani.

The Iranian regime’s effort to sustain and mobilize the myth of Qassem Soleimani, as seen last week in renewed calls for vengeance, is a transparent attempt to manipulate the Iranian population. It’s but the latest instance in a long history of the Islamic Republic crafting narratives, often seizing on Shia valorization of martyrdom, which have been so harmful to Iran and its long-suffering people. The myth of Soleimani, like so many myths, combines useful embellishment and cynical fabrication toward a purpose—here the perpetuation of the theocratic kleptocracy of the Islamic Republic. But Iran is changing. Today, regime-driven narratives about who should be venerated are being replaced by stories of young men and women on the streets of Iran, of no renown at all, who are putting their lives on the line to protest the regime’s repression. Theirs is a story of true heroism.

Farhad Rezaei is a senior research fellow at Philos Project.