To Support Iranians, Abandon the JCPOA 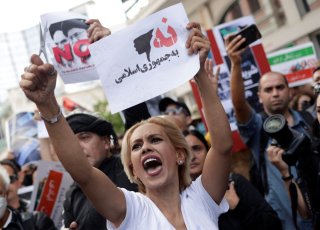 Iran is entering its third week of nationwide protests calling for the Islamic Republic's downfall. The Iranian regime has responded to these protests by indiscriminately killing, assaulting, and imprisoning unarmed protesters.

Though official numbers are unknown, opposition groups have reported 300 deaths and 15,000 arrests in the protests. With ubiquitous chants of “death to Khamenei” (referring to Iran’s supreme leader Ali Khamenei) and “death to the dictator,” Iranians have made their intentions clear: they are fighting for a complete overthrow of the ruling theocracy and will not be satisfied with meaningless “reforms” that preserve the illegitimate regime.

On Monday, President Biden released a statement condemning the Iranian government’s brutality and supporting Iranian protesters. Statements of solidarity are a good first step, but Biden needs to back up his words with action. Specifically, the United States must adopt a comprehensive policy that isolates the regime in Tehran and supports the Iranian people’s right to overthrow their dictatorship and determine their own democratic government.

Despite their statements of solidarity, the Biden administration continues to negotiate with Iran to revive the Obama-era nuclear deal that the Trump administration correctly withdrew from in 2018, also known as the Joint Comprehensive Plan of Action (JCPOA). When asked about the contradiction between supporting Iranian protesters while pursuing nuclear negotiations, Biden’s special envoy for Iran, Robert Malley, doubled down on the outdated deal, saying, “we can do both things at the same time.”

Setting aside the JCPOA’s inherent flaws in addressing Iran’s nuclear ambitions, any nuclear deal with Iran is fundamentally a policy of regime preservation, making it wholly incompatible with the Iranian people’s demands for regime change.

At its core, any nuclear negotiation with Iran is based on the following implied assumption: Khamenei’s regime is here to stay and America’s strategy should be to engage and negotiate with his regime to reach a compromise on the nuclear program. However, Biden should note that it is impossible to compromise with a regime that chants “death to America” and sponsors terrorist attacks against Americans and American allies.

Assuming the Islamic Republic regime will persist is a fundamentally flawed worldview that ignores the reality on the ground in Iran. The regime in Iran is arguably the weakest it has been in its forty-three-year history. Corruption and brutality are deeply ingrained in the clerical regime, and the latest wave of uprisings represents a tipping point in Iranian society.

Every day, the world is witnessing unprecedented scenes of unarmed protesters fighting back and chasing away armed security forces. Chants like “we’ll fight, we’ll die, we’ll take back Iran” and “we won’t return home until we have a revolution” reflect a society that is no longer afraid to speak out.

Khamenei and his thugs used to be able to rely on sheer brutality to intimidate and suppress dissidents. Violence is no longer deterring Iranians from all walks of life from pouring out in the streets every day, calling for the overthrow of the entire theocratic regime. The Ayatollah and his henchmen know their days are numbered and are desperately scrambling to extend their rule over a society that is dead set on toppling the government.

As the mullah’s outlook becomes increasingly bleak, they will likely intensify their brutality at home, terrorism abroad, and nuclear blackmail with the United States in a last-ditch effort to save the regime. The Biden administration should not fall for this trap.

A return to the JCPOA would provide a massive economic windfall to the world’s largest state sponsor of terrorism. This money would line the regime’s loyalists' pockets and terrorist proxies.

Now is not the time to legitimize the regime and extend them a lifeline via billions of dollars of sanctions relief through a renewed nuclear deal. Now is the time for the United States to take a firm stand on the right side of history by supporting the Iranian people’s struggle for freedom, democracy, and human rights.

If the Biden Administration wants to protect the shared interests of America and the Iranian people, it should immediately walk away from the negotiating table and return to the policy of maximum pressure employed by the Trump administration. Such an approach will necessitate a solid commitment to the Iranian people’s fight for freedom, backed up by a policy of weakening the regime through economic sanctions and diplomatic isolation.

Iran is ripe for political change in the direction of democracy. This inevitable future is the best outcome for both the Iranian people and American interests because it will result in a democratic government in Iran that respects human rights and international norms.

The United States should embrace this outcome by siding with the grassroots democratic opposition and their demands for pressure on the regime, not by bailing out the dying regime through an outdated nuclear deal.

Seena Saiedian is a student at UC Berkeley’s Haas School of Business and an Iranian-American writer, speaker, and human rights advocate. Follow him on twitter: @SeenaSaiedian