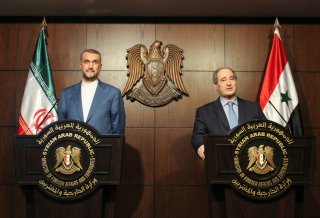 In 2013, following Syria’s two-year-long repression of democracy activists, President Barack Obama declared that President Bashar al-Assad “has lost his legitimacy” and “will be held accountable.” “I think Assad must go,” Obama continued. In the years that passed, Syrian diplomats in suits met their counterparts in posh offices, attended conferences and conventions, posed and paraded before various flags while pro-Assad forces arrested, tortured, and executed innocent civilians. Nearly a decade has passed since that hollow statement and Assad remains the tyrant of Syria, supported by his patrons in Iran and Russia.

Also in 2013, politicians in Washington were entranced by the election of Hassan Rouhani as Iran’s president and his “charm offensive.” Seeing him as a “moderate” who would accompany the West on a path of denuclearization of and diplomacy with the Islamic Republic. Yet, during his eight-year tenure, the Iranian regime arrested, tortured, and executed thousands of citizens. All the while, Iran continued to menace its neighbors, and today, it stands on the verge of developing a nuclear weapon.

There are three takeaways from the chaos and bloodshed in Syria and Iran:

Dictators are not diplomats. Traditional practices of diplomacy must be adjusted when dealing with dictators because, well, dictators don’t abide by global norms; they set their own rules. The sole priority of dictators is survival and to do that, they will transgress any moral code and violate any treaty. As seen in Syria and Iran, this includes killing their own people and fomenting chaos to bolster their own standing. In a scheme to likely create new hysteria to cover the public outrage, the overcrowded Evin prison, where political prisoners—including ethnic, religious, gender, and sexual minorities—convicted of “enmity against God” and dual national prisoners are detained, was suspiciously set ablaze on October 15. The Iranian regime finds justification for any act of violence or mayhem. Dictators who seek absolute power can never act in good faith with diplomats from democracies where people have the power.

When unarmed civilians are killed, the West has a moral obligation to act in solidarity with them. Isolationists might choose to frame such engagement as interventionism, but in reality, it is humanitarianism, the kind of gesture that can save lives just as emergency relief can save lives in the aftermath of a natural disaster. Today the Iranian people are dealing with a human-made disaster caused by their government; we cannot stand idly by in the face of such need. Images from Iran show armed forces in riot gear yanking, beating, sexually assaulting, shooting, and killing unarmed protesters in the streets.

False dichotomies lead to bad outcomes. Boxing themselves in a dichotomy of alternatives between diplomacy and full-blown war, American politicians have prudently chosen the route of diplomatic agreements with Iran and Syria as better alternatives to war. In doing so, they have neglected the reality that dictators can’t be trusted with weapons of mass destruction. A deal with Syria’s Assad after the infamous redline statement was set with the promise that Syria’s chemical weapons will go to Russia. But as we witnessed, Russia and Syria did not act as honest brokers, Syria’s Assad used chemical weapons on his own citizens and Russia was emboldened to attack Ukraine.

In 2015, the Obama administration presented the world with a similar false choice that the only viable path forward with Iran was either an agreement that deferred nuclearization or armed conflict. The public was told there was no other alternative. Literally, opponents of the deal were derided as “warmongers.” Hindsight reveals the emptiness of this positioning. Indeed, the war-avoidance policy enabled the Iranian regime to wage war against its own people most notably in 2009, 2017, 2019, and again today, not to mention Iran’s export of proxy war to the region.

We have reached a point of convergence of failed diplomatic agreements and dictators who abuse them. For now, these failed policies have a minor impact on the lives of Americans and Western countries. The most noticeable impact is the rise of gas prices and the ensuing economic challenges, but they are detrimental to the lives of innocent civilians in the region and can have long-term consequences in the United States.

The administration should look beyond the outdated pundits and regime apologists inside the Beltway, and engage a broad range of stakeholders to develop a new pathway for real democracy. If the West is committed to not repeat the mistakes of the past and implement some meaningful measures, it can forge a third way that honors the protestors and rejects the tyrants in Tehran.

Shadi Martini served as general manager of a hospital in Aleppo during the conflict and was later elected as chairman of the General Assembly for the “Republic Party.” He’s the Executive Director of Humanitarian Relief and of Multifaith Alliance (for Syrian Refugees). He is a member of Anti-Defamation League’s Task Force on Middle East Minorities.

Born and raised in Iran, Marjan Keypour Greenblatt is the founder and director of the Alliance for Rights of All Minorities and StopFemicideIran. She is a non-resident scholar at Middle East Institute and a member of Anti-Defamation League’s Task Force on Middle East Minorities.