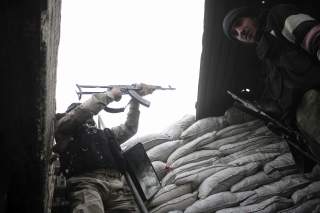 Over the last few months, the status of America’s presence in Syria has been a roller coaster of epic proportions. President Donald Trump’s announcement in late December that the United States would withdraw all troops from the country in the shortest time possible came as a shock to the military, to many in the administration itself, and most especially to those in northern Syria where U.S. troops are operating. Later it was announced that the United States would keep four hundred service members in the country, which will shift the burden to allies but preserve the precarious balance that currently exists in the country’s north. The details remain unclear and may consist of an even slower drawdown. President Trump had campaigned on getting the United States out of Syria after the defeat of the Islamic State, but no one expected the announcement to come so soon and so suddenly. The announced withdrawal prompted criticism from the president’s friends and foes alike, but also was welcomed in some corners. Those supportive of the president’s move to withdraw pointed out, rightfully so, that many of those advocating for a U.S. presence in Syria were the same figures who led us to war in Iraq. They were wrong then, and are wrong now, the argument goes. But is the situation of Syria in 2019 comparable to that of Iraq in 2003?

Reading the predictions and analysis about the impending U.S. invasion of Iraq in 2002 and 2003 is like reading a fantasy novel. Most of those tasked with informing the public about the war were spectacularly wrong about what would happen, and it is surprising more careers did not end as a result. In fact, the Washington Post editorial board wrote in February 2003: “After Secretary of State Colin L. Powell's presentation to the United Nations Security Council yesterday, it is hard to imagine how anyone could doubt that Iraq possesses weapons of mass destruction.” (There weren’t any weapons of mass destruction left in Iraq.) The whole debate leading up to the war could be a seminar in epistemology: how do we know what is true and what isn’t, and with what certainty?

Many of the same “experts” who got us into Iraq then advocated for an aggressive U.S. stance against dictatorial Arab regimes in 2011, and they were joined by a wider range of voices on the Left and Right who felt that the moment for change in the Arab world had finally come as protestors marched in the streets of Aleppo, Cairo, Benghazi, and elsewhere.

Many argued that the Arab Spring of 2011 was fundamentally different from the 2003 invasion of Iraq, because in 2003 the United States was toppling a dictatorship unilaterally (despite the allied support), while in 2011 the people themselves were rising up to oppose their own dictators. While listening to the hopeful rhetoric about democracy and peace during the Arab protests in 2011, however, it is easy to forget that much of the same rhetoric had existed among Iraqi exiles leading up to the U.S. invasion of 2003. In both cases, however, rhetoric failed to match reality. There was no political plan or movement to rally around, and like Iraq in 2003, unity in places like Libya and Syria in 2011 came from a negative, rather than a positive. Everyone was against Muammar el-Qaddafi or Bashar al-Assad—what came next was undefined.

It is understandable, then, that President Trump is hesitant to listen to the same “experts” and policymakers that drove us to war in Iraq, and are seemingly pushing us to an unnecessary war with Iran, when they say we must remain in Syria. They never learned their lesson from Iraq, and only a few ever came clean about their responsibility for the terrible mistake of the 2003 invasion. Rep. Walter Jones, recently deceased, sought atonement for his initial support of the war by writing letters to the families of those killed in Afghanistan and Iraq. His was a lonely path; most experts kept advocating for war elsewhere, and they predicted disaster wherever the United States was not busy overthrowing a government.

Unfortunately, our public debate over a U.S. presence in the Middle East is dominated by those who want all or nothing: U.S. troops in every country of the region all the time, and those who want to withdraw from everywhere immediately. This ignores the fact that not all interventions are created equal, and that the situation in northern Syria is fundamentally different from Iraq.

In northern Syria, our ally to defeat the Islamic State has been the Syrian Democratic Forces, a Kurdish-led amalgamation of the myriad religions and ethnicities found in the area. United States and allied support for the Syrian Democratic Forces allowed them to remove the extremist group from its former strongholds in places like Raqqa and Manbij, and with our help its members eliminated the last remaining piece of territory held by the terror group on March 23.

President Trump rightfully sees that the United States had no role to play in Syria from the beginning. Under President Barack Obama, the U.S. tepidly funded opposition groups with arms, but never fully committed to removing Assad from power. He was criticized for not going all in for the opposition, but the opposition had no coherent plan to govern the country. Protestors called for freedom and democracy, but seemed to confuse these concepts with anarchy, as they sought to bring down every functioning aspect of the Syrian state, along with its leader. Areas where the opposition did gain control eventually became safe havens for extremists, as there was no functioning security apparatus that could keep the wolves at bay. As it turns out, maintaining security and stability in Syria is hard work, as in Iraq.

Back to Iraq: in the chaos following the 2003 U.S. invasion, most Iraqis would have said that America was an occupying force in their country. Iraqis I talk to refuse to believe that America was sincere in its intention to institute democracy in the country, because they refuse to believe that the most powerful country on earth did not know what it would create when it removed Saddam Hussein from power. America knew that chaos would ensue, and therefore some other intention lay at the heart of America’s invasion. Stealing oil and protecting Israel are the most common explanations given, but think of the craziest conspiracy theory possible and some Iraqi has used it to explain the U.S. invasion of their country.

But is the U.S. presence in Syria also an occupation? Not if you ask those living in areas where U.S. troops operate. Locals throughout northern Syria see America as a guarantor of stability and a bulwark against aggression by Turkey or the Syrian regime, though most are realistic about the fact that America is looking after its own interests and will someday leave. Most importantly, though, they see us as a partner in the fight against the Islamic State, whose presence continues under the surface. Of course, there are differing opinions, but after two trips to the area over the last few months, I am confident that America is not seen as an occupying force by the vast majority of people. So why the difference from Iraq? Because Syria 2019 is not Iraq 2003. It is unfortunate that those who got Iraq so wrong just happen to be right about Syria; it discredits the case for staying.

Unlike the Syrian opposition or U.S. officials in Iraq post–2003, the Syrian Democratic Forces understand that freedom is predicated on stability. Its members have worked hard to get local buy-in to their political project, known as the Autonomous Administration, which reflects the unique nature of the area of Syria they inhabit. Historically, the areas north and east of the Euphrates River, known as al-Jazira, had closer ties to northern Iraq and southern Turkey than they did to the rest of Syria. While most of Syria is overwhelmingly populated by Arabs, northeastern Syria is a patchwork of ethnicities and religions. Arabs, Kurds, Armenians, Syriacs, Turkmen, Circassians; Muslims, Christians, Yezidis . . . the list goes on and on. The Syrian Democratic Forces has worked with all of these communities to ensure they are partners in the governing process, all the while rejecting the Arab chauvinism that characterizes the Syrian regime. It is working better than many would expect, and it may be the key to preventing a resurgence of the Islamic State in the area. But it will not last without outside support, given Turkish and Syrian regime threats to invade should the United States withdraw.

Four U.S. service personnel were killed in the city of Manbij on January 16. This tragic event underscores that the Islamic State is not yet eliminated—even in areas no longer under its direct control. But those Americans were killed while eating out at a local restaurant, which had become known as a hangout for foreign troops in the area. Sen. Lindsey Graham and Sen. Jeanne Shaheen had visited the same restaurant months earlier. Anyone who was in Iraq in the years following 2003 will understand how significant it is that Americans were out and about eating among the local population. Clearly, they made themselves a target by developing a predictable pattern, but the fact that they could even become complacent in this way is telling. Indeed, Syria 2019 is not Iraq 2003.