Syria Is Still a Mess 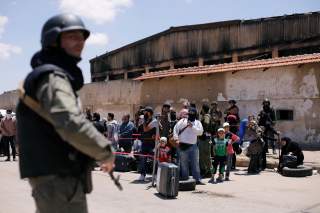 Sen. Lindsay Graham, a prominent Republican voice on national security and international policy, spoke out last week during a visit to the Middle East warning Turkey against further military involvement in the Syrian civil war. After meeting with Turkish President Erdogan, Sen. Graham cautioned the NATO ally—“You don’t want any further incursions in Syria by the Turkish military, you’ll get yourself in a quagmire.”

In a world filled with hyperbole, political spin, and fake news, it is rare to hear such an accurate and evidence-based statement as this. The civil war in Syria, raging for more than half a decade, has been a sterling example of a ‘quagmire’ in the geopolitical context since its inception. Even before the fighting started, Syria was one of the most complicated and volatile states in the Middle East.

Tracing its troubled history from the downfall of the Ottoman Empire and the much-maligned Sykes-Picot agreement of 1916, the Syrian state over the past century has existed as a nonsensical mixture of historically antagonistic groups forced to live under the same government through external policing or internal authoritarians. The Arab Spring movement simply catalyzed the longstanding grievances of Syrian Sunnis against Alawite rulers in Damascus, and the simmering fault-lines erupted to the surface.

To even create a baseline understanding of this conflict is difficult given the hundreds of factions and shifting alliances on the ground, not to mention complications added by the differing interests of outside parties.

Turkey, for its part, has significantly more at stake in the outcome of than most other nations, sharing a long border with the fractured state and wary of instability in their own country. But their opposition to the empowerment of the Syrian Kurds on their border puts them at odds with western countries like the United States, who want to use the Kurds to fight extremist groups as well as put pressure on President Bashir Assad’s government. Meanwhile, Russian leaders along with Iran continue to support the Assad government and have come dangerously close to starting a larger conflict with Turkey and NATO.

This makes the Syrian war a proxy conflict between NATO and Russia, as well as a proxy battle between the U.S. and Iran as the two countries negotiate over the future of Iran’s nuclear program and international sanctions.

So yes, the Syrian civil war is still very much a mess, one that any external power should be very wary of entering.

Of course, Sen. Graham’s warning to the Turkish government was not made out of concern for Turkish interests, but to remove the impediment that Turkish recalcitrance poses to American support of the Syrian Kurds and our future in the conflict. In fact, a majority of American legislative and executive leaders from both sides of the aisle have supported further U.S. involvement in the conflict, from training and equipping rebel groups to calling for no-fly zones and greater military intervention.

Is the United States immune from the strategic contradictions and tactical complexities that other countries would suffer from in Syria? Our involvement there since 2013 shows that we are not.

The initial train and equip program for “vetted” members of the Syrian opposition—a $500 million initiative—was cancelled in 2015 after failing to come close to meeting expectations, but also due to growing concerns that U.S-provided weapons were making their way into the hand of the very extremist groups we wanted to fight. Similar factors doomed the CIA’s program in President Trump’s first year in office. Terrorist groups proliferated despite the efforts of the international community to address funding and manpower pipelines. Both the Trump and Obama administrations steered away from sending large numbers of U.S troops into Syria out of concerns about public support and the likelihood of strategic success.

American leaders, especially those with congressional oversight responsibilities, would be better off taking a step back and reviewing our involvement in the Syrian conflict with a mind towards actual national security interests—protecting our homeland and the rights and freedoms of the American people.

Are these interests gravely impacted by a civil war in a largely resource-barren country on the other side of the world, and have our efforts there enhanced our interests in a way that is reasonably justifiable to the costs? Honest analysis would show that we have even less reason or purpose for intervention in this quagmire than neighboring countries like Turkey and that there are more worthy causes for American time and treasure.

Robert Moore is a public policy advisor at Defense Priorities. Having spent nearly a decade working defense and foreign policy issues on Capitol Hill, Robert has extensive knowledge of, and experience with, the policy-making process, including how Congress shapes U.S. national security. He most recently served as the lead staffer for Sen. Mike Lee on the Senate Armed Services Committee. He also advised Sen. Lee on matters of foreign relations, intelligence, homeland security, and veterans affairs. He previously worked as part of Sen. Jim DeMint's national security team.

A Plan for Syria