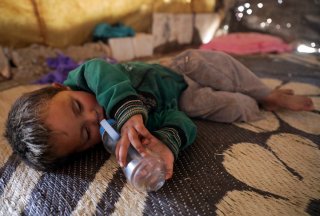 The Syrian civil war is about to turn ten years old. Fighting has ebbed into an uneasy stalemate, but Syria remains divided. The Assad regime has regained control of most territory, but the U.S.-backed Kurds control the northeast, Turkey controls much of the northern border region, and the northwest province of Idlib remains a contested space with a large concentration of Al Qaeda. Internationally-sponsored negotiations to arrive at a political solution through both the United Nations Geneva process and the Russian-Iranian-Turkish Astana process have petered out.

A “no deal” resolution appears to be the most likely outcome of this complex conflict, per whispers in diplomatic circles. In other words, it is feasible that no formal agreement will take place to end Syria’s war and start the peace. The status quo could freeze in place.

A no-deal outcome eliminates the prospect of most of Syria’s 5.6 million refugees in neighboring countries ever returning to live in Syria—despite this month’s limp conference in Damascus during which Bashar al-Assad encouraged refugees to come back. The forever wars are creating forever refugees.

Without a formal peace agreement that commits to safety for returnees and creates a foundation for investment in Syria’s demolished infrastructure, Syrians will not go home. Syrians abroad fear returning because of reports of returnees being arrested, imprisoned, and tortured. And it would be difficult to repopulate many areas without a concerted effort at rebuilding, which will not happen as long as international investors view the unresolved war as posing too much risk, especially if U.S. sanctions remain in place.

Over half of Syria’s pre-war population of 23 million is displaced, with 6.2 million displaced internally, 5.5 million refugees elsewhere in the Middle East, and a million in Europe. Only 250,000 Syrians who fled the country have returned to Syria. The sheer numbers of Syrian refugees have changed the demographics of the Middle East. Up to a third of the people in Lebanon are Syrian refugees. Over four million of them reside in Turkey. And 10 to 20 percent of the population of Jordan is now Syrian.

Yet these countries host the Syrians on the condition that most will eventually return to Syria.

The circumstance of Syrian refugees does not appear to be a workable permanent situation. Host country populations—also struggling economically—resent the presence of the Syrians even though they live in grinding poverty. The main host countries have set policies that make it exceedingly difficult for most Syrians to work legally, out of fear of high unemployment rates for their own citizens. This means that, without enough humanitarian aid, most Syrians work under the table, below the minimum wage and without the safety and social protections provided to citizens. Access to education and healthcare is at alarmingly low levels, with over half of children out of school. The Syrians declined from a middle-income population to one denied basic human development.

These circumstances are terrible but perhaps seemed like something that would have to be accepted when Syrian exile was viewed as temporary until the war would end. But a no-deal settlement means that prospects for Syrian refugee return at scale may not appear in the next decade—or during this lifetime.

The Middle East is becoming a region with permanent underclasses of displaced people, awaiting solutions that do not come and without the legal rights to start lives as citizens.

The Palestinians, Somalis, and Afghans are prime examples of the creation of forever refugees. The Palestinians fled Israel in 1948 and 1967 to live under UN protection in Lebanon, Syria, Jordan, the West Bank and Gaza. Today, registered Palestinian refugees number 5 million because of population growth. Displaced more than half a century ago, many still reside in camps that have morphed into urban slums—with their education provided by the United Nations and funded by external donors such as the United States and European Union. In Lebanon, they are legally restricted mainly to low-skill work.

Similarly, communities of Somalis and Afghans have been displaced for decades. Some 1.3 million Iraqis remain internally displaced after conflicts with the Islamic State. Globally there are now eighty million people displaced by conflict in the world—a number similar to the population of Germany. In recent decades, lower numbers and proportions of refugees have returned to their countries.

Without increased impetus in diplomatic leadership to negotiate a formal settlement, such as from the next U.S. administration, the Syrians could end up sentenced to continue in a state of squalid limbo, like the Palestinians, in perpetuity. In a region in which there are continuous waves of warfare, creating even more generations with truncated opportunities should be of concern to the entire world.

The next presidential administration in the United States could choose to include diplomatic leadership of a Syria settlement as a priority. And if such a solution cannot be found, then urgent priority could be given to finding ways for refugees to begin normal lives in other countries, with adequate opportunities for jobs and education. The human and economic tolls are too great to continue with the status quo.

Shelly Culbertson is a senior policy researcher at the nonprofit, nonpartisan RAND Corporation.