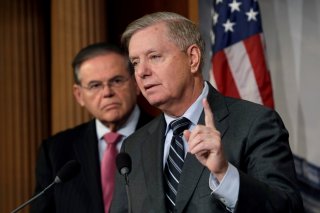 Representative Mike Waltz (R-FL) and Senator Lindsey Graham (R-SC) have thrown their support behind the “Panjshir resistance” to Taliban rule in Afghanistan. The two congressmen issued a statement on Friday morning, in which they called for political and military aid to the group and called on President Joe Biden to recognize the group as the legitimate successor to the Afghan government.

“After speaking with Afghan Vice President Amrullah Saleh and representatives of Ahmad Massoud,” the statement reads, “we are calling on the Biden Administration to recognize these leaders as the legitimate government representatives of Afghanistan. We ask the Biden Administration to recognize that the Afghan Constitution is still intact, and the Afghan Taliban takeover is illegal.”

The statement praised the leadership of the Panjshir resistance for remaining in the country and creating a “safe haven” for Afghans and foreign citizens seeking freedom from Taliban rule. It also pushed Biden to officially designate the Taliban as a terrorist organization. While Tehrik-i-Taliban Pakistan, or the “Pakistani Taliban,” is included on the U.S. State Department’s list of Foreign Terrorist Organizations (FTOs), the Taliban in Afghanistan is not–largely because successive U.S. administrations have sought to negotiate with the Afghan Taliban but are generally forbidden from negotiating with terror groups.

Though the Panjshir Valley itself remains unoccupied by the Taliban, the group has tightened its control around the surrounding area, blocking roads in and out and severing phone and internet access to the valley. Negotiations between the Taliban and Panjshir’s leadership remain ongoing. Even if the resistance group is able to retain control of the valley against a Taliban attack, it seems very unlikely that it could liberate more of the country from the Taliban.

Waltz and Graham’s statement will probably not influence the Biden administration’s policy, as it appears to be attempting to build a relationship with the Taliban—a relationship that would be harder to build if it emerged that the administration was supporting a rebel group. Secretary of State Antony Blinken has indicated that the U.S. government would be willing to “work with” a Taliban-led government if it vowed to respect human rights, allow Afghans to emigrate, and refused to tolerate international terrorist activity.

Still, Waltz has indicated that his efforts to support the Panjshir resistance will continue, describing the mission to Foreign Affairs as “a play out of Charlie Wilson’s playbook”—in reference to Rep. Charlie Wilson, a Texas congressman who played an outsized role in funding and arming the Afghan mujahideen against the Soviet Union in the 1980s.