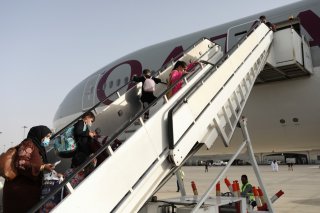 Following the Taliban capture of Kabul on August 15, with hundreds of American civilians still present in the city, there were fears that the group would attempt to institute reprisals against Americans or otherwise prevent them from leaving the country.

However, while there have been reports of reprisals against some Afghans who served alongside the United States during its twenty-year presence in Afghanistan, U.S. citizens have mostly been left alone, possibly due to the Taliban’s growing concerns about its international reputation and its desire for diplomatic recognition abroad.

As a consequence of this, many U.S. citizens wishing to leave Afghanistan have been able to leave without pushback from the country’s new government. Business Insider reported that Project Dynamo, an NGO created to help evacuate Americans and Afghans attempting to leave the country, had had few difficulties in evacuating Americans.

According to the group’s leadership, more than 30,000 people have so far applied for help in leaving the country. the group’s mission is twofold. After receiving and processing the applications, it first confirms that the applicants have the correct paperwork to leave Afghanistan and enter the United States; once this is complete, it reaches out to the Taliban’s administration to receive clearance to exit the country.

Jen Wilson, a volunteer for Project Dynamo, described the second step in this process as surprisingly easy. “They want Americans out,” she observed, “so when it comes to us moving Americans out of the country, they’re happy to assist.”

During the U.S. airlift from Kabul’s airport from August 14 until August 31, Taliban fighters surrounding the airport were reported to be highly confrontational, preventing additional evacuees from entering. However, Wilson said that Dynamo had avoided this treatment by communicating with the Taliban’s leadership in advance.

In the past week, Project Dynamo evacuated around 100 U.S. citizens and foreign nationals with green cards and Special Immigrant Visas (SIVs) from Kabul to the United States, with a delay after customs officials insisted on a lengthy screening process.

The Kabul airlift evacuated more than 100,000 Americans and Afghans from the country, mostly to Al-Udeid Air Base in Doha, Qatar. On Friday, President Joe Biden announced that he would raise America’s refugee cap to 125,000 Afghans, potentially allowing for further settlement in the United States.