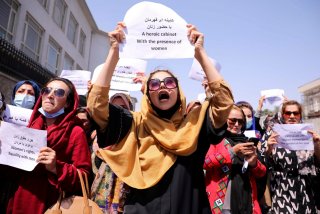 On Sunday, the Taliban’s leadership in Kabul issued a sweeping directive to female municipal workers within the nation’s capital: to quit their jobs and return home, immediately.

The group’s appointed interim mayor of Kabul, Hamdullah Namoni, made the announcement during his first news conference. Namoni insisted that all women in the city remain in their homes, whether they were employed or not.

The mayor included exceptions for women whose jobs were vital to the city’s functioning, but only as a temporary measure. Jobs exempted in this way include staff in the city’s engineering department, as well as female public toilet attendants. (It remains unclear who will be using the public toilets intended for women if they are all staying home.)

“There are some areas” of work, Namoni said at the press conference, explaining his exception, “that men can’t do it, [so] we have to ask our female staff to fulfill their duties,” adding that there was “no alternative” for the time being. While Namoni did not rule out women returning to work in the future, he said that they would have to do so in a way that kept them separate from men—an extremely difficult demand for public workers in many respects.

Kabul’s municipal workforce numbered around 9,000 prior to the Taliban takeover. Roughly one-third of that number is composed of women, making it difficult to enact sweeping changes overnight without causing chaos and a lack of public services, according to the Associated Press.

The group also replaced the previous government’s Ministry of Women’s Affairs with the “Ministries of Prayer and Guidance and the Promotion of Virtue and Prevention of Vice,” a catch-all term used in other countries to refer to the religious police.

While the Taliban pledged in its initial press conference on August 17 that women would continue to enjoy the rights of education and employment, the group’s primary spokesman, Zabihullah Mujahid, added the caveat that they would only enjoy these rights “within the confines of Islamic law”—which, in practice, has been used to block them from all areas of public life in the past.

Women in Kabul and elsewhere in the country who have protested the new rules have been the subject of crackdowns. A group of women protesting in the capital on Wednesday, September 8, was broken up by Taliban militants using whips and electric batons, according to the BBC.