Taliban Leadership to Rank and File: Stop Having Fun 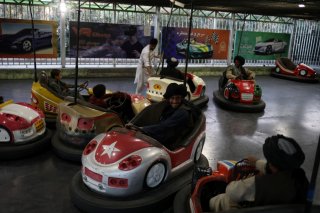 Following the Taliban seizure of Kabul on August 15, the group has occupied the city, bringing in thousands of fighters from Afghanistan’s rural areas and stationing them at key positions across the city. Most of them, per reporting from the Wall Street Journal, are from small towns and villages and had never been to a major city prior to the Taliban occupation.

Consequently, there have been reports—and photos and videos on Twitter—of off-duty Taliban soldiers making the most of their time in the city. Taliban fighters have visited Kabul’s zoo, filmed themselves playing at amusement parks and gyms, and relaxed at the opulent mansions of evacuated warlords.

This tendency has irked the Taliban’s senior leadership, which has put out official statements warning the group’s foot soldiers that they should focus on their duties.

“Stick to the tasks [to which] you have been assigned,” insisted an audio recording put out by Mawlawi Mohammad Yaqoob on Thursday, according to WSJ. “You are damaging our status, which has been created with the blood of our martyrs.”

Among his other proscriptions, Yaqoob forbade Taliban fighters from driving quickly in the capital, showing long hair, and wearing Western clothing, notably white, high-top sneakers, which some members of the group have taken to wearing.

“This is the behavior of the warlords and gangsters of the puppet regime,” Yaqoob warned, referring to the U.S.-backed government of Ashraf Ghani, prior to his departure from the country. “If we continue to act like this, God forbid, we will lose our Islamic system.”

Yaqoob also forbade Taliban fighters from taking selfies, warning that the pictures could be used to identify and track its combatants by hostile forces. While fighting in Afghanistan has precipitously declined following the end of the country’s twenty-year war, an insurgency conducted by the Islamic State’s “Khorasan Province,” or ISIS-K, continues against the Taliban.

Various atrocities have continued under Taliban rule. While the group made early commitments to refrain from seeking retribution from the conflict and protect the rights of women and religious minorities, it has since reneged on some of those promises, carrying out killings of members of the former Afghan security services. The group has also closed down women’s schools across the country and fired nearly all of Kabul’s female public sector workers.