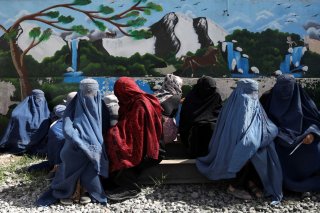 Sher Mohammad Abbas Stanikzai, the deputy minister of foreign affairs within the Taliban-led government of Afghanistan, urged the country’s senior leadership to reopen girls’ schools across the country during a meeting in Kabul on Tuesday—a rare public challenge from within the group’s ranks to its policy of forbidden girls’ education from sixth grade up.

During a Taliban meeting in Kabul on Tuesday, Stanikzai emphasized that there was no support for the ban in Islamic scripture, ostensibly the basis for the Taliban’s laws. When the group closed girls’ schools in March hours after reopening them, they insisted that they had done so because the girls’ uniforms were not modest enough, although they were the same uniform that girls had used in schools for roughly a decade.

“It is very important that education must be provided to all, without any discrimination” under Taliban rule, Stanikzai said, according to Al Jazeera. “Women must get an education. There is no Islamic prohibition for girls’ education.”

The deputy minister also argued that Afghan society overwhelmingly supported a return to school for young girls, speculating that anti-Taliban factions within Afghanistan could use widespread anger to their advantage to “create a gap between the [Taliban] government and the people.”

“If there are technical issues, [they] need to be resolved, and schools for girls must be opened,” he said.

In addition to closing girls’ schools, Taliban authorities have fired thousands of women from their jobs, ordered them to wear head coverings in public, and restricted women from traveling beyond a certain distance without the accompaniment of a male relative. The group has claimed that it will reopen girls’ schools in the future after making changes, but it has not provided a timeframe for doing so or elaborated on what changes would be made.

The Taliban’s ban on girls’ secondary education has been widely condemned worldwide. The United Nations Mission in Afghanistan has described the ban as “shameful,” and it has been cited as a significant obstacle toward recognition of the Taliban-led government after it defeated its predecessor, the U.S.-backed government of President Ashraf Ghani, in August 2021.

During the Taliban’s first period of rule from 1996 until 2001, the group closed nearly all girls’ schools and enacted sweeping restrictions on their participation in public life. In its first days in power in August 2021, the group’s spokesman claimed they would not attempt to re-implement their earlier restrictions. However, the group has enacted some of them over the past year.