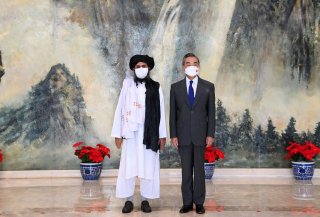 One country that has reacted optimistically to the Taliban takeover—at least on the surface—has been China, whose state media has described the group’s victory as the “will and choice of the Afghan people” and has pledged to keep its embassy in Kabul open as the group consolidates its control. Chinese media outlets have also celebrated the United States’ chaotic withdrawal from Afghanistan and the subsequent collapse of the U.S.-backed government, framing it as a sign of American incompetence and unwillingness to support its allies.

China’s interests in Afghanistan are mostly economic rather than political. Afghanistan is resource-rich, with many valuable resources, including gold and copper, which China seeks to import. The country is also a convenient destination for Beijing’s Belt and Road Initiative, which seeks to expand China’s commercial links with Asia, Africa, and Europe. As the Taliban has largely been shunned by the West, Chinese investment and trade is a lucrative proposition.

Afghanistan shares a small border area with China; the country is adjacent to the Xinjiang autonomous region within China, where Beijing’s actions toward the province’s Uyghur population have been the subject of widespread criticism within the West.

Because unrest in Afghanistan has fueled Islamic activism among Xinjiang’s Uyghurs in the past, China has remained adamant that international terrorist groups not be allowed to operate under the protection of any future Afghan government, as Al-Qaeda and other Islamist groups, including some Uyghur ones, did in the 1990s.

In July, Chinese Foreign Minister Wang Yi met with a Taliban delegation, including prospective leader Mullah Abdul Ghani Baradar, and urged the group to “make a clean break” from the terror organizations that had supported it in the past. Baradar pledged in return that the Taliban would not allow any organizations within the country to “engage in acts detrimental to China.”

China also enjoys particularly close relations with neighboring Pakistan, which played a major role in the formation and support of the Taliban during the 1990s and has long been accused of covertly supporting the militant group.