The Taliban Want International Recognition—But No One is Offering 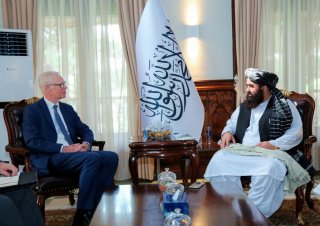 Following its August seizure of Kabul, the completion of its takeover of Afghanistan, and the end of the country’s twenty-year war, the new Taliban government has attempted to secure recognition of its status as Afghanistan’s legitimate government abroad.

Since the takeover, the group’s members have met with officials from a handful of nations and international organizations, including the United States, the United Kingdom, and the United Nations. So far, however, no nation has displayed willingness to officially recognize the “Islamic Emirate of Afghanistan,” the Taliban’s official name for itself.

The Taliban’s diplomacy has not been fruitless. After the Taliban engaged with UN officials, it extracted a promise that the international organization would continue to operate its badly-needed aid programs in the country. The group has also received aid shipments from Qatar, China, Uzbekistan, the United Arab Emirates, and Pakistan, the latter of which has long been suspected of tacitly supporting it. However, none of these nations, even Pakistan, has officially recognized it yet. Moreover, when asked, the UN rebuffed Taliban leaders’ requests that they be allowed to address the General Assembly.

One reason that the group has experienced difficulties in achieving recognition has been the presence of international terrorists, some of whom have had bounties placed on their heads by the U.S. government, within its new cabinet. Khalil Haqqani, a member of the Taliban-aligned Haqqani network and Afghanistan’s new Minister of Refugees, was designated by Washington as a “specially designated global terrorist” in 2011. He remains openly present in Kabul, in spite of an ongoing $5 million reward for his capture.

From 1996 until 2001, the Taliban’s last period of rule over Afghanistan, the “Islamic Emirate” was formally recognized by three nations: Pakistan, Saudi Arabia, and the United Arab Emirates.

After the group opened a political office in Doha in 2011, its emissaries visited a number of foreign countries in search of political support, including Iran, Russia, and China. Many of these relationships have endured; despite mutual hatred in the 1990s, Iran has cautiously embraced the Taliban’s new government, while Russia and China have separately indicated their willingness to continue economic relations with the group.

Other states—prominently Canada and the United Kingdom—publicly ruled out recognition of, or relations with, the Taliban until it formed an interim government that included other factions, including women and representatives from Afghanistan’s predominantly Shia Hazara community, which has long been a target for Taliban atrocities.