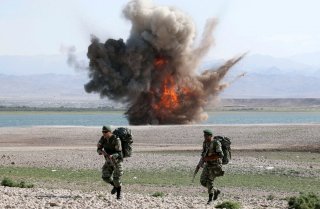 In a show of force directed at Azerbaijan amid rising tensions, Iran’s military has initiated a series of exercises near the neighboring country’s border. Footage broadcast on Iran’s state-run television portrayed tanks and artillery taking part in the exercises in northwestern Iran, and broadcasters claimed that Iran had tested a domestically-manufactured long-range drone.

Tensions between Iran and Azerbaijan have escalated throughout 2021. In September, troops from Iran’s Islamic Revolutionary Guard Corps (IRGC) deployed to the border in response to joint military exercises between Azerbaijan, Turkey, and Pakistan.

Iran’s anger also stems partly from Azerbaijan’s quiet security partnership with Israel, which it views as a potential threat to its territory. However, the small Caspian nation’s ties to Tel Aviv have proven highly advantageous. Israeli and Turkish drone technology, as well as other assistance, were crucial to Baku’s victory over Armenia in the Second Nagorno-Karabakh War from September to November 2020. In that war, Iran proclaimed neutrality and refused to aid either side, despite its traditionally closer ties to Armenia.

Another point of contention between the two countries was raised after Azerbaijan imposed taxes on Iranian truck drivers passing through Azerbaijan’s newly conquered territory in Nagorno-Karabakh to bring goods to Armenia, and arrested two truck drivers, stoking outrage in Tehran.

Hossein Amir-Abdollahian, the Foreign Minister in the administration of newly elected President Ebrahim Raisi, warned Azerbaijan’s new ambassador to Tehran that the Islamic Republic would not “tolerate the presence and activities of the Zionist regime” along its borders. Amir-Abdollahian indicated that Iran would do “whatever necessary” to repel Israeli encroachment, ominously warning that the IRGC’s Quds Force were “soldiers without borders.”

Iranian leaders also expressed concern over terror groups such as ISIS, which it suggested had infiltrated its members into Azerbaijan as volunteers during its 2020 war. Azerbaijan was known to recruit Syrian mercenaries to its side during the conflict, possibly violating international law in the process.

Azerbaijani president Ilham Aliyev told the Turkish state-run Anadolu Agency news outlet that Iran had not informed him of the planned exercises and questioned Tehran’s motivations for doing so, although he acknowledged that it was their “sovereign right” to conduct the exercises on their own territory.

While Iran and Azerbaijan are both majority-Shi’a Muslim states—two of the world’s only four such states, in addition to Bahrain and Iraq—they have a complicated history and some degree of mutual animosity. Ethnic Azeris are a majority in several of Iran’s northwestern provinces and have pushed for separation from Tehran on several occasions in the past century.