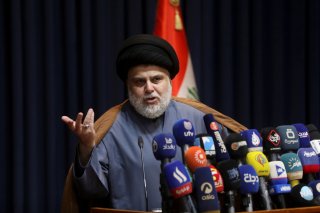 Seven months after Iraq’s October 2021 elections, tensions have risen across the country as the parliament’s competing factions have failed to assemble a governing coalition. Particularly sharp divisions are evident between the Iraqi nationalist faction of cleric Muqtada al-Sadr and the pro-Iran Coordination Framework Alliance (CFA), the political arm of the Iranian-sponsored Popular Mobilization Forces militia groups.

Although Sadr’s faction, the Sadrist Movement, won 73 out of 329 seats, making it the largest party in parliament, it has been unable to expand its coalition to include two-thirds of the parliament, the number required to elect a president and therefore to form a government. Sadr’s bloc, the Saving the Homeland alliance, now includes the Sadrist Movement, the Sunni Sovereignty Alliance, and the Kurdish Kurdistan Democratic Party; its cross-sectarian nature has given it significant support in each of Iraq’s regions and a majority of 180 seats in parliament, but it remains well short of the 220 needed for a presidential election. Most legislators not in the Sadrist camp or the pro-Iran camp have boycotted legislative sessions, waiting for concessions from either Sadr or the CFA in exchange for their support.

Under Iraq’s post-2003 governing system, the country’s ceremonial presidency is typically given to a Kurd, while the prime minister is normally a Shia and the speaker of parliament a Sunni. Sadr’s alliance has placed its support behind Rebar Ahmed, the current interior minister of Iraq’s autonomous Kurdistan region, for the presidency, while the Patriotic Union of Kurdistan (PUK), the main competing Kurdish party, has supported the re-election of current president Barham Salih. Outside commentators have suggested that Sadr’s alliance might partner with the PUK, which has not aligned with the pro-Iran bloc, if the question of the presidential nomination could be resolved.

Although the parliament should have been dissolved after the initial failure to elect a president, some legislators have opposed the dissolution out of concern that they could lose their seats in a rematch, and have raised concerns that a second election with similar results would simply lead to a recurring failure to form a government.

Iraq’s political conditions have remained turbulent since October 2019, when a nationwide cross-sectarian protest movement erupted over frustrations with corruption and a lack of public services. That protest movement led to the resignation of Prime Minister Adil Abdul-Mahdi the following year; his successor, current prime minister Mustafa al-Kadhimi, has pushed for stability and cautiously supported political and economic reforms, although many Iraqis remain frustrated with the slow pace of change.