Their Lives Were Saved By a Hashtag: How Online Activists Stopped Three Executions in Iran 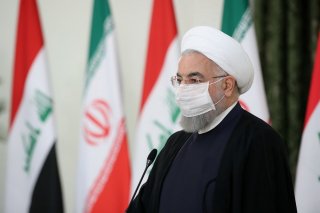 Amirhossein Moradi, Saeed Tamjidi, and Mohammad Rajabi were supposed to die by execution. They may not, thanks to Twitter and Instagram.

The three young men were arrested in the wake of the November 2019 unrest, when demonstrators rose up and security forces cracked down across the country. Their sentence—allegedly for being “riot leaders”—was supposed to be an example to would-be protesters.

Instead, it galvanized the nation.

A social media campaign organized around the hashtag #اعدام_نکنید (Don’t Execute) showed just how deeply the Iranian public was outraged by the death sentences. After several days of public pressure, the Supreme Court of Iran agreed to review the case.

“The suspension of the execution sentences for the three youths shows the power of organic change led by the grassroots in Iran,” said Sina Toossi, a senior research analyst at the National Iranian American Council. “This movement was unique, in that it was almost exclusively online. But its sheer size and scope reflected an outpouring of popular will that could not be easily ignored by authorities.”

The story of the Don’t Execute movement begins on November 15, 2019, when the Iranian government suddenly announced that it would double the price of gas.

The gas price hike was the straw that broke the camel’s back after more than a year of runaway inflation and economic pain, partially caused by a U.S. “super maximum economic pressure” campaign.

Demonstrators began to block highways in response to the announcement, and the protests spread to fifty cities around Iran.

Events soon took a darker turn. Protesters chanted slogans not only against the economic situation but also against the ruling Islamic Republic itself. Demonstrators torched gas stations, banks, monuments to Iranian leaders, and even religious schools. Security forces began to fire live ammunition.

The government shut down the Internet the next day. When access was restored a week later, it became clear that security forces had ended the protests with a brutal and bloody crackdown.

Moradi was arrested on November 19. Rajabi and Tamjidi, who both knew Moradi, fled to Turkey soon after. They were deported by Turkish authorities back to Iran and arrested on December 18.

It’s not clear why the three men were targeted.

Babak Paknia, a human-rights lawyer who has taken the case on, said in one of his video messages about the case that the only evidence against the trio was protest footage that they had filmed. The three men “did not attack anyone with guns or burn banks,” Pakinia said.

“They didn’t have a fair trial so we are not sure what they did,” says Negar Mortazavi, an Iranian journalist in Washington, but, “people think that the justice system, run by hardliners, is trying to make an example out of these three for the rest to discourage people from participating in future protests.”

Tara Sepehri Far, a researcher at Human Rights Watch, added that painting people as rioters and agitators is the government’s strategy to “lower the standards for authorities” over their own handling of the November 2019 unrest.

Moradi eventually did confess to the crimes he was accused of on state television. But the confession came after months of alleged torture. Moradi says that he was beaten, given “electric shock treatment,” and refused medical treatment.

Rajabi and Tamjidi also say that they were hung upside down and beaten.

The three were tried in February 2020 and convicted of moharebeh, a charge that means “piracy” but is often used to prosecute political opponents. The penalty is death.

But there were several problems with the verdicts, even under Iranian law. The three men had been denied access to a lawyer, which they should have been guaranteed even during the investigation stage of their case, Paknia claims.

Paknia and other human rights lawyers took the case to the Supreme Court. But by July 2020, they came back with bad news—the verdict had been upheld.

The lawyers still had a longshot chance of stopping the executions. A law called Article 477 allows the Iranian judiciary to overturn verdicts that are “in contravention of Shari’a,” or Islamic law, which allowed the lawyers to make an appeal for religious mercy.

Iranian netizens wanted to give the lawyers some backup, so they began to flood the Internet with the hashtag #اعدام_نکنید (Don’t Execute) on July 14. It became the most popular hashtag on Persian-language Twitter that day.

“For a six day period, these are pretty massive numbers for a hashtag like this on [T]elegram and Instagram,” wrote Mahsa Alimardani, an Internet freedom researcher at the human rights organization ARTICLE19, in a message to the National Interest. “[E]ntertainment/commercial content is typically king on these platforms.”

This outpouring of support also seemed to be completely organic—while Persian-language Twitter is often flooded with bots, Instagram and Telegram are much harder to manipulate, Alimardani emphasized.

President Donald Trump and his State Department did attempt to promote the hashtag but were lambasted by Iranian dissidents.

“Your cruel and dishonorable sanctions have endangered the lives of thousands of Iranian citizens,” wrote Iranian journalist Mehdi Mahmoudian, who had previously been imprisoned for his negative coverage of the Iranian government. “Mr. President, please #shut_your_mouth.”

For the most part, the United States was simply out of the picture. Most of the initial tweets under the hashtage Don’t Execute came from inside Iran, according to geolocation data released by Twitter.

“The anti-execution campaign in Iran is actually not new,” Mortazavi emphasized. “It has been a subject of massive national debate in recent years, with many executions being halted after public outcry and with help from families.”

Many activists look “up to countries who have completely abolished the death penalty,” even for murder, she said. Iran currently has the second-highest number of executions per year, after China.

But the case of Moradi, Rajabi and Tamjidi was “especially disturbing for the public because these three young men are not accused [of] murder,” according to Mortazavi.

Just as sentencing the three men to death was the government’s attempt to find a scapegoat for the November violence, the outcry against their sentence was a “way for Iraniain civil society to show discontent with how the November 2019 protests were handled,” Sepehri Far said.

Then, on Monday, the lawyers came back with better news: the Supreme Court agreed to examine their application for a retrial under Article 477. It was only the first step in a long process, but it gave Moradi, Rajabi and Tamjidi a shot at saving their own lives.

“The judicial system is based on evidence, rights, and justice,” he said. “Manipulating cyberspace is not effective.”

But it was clear that the campaign had some effect in demonstrating “what public opinion in Iran is with regards to lack of fair trials,” which must have been a “significant factor” in the government’s calculus, Sepehri Far said.

Significantly, the campaign was almost entirely online. Street protests broke out in Behbahan—which the government attempted to stop with a local Internet shutdown—but did not spread to other cities.

Maysam Behravesh, an analyst at Gulf State Analytics, wrote in an email to the National Interest that what happened in November “signifies unprecedented state willingness to deploy coercive force against mass unrest and public protests, so quite understandably people tend to voice their grievances on social media rather than in the streets.”

Even without a physical presence, the hashtag was a real demonstration of Iranian public opinion.

“A rare characteristic of the initiative was its ability to cross political and partisan lines and bring Iranians of various and opposing persuasions together in opposition against not only the execution verdict in question but also against capital punishment itself as a punitive or preventive measure,” Behravesh emphasized.

And the seeds of the next online campaign may have just been planted.

Mohammadi’s daughter Kiana and son Ali made a video appeal for their mother’s freedom, posted to Twitter by Iranian dissident journalist Taghi Rahmani on Monday.