There is No Military Victory in Afghanistan 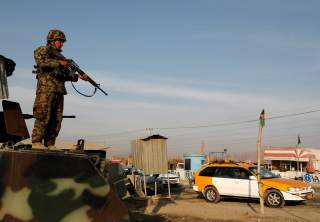 Donald Trump wants to get U.S. troops out of Afghanistan. In July he decided to begin negotiations with the Taliban and he is now considering plans to withdraw seven thousand troops, half of the U.S. force in the country. The president is right to seek an end to this lost war, but we should be under no illusions about the potential outcomes of an American withdrawal.

We are not making progress in pacifying Afghanistan. Taliban forces control or contest a greater portion of the country than at any time since 2002—nearly 60 percent, by some reckonings. Their urban terrorism makes a mockery of Kabul’s supposed “ring of steel.” Even Afghanistan’s most ruthless warlords are not safe. First Vice President Rashid Dostum, an Uzbek infamous for his cruelty, lost nine members of his security detail to a suicide bomb last summer. Abdul Raziq, a Pashtun border patrol commander renowned for being brave, merciless and effective, was killed in an October attack, with the U.S. commander in Afghanistan, General Austin Scott Miller, just feet away. The Trump administration’s vaunted new strategy has only seen tangible growth in one metric: the number of bombs dropped on Afghanistan.

Even the war’s proponents admit that we are stalemated, at best. General Joe Dunford, Chairman of the Joint Chiefs of Staff, has said that the Taliban “is not losing right now” and that there is “no military solution” in Afghanistan. Retired General Stanley McChrystal conceded to an audience that he has no answer for Afghanistan but that we should just continue to “muddle along.” Such empty advice probably doesn’t make it into the general’s bestsellers.

Muddling along may not even be sustainable. Escalating the war will achieve nothing. One hundred thousand American troops were only able to temporarily pacify the most violent parts of Afghanistan, in the south and east. Some areas, like Kunar Province, were never really under NATO control. When those soldiers went home the Taliban came back with a vengeance, recapturing most of Helmand Province as the Afghanistan National Army units there disintegrated.

Should we pull out all U.S. troops and end the Resolute Support Mission, what then? It should go without saying that our NATO allies will follow us out the door—most had little enthusiasm for being there in the first place. The Government of the Islamic Republic of Afghanistan (GIRoA) will then be forced to fight alone. That will not end well.

It is not easy to judge a nation’s will to fight. Nonetheless, it should be clear that the Afghan national security forces (ANSF) and the kleptocratic Islamic republic they protect will not survive without generous Western aid and advising.

The Afghan military and security services, 314,000 strong on paper, are unable to defeat a Taliban force less than a fifth their size. The ANSF are also fiscally unsustainable. Afghanistan would have to spend almost its entire national budget of $5.4 billion to fully pay for its military. As it currently stands, the Afghans struggle to meet even their nominal commitment of $500 million. That is to say nothing of the fact that more than half of the national budget comes from foreign donor assistance.

ANSF casualties are as troubling as the budgetary realities. Afghan casualties are classified, supposedly at the Afghan government’s insistence, but former Secretary of Defense James Mattis let slip that the “Afghan lads” had lost one thousand men just in August and September. The Afghan National Army (ANA) loses nearly 3 percent of its force every month to attrition—wounds, desertion, failure to re-enlist. Replacing over a third of the army every year is not sustainable.

As a result of the Taliban’s attacks, many of which are targeted at recruiting stations, ANSF recruiting has dried up. The New York Times reported in September that recruiting is down across the country. The head of the ANA’s recruitment center in Helmand said that “Sometimes we don’t see any recruits for weeks.”

These trends are exacerbated by the philosophy of U.S. military advisors. As in Vietnam, we are largely creating a mirror image of our own force in an alien land. Fifty years ago it was a reliance on firepower and air mobility. Today, in addition to those traits, we have taught the Afghans to poach their best soldiers for a special operations force that does the bulk of the offensive fighting as a national fire brigade. Small wonder that conventional Afghan units, lacking the critical ballast of the army’s most capable and courageous officers and NCOs, often collapse in combat. And the elite forces are suffering tactical defeats of their own. U.S. airpower, even when controlled by American troops kept out of harm’s way, is preventing far greater disasters for Afghan government forces.

We are still squandering a little blood and much treasure in Afghanistan and yet we are losing a war we have spent seventeen years fighting. Marine Lt. Gen. Kenneth McKenzie, Jr., nominated to lead United States Central Command and the Afghan war under it, told the Senate a month ago that Afghan forces would likely collapse if U.S. forces left. But he was unable to say when the ANSF would be able to fight and win alone.

There are other ways to avert a potential terrorist haven in Central Asia. Enlisting Afghanistan’s neighbors, all of whom have more to lose from a failed state there than we do, is an obvious answer. That will require tradeoffs, however, with the Russian and Chinese competitors with whom we have far more important issues to resolve. Absent either nation, or the Pakistanis, serving as a stabilizing influence, we can always return to Afghanistan in force to punish or unseat a hostile regime. Contrary to the increasingly hysterical foreign policy establishment in Washington, there is nothing wrong with using discrete punitive military expeditions as a tool of national security. A Terminator Afghanistan policy of “I’ll be back” is both smarter and cheaper than persisting in the Sisyphean idiocy of trying to build a functioning state in a land that has never truly had one.

If Zalmay Khalilzad, the U.S. Special Representative for Afghanistan Reconciliation, can procure a face-saving agreement with the Taliban, we should take it and leave. But we should be under no illusions about what will happen after U.S. and NATO forces depart Afghanistan. The regime of the communist Mohammad Najibullah, still remembered fondly by some Afghans, fell less than three years after the Soviets withdrew. We will be lucky if our Afghan clients survive any longer than that.

Gil Barndollar is the Director of Middle East Studies at the Center for the National Interest and Military Fellow-in-Residence at the Catholic University of America’s Center for the Study of Statesmanship. He served as a U.S. Marine infantry officer from 2009 to 2016.