There Will Be an Afghanistan After the Taliban 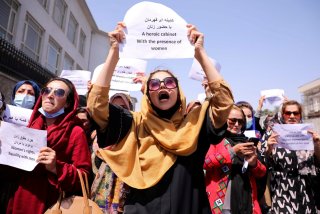 In September 1996, the Taliban captured Kabul for the first time. I was eighteen years old and, like many people, hoping that the war that began with the Soviet invasion of Afghanistan in 1979 was finally over. I was curious to know what these newcomers would bring. It didn’t take long for me to find out. Within a few days, our new rulers were beating men who had shaved their beards, banning women’s education, closing all non-governmental media outlets, and destroying our cultural and historical heritage. My sister had a nervous breakdown when she learned she could no longer go to school. The streets of Kabul were filled with jihadi fighters from South Asia and the Middle East, the allies of the Taliban who helped them capture Kabul. They preached global war against the non-believers and declared their absolute rejection of the modern world.

It soon became clear that the Taliban’s conceptualization of Islam and Afghan identity were very different from those with which I’d grown up. As someone born and raised in a Muslim family, I found the Taliban’s brand of religion an alien concept to my own. Two decades later, I explored this disconnect as a doctoral student in anthropology, arguing that, for many of Afghanistan’s citizens, Islam is a faith deeply rooted in culture, history, and tradition, while, for the Taliban, it was an ideology that drove a fanatical political project. So when the CIA assassinated the leader of Al Qaeda, Ayman Al Zawahiri in late July in downtown Kabul, my fellow Afghans and I were not surprised. We knew that the Taliban would welcome Al Qaeda back to Afghanistan after the fall of Kabul. We knew that these radicals had not changed and any approach by the international community that sought out “normalcy” with them would not work.

For those of us who lived under the Taliban’s reign in the mid-1990s and were subjected to its terrorism after 2001, it has been clear that the Taliban, while not a monolithic movement, remains steadfast in its jihadist ideological orientation. The new regime has shown little interest in changing its politics, consistently reintroducing the policies it enforced when it was last in power. It remains committed to a draconian code of law based on a medieval conception of “vice” and “virtue.” And the ways in which it enacts state-society relations reflect its experience as a militant group, not a responsive political movement. There is nothing unique about the Taliban in this regard; its leadership and rank and file are simply imposing the aim and beliefs of their core ideology, correctly interpreting its heritage and teachings. The Taliban’s understanding of the world is defined by violence and finds common cause with its jihadi kin around the world. The moral arc of the Taliban’s universe bends towards caging women and inflicting silence on the masses.

The Taliban’s forcible capture of Kabul resulted in the new regime’s isolation on the world stage. But isolation did not provoke a shift in policy on its part. On the contrary, we were tricked again. A tactical inclination to employ diplomacy to secure the U.S. withdrawal did not signal a strategic shift on the Taliban’s part towards global integration. A genuine move towards moderation would, instead, threaten its credibility with the jihadi “international community.” So long as that community provides material and symbolic support, the Emirate will remain disinclined to cater to international diplomatic pressure.

For many years, Western analysts and policymakers introduced binaries such as hardline versus moderate, even good versus bad, hoping that the nature of the Taliban could be parsed in the service of more productive engagement. Those illusive binaries obscured an ideology that we, Afghans, understood through visceral experience as one at odds with civility, enlightenment, the protection of human rights, and peace. Debates and discussions persisted amongst international “experts,” keeping decisionmakers from acting with resolve. Instead, they remained stuck in a holding pattern of inaction, while the voices of those who suffered at the hands of this group were seldom heard. The deal that brokered the withdrawal of American forces, underpinned by a logic that the Taliban could change, left us at the mercy, once again, of its terror and totalitarianism.

In the wake of the Afghan republic’s collapse, what is left for Afghanistan and Afghans? I find myself displaced, yet writing a book that persists in its thesis about the promise and possibilities of the Afghan nation-state. In light of recent events, some might consider that the thesis is a dream, and, in some ways, it is one. But it is not a fantasy. It is a dream anchored in my country’s century-long history with constitutionalism and struggle for women’s rights, as well as its most recent experiment with democracy. It is a dream that conjures a society where human beings are treated with dignity, where women are not for sale, where schools are open, where leaders are elected, where corruption is condemned, and where terrorism is never normalized.

After 2001, many of us risked our lives to vote, write, make art, and demand more from our flailing government. And, since 2021 we see that democratic spirit remains with women protesting in the streets, public intellectuals speaking their minds, and journalists and activists organizing across the country. Social media has offered new spaces for expression that threaten the Taliban’s narrative in meaningful ways. Meanwhile, an armed struggle is also taking shape in different parts of the country, one that has the potential to seriously undermine the regime.

As Afghans, we know that holding onto our dream comes with uncertainty and displacement. It exposes our hearts, minds, and bodies—and those of our families and friends—to otherness, prison, torture, rape, whips, and bombs. But our dignity as a people resides in a collective belief in living freely and being connected with the rest of the world in the service of building a more humane society. And, so, even in the midst of dislocation and despair, we know that the violent extremism of the Taliban is foreign to us and will eventually fail.

Omar Sharifi is country director of the American Institute of Afghanistan Studies and a Research Fellow and Lecturer at the Hubert H. Humphrey School of Public Affairs, University of Minnesota.