There Will Be No Second Iran Deal 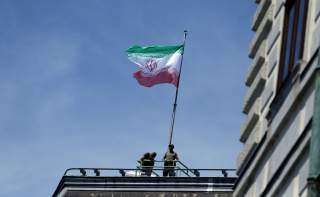 Having withdrawn from the Joint Comprehensive Plan of Action (JCPOA), literally rattled a few sabers, and approved record-breaking weapons sales to the Gulf monarchies, President Donald Trump is now pronouncing himself happy to meet with Iran’s leaders without preconditions. While such a meeting would be as unprecedented as June's summit with Kim Jong-un in Singapore, it would also be equally empty. The Iranians are not interested in negotiations with the United States and we should not kid ourselves that this administration is on the verge of any sort of breakthrough in the Persian Gulf.

There seems to be a strong belief in the Trump administration that Iran can be broken by sanctions and forced to the negotiating table. When paired with bizarre affection for the cultish Mujahideen-e Khalq and abetted by the many amply paid mouthpieces of the Gulf Cooperation Council in Washington, this belief is extremely resistant to reality.

America can isolate, impoverish, and even radicalize a nation through economic sanctions but there is little evidence that sanctions can change a targeted country for the better. As Peter Beinart has noted, studies show that sanctions shift the balance of power in a regime’s favor, making countries less democratic and more repressive. Sanctions enable a regime to consolidate its power over the economy, especially the black market. Iraq is instructive: the “oil for food” program helped to devastate Iraq’s physical and human infrastructure, setting conditions for a failed state once the Saddam regime was brought down. Jason Rezaian, though once imprisoned by the Iranian regime, wrote in May that “when people are squeezed economically, their needs and aspirations become much more about survival than about working toward change.”

Americans can look just ninety miles off our coast to see the result of sanctions. Cuba is poor, crumbling and defiant. When it had a major patron, it was an open enemy of the United States, with tens of thousands of troops fighting in Africa against American proxies. Now, nearly thirty years after the fall of the Soviet Union, the Castro family remains in power.

The Persians are every bit as proud as the Cubans. Iranians still revere Mohammad Mossadeq, the nationalist overthrown by an Anglo-American coup in 1953, for his pride and intransigence. Even after eight years of war and half a million dead, Ayatollah Ruhollah Khomeini said he “drank a cup of poison” when he agreed to a ceasefire with Iraq. While Iran has a young population and the “rich kids of Tehran,” the country is run by men who experienced war, deprivation, and isolation. For example, Qassem Suleimani, the head of the Iranian Revolutionary Guards Quds Force and one of the most powerful operators in the region, epitomizes the zealous nationalists who fought for the Revolution as young men and now run Iran. He is unlikely to be deterred by economic hardship.

Iranian President Hassan Rouhani and his foreign minister and chief negotiator, Mohammad Javad Zarif, barely got the JCPOA through amidst domestic opposition and suspicion of America. For their exertions, they were rewarded with a travel ban that treats their citizens like terrorists and a unilateral American withdrawal from the nuclear deal in May. Ali Motahari, the deputy speaker of Iran’s parliament, said that “Today, negotiations with the U.S. bring humiliation.” If Rouhani accepts renewed negotiations, he would be rightly denounced at home as a quisling, like the Qajar shahs who sold their country to the British and the Russians a century ago. Even were Rouhani has little domestic room to maneuver.

Pulling out of the JCPOA, while still insisting that there is a better deal to be made, is a fantasy. American preconditions for negotiations, as recently reiterated by Secretary of State Mike Pompeo in spite of Trump’s statement, are maximalist. Pompeo’s demands best resemble Austria’s ultimatum to Serbia in 1914. While probably not designed as a pretext for war, the twelve conditions laid out in May amount to both domestic and foreign policy emasculation for the Iranians. These are not really preconditions but rather a demand for pre-emptive surrender by the Islamic Republic.

Any adversary thinking about negotiating with the United States will remember “the Libya model” even without a helpful reminder from John Bolton. A regime can come in from the cold and be normalized and even feted in the United States and Europe. But should internal strife and humanitarian concerns rear their heads, American praise can turn into bombs virtually overnight. The contrasting fates of Hosni Mubarak and Bashar Al Assad are also foremost in the mind of every leader in the Middle East.

In the face of all these challenges, Americans have an administration that appears to treat geopolitics as a reality show. Sprinting from one plotline to the next with a crumbling pretense of narrative coherence will not produce anything of consequence. Drama can be manufactured and then ramped down, but nothing tangible is likely to be accomplished. The short summits of the past year have produced pictures, platitudes, and promises, but despite the headlines, they have not yet led to any significant changes with either America’s enemies or her allies.

A policy of sustained isolation and pressure on Iran, conducted with Chinese and Russian acquiescence, could yield real results. Juggling a trade war with China, domestic hysteria about Russia, tough talk with Europe, and threats to Iran will result in a pile of dropped balls. It is impossible to discern any overall American strategy in the Middle East over the past year. Even the inchoate “America First” impulse is more rhetoric than reality.

In principle, diplomacy is usually better than the alternatives. As Winston Churchill famously said, “To jaw-jaw is always better than to war-war.” As in Korea, we are far better off with empty summits than with empty threats. However, the president is highly unlikely to get even a photo opportunity with the Iranians any time soon.

Image: FILE PHOTO: The national flag of Iran is seen on top of the Austrian Chancellery during the visit of President Hassan Rouhani in Vienna, Austria July 4, 2018. REUTERS/Lisi Niesner/File Photo​