These Are the Special Iranian Units That Crackdown on Domestic Unrest 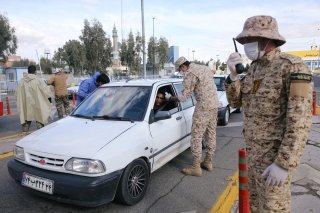 "The Collapse of Empire" is the cover headline for this week’s edition of the Sobeh-e Sadeq, published yesterday by the IRGC Political Bureau. The main publication of the Islamic Revolutionary Guard Corps, this week's magazine focuses on the unrest in the United States, criticizes the U.S. government’s violation of human rights, and predicts the country is in a state of collapse.

Since the protests against the Minneapolis police department started in the United States in light of George Floyd's tragic death, the Islamic Republic's propaganda machines have broadly covered these recent protests in the United States, highlighting police brutality and violent suppression of protests in America. The Islamic Republic's Supreme Leader Ayatollah Ali Khamenei was vocal in his criticism of the U.S. government saying, "They kill people in an obvious crime and do not offer an apology while claiming [to support] human rights."

His statement triggered massive backlash in social media, especially Twitter, in which Iranians tweeted pictures of fellow Iranians killed in the past forty years by the regime, in response to Khamenei’s statement.

Khamenei and the IRGC are abuzz about the harsh suppression of protest in the United States meanwhile in just the last round of protests in Iran, in November 2019, up to 1,500 people were killed in a matter of days by Iran's security forces, the police, the Basij, and the IRGC’s new establishment, the Provincial Guards (IRGC-PG).

Established in 2008, the IRGC Provincial Guards have been implemented in each of Iran's thirty-one provinces, in addition to a separate command for the country's capital, Tehran.

The Provincial Guards now constitute a military administrative system that directly parallels the state's administrative system but is accountable only to the Supreme Leader and the IRGC's leadership. This system is beyond the control of the Interior Ministry and, ultimately, the president.

At a lower level, the IRGC-PG have at least one regional command for each county, a district command for each bakhsh (township), and a local office (Basij base) for each neighborhood. Through this system, the IRGC recruits, organizes and indoctrinates pro-regime people through the civil Basij militia as part of a strategy to secure local loyalty.

Through this cluster network, the IRGC-PG has infiltrated every level of society, creating a network of tributary organizations that feed into the IRGC.

The omnipresence of the IRGC-PG is evident at even the most local levels of the Iranian government. The IRGC-PG has a representative in all the social, political, cultural, and economic councils of each province.

Most critically, the IRGC-PG are responsible for domestic security. Essentially working as the military governor of the province, a provincial commander of the IRGC-PG is a key player with decisionmaking power within each province's security council. The IRGC-PG runs several internal security and military units, including Imam Hussein infantry battalions and anti-riot Imam Ali battalions. Through the organization of hundreds of their ideological personnel in security units, the IRGC-PG have shaped several motorcycle units for rapid deployment and intimidation purposes.

These forces have been utilized since 2009 to suppress any protest and unrest if Iran's police, the first line for defending the regime, is unable to control them. In the 2017–2018 protests and 2019 mass unrest, the IRGC Provincial Guards have brutally and successfully suppressed peaceful protest by using lethal measures.

Paranoid to its very core, the IRGC-PG rely on broad informant networks who oversee society by gathering intelligence to wield against dissidents and activists. They both create a surveillance society and use the collected information to intimidate their political rivals.

The IRGC-PG bend local government to their will, ensuring only loyal candidates get elected to supposedly "democratic" offices. For example, to make sure loyalists or conformists will fill all elected seats, The IRGC-PG are playing direct roles in elections. They directly or indirectly support revolutionary and radical candidates for parliament and city council elections, financially support their campaign, use their massive cluster network for promoting them, and mobilize their Basij militia personals to vote for their desired candidates in the polls.

The IRGC-PG are further tasked with enacting the regime's revolutionary aims at the local level by incubating conservative religious values, shaping educational curricula, and even running sports clubs and recreational centers. The IRGC-PG runs a series of educational centers, from daycare to colleges, control local newspapers, radio, and television news stations, and even produce movies, songs, and documentaries for local audiences. In cyberspace, the IRGC-PG have shaped their cultural and cyber operational units to troll and identify local dissidents and manufacture pro-regime content and accounts.

Through these societies and security organizations, the IRGC-PG have become a central part of the strategy to suppress mass demonstrations and protests against the Islamic Republic, which have only become more frequent in the last few years. As Condoleezza Rice said, Iran and other authoritarian regimes should examine their records on human rights before criticizing the U.S. response to recent protests.

Saeid Golkar is an Assistant Professor in the Department of Political Science and Public Service at the University of Tennessee at Chattanooga, and concurrently, a non-resident Senior Fellow on Middle East Policy at the Chicago Council on Global Affairs (CCGA).