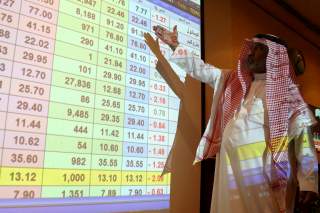 A brazen attack on key Saudi Arabian oil facilities on September 14 marks an escalation in the drone wars that have tormented the kingdom over the past few months. The attack struck Abqaiq’s large Aramco oil-processing facility and another site at the Khurais oil field. This is the third round of long-range drone or cruise-missile attacks that have struck Saudi Arabia since May. They come in the context of rising tensions between the United States and Iran, as well as Israel and Hezbollah. Saturday’s attack is a game-changer in significance and its proximity to U.S. bases in the Persian Gulf point to a growing threat.

There was video footage of explosions, fire and smoke rising from Abqaiq in the early hours of September 14. Hours later the fires were under control and Houthi rebels in Yemen claimed that ten drones carried out the attack. Iranian media have highlighted the attack amid assertions that it cut half of Saudi oil capacity. Some of that output will be restored this week but restoring the damage and full capacity will take time. Secretary of State Mike Pompeo blamed Iran for the attack and claimed that Tehran was behind another one hundred attacks on Saudi Arabia. He didn’t specify that the attacks were mostly carried out by Iranian-allied Houthis in Yemen, but the implication is that they were. Pompeo said there was no evidence the September 14 attack came from Yemen—a key assertion that makes the Abqaiq attack a turning point. It means the assault may have come from closer to the oil fields, either from Iraq, directly from Iran or other sources. The investigation into the attack has cast a shadow over the Persian Gulf and ratcheting up U.S.-Iran tensions and representing a strategic escalation.

This is the third attack since the May 14 strike near Al-Duadmi, which was also initially thought to be a drone flown from Houthi-held areas in Yemen, and it is by far the most serious. Pompeo had flown to Iraq earlier that month to warn about potential Iranian attacks. And reports in June indicated that the May 14 attack could have come from Iraq, launched by Iranian-allied paramilitaries.

A few months later, there was a second strike at Shaybah oil field, near the border shared by the United Arab Emirates (UAE) in eastern Saudi Arabia. It was widely covered in Iranian media but also ascribed to the Houthi rebels. These attacks are portrayed as part of an expansive air war that Houthi rebels have carried out in southern Saudi Arabia, including targeting facilities at Abha and Jizan. A timeline of the short-range attacks shows their increasing frequency. The Houthi drones are linked to Iranian technology and are a part of Tehran’s growing arsenal of weaponry. They are a part of Iran’s overall success in precision ballistic missiles and cruise missiles, technology, which it routinely shows off at military exhibitions and in attacks against dissidents in Iraq, against ISIS in Syria and against Israel.

Saudi Arabia has called meetings in the past to condemn the drone attacks. It has received support from the United States and key Gulf allies, such as the UAE, since June. But the attack on September 14 is altogether different from previous attacks. It is unlikely that it was carried out by an Iranian Qasef-1-style drone, which has been frequently used in recent attacks, is relatively low-tech, and has a range of 150 kilometers.

The distance from Yemen to Abqaiq is about 1,200-1,600 kilometers, depending on where the drone was launched from, which is beyond the known capabilities of Houthi drones or cruise missiles. The Center for Strategic and International Studies (CSIS) released an educational video in August which highlighted how the Abqaiq processing facility was a critical infrastructure site for Saudi Arabia. CSIS has suggested that Iran could damage these facilities directly by striking from Iran across the Persian Gulf.

The central concern, besides the threat the weaponry poses to Saudi Arabia’s strategic infrastructure, is that these drones penetrated a sensitive area, one that is about hundred kilometers from U.S. naval facilities in Bahrain. That means the flight path of the drones or warheads that struck the oil facility could have been within range of air-defense radar based in the Gulf. The United States has a variety of bases in the Middle East, including Al Udeid Air Base in Qatar, Al Dhafra Air Base in the UAE, the Fifth Fleet infrastructure in Bahrain, and various sites in Kuwait. The United States deployed F-22 jets to Al Udeid Air Base in June. A 2017 report noted that the U.S. Combined Air Operations Center at the Al Udeid Air Base has a “dizzying amount of data and intelligence” flowing from sources such as drones and radar throughout the Middle East. The version of the RQ-4 Global Hawk that was shot down in June near Iran’s shoreline was likely based at Al Dhafra Air Base. The USS Boxer, which is part of the Fifth Fleet operations, downed an Iranian drone in July. In a query about the September 14 attack, U.S. CENTCOM responded by referring questions to the Saudi Interior Ministry.

It now appears that drones or another type of weapon, such as cruise missiles, were able to fly into what should have been some of the most well-defended—or at least the most secure—airspace in the world. This is airspace that covers numerous small countries, shipping lanes for oil and oil infrastructure. It is also airspace that should be well-defended by the United States and key allies with air-defense systems like the Patriot surface-to-air missile system.

Patriot missiles have been used to down drones in the past. Their radar systems, the AN/MPQ-53 (PAC-2) has a range that should encompass key areas along the Gulf. Thus, some of the countries in the area are seeking to upgrade their air defense. Bahrain signed an agreement to purchase a Patriot missile defense system in August. Meanwhile, Qatar has also been seeking more support for its Patriot missile system. At the same time, Saudi Arabia has been using its Patriot missiles against Houthi threats and the United States was supposed to send additional Patriot battery to the Kingdom in July.

The widespread condemnation of the September 14 attack reveals that most Gulf countries are concerned about the escalation. The attack shows that drones are able to penetrate deep into the airspace of a key U.S. ally and similar attacks will be an increasing concern in the future. For months Saudi Arabia has alleged that Iran has been behind the attacks, either by prodding the Houthis to carry them out on its behalf or in other ways. The Gulf is already on edge after attacks on oil tankers in May and June.

It is important to recognize the growing threat that comes with the third long-range drone attack carried out in Saudi Arabia. The technology behind the attacks and the risk they pose to strategic facilities, whether in Saudi Arabia or elsewhere, has major ramifications across the Middle East. These attacks overshadow the tension between the United States and Iran as well as existing tensions between other U.S. allies, such as Israel, and its regional rival, Hezbollah, which is linked to Iran.

Seth J. Frantzman is the author of After ISIS: America, Iran and the Struggle for the Middle East. He is the executive director of the Middle East Center for Reporting and Analysis.