Top Generals: We Should Have Stayed in Afghanistan 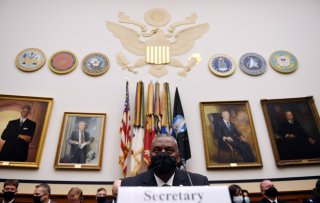 Top military officials claimed in testimony before Congress on Tuesday that they had advocated for remaining in Afghanistan past President Joe Biden’s withdrawal date.

Secretary of Defense Lloyd Austin, Chairman of the Joint Chiefs of Staff Mark Milley, and U.S. Central Command Gen. Frank McKenzie told the Senate Armed Services Committee that the U.S. mission had ultimately been a failure. “It is clear and obvious,” Milley acknowledged, “that the war in Afghanistan did not end on the terms we wanted.”

Austin added that the large-scale desertion and surrender of the Afghan security forces—who on paper enjoyed a four-to-one numerical advantage over the Taliban—had taken the Pentagon, which was responsible for training and equipping Afghan troops, by surprise. He also warned that Afghanistan appeared to be on the cusp of further conflict.

All three noted, however, that they had predicted well in advance of the withdrawal that it could lead to a Taliban takeover. “My analysis was that an accelerated withdrawal, without meeting specific and necessary conditions, risks losing the substantial gains made in Afghanistan, damaging U.S. worldwide credibility and could precipitate a general collapse of the NSF (Afghan National Security Forces) and the Afghan government, resulting in a complete Taliban takeover, or general civil war,” Milley claimed.

In his testimony, McKenzie suggested that he would have preferred to leave behind a residual U.S. force, numbering approximately 2,500 prior to the withdrawal. “If we went below that number,” McKenzie explained, ”we would probably witness a collapse of the Afghan government and the Afghan military.”

The three commanders noted that the withdrawal agreement the United States had signed with the Taliban in Doha, Qatar in February 2020 obliged U.S. forces to leave by May 1, but that the Taliban had already repeatedly violated its conditions and the U.S. was therefore not bound by it.

Austin and Milley faced questions from legislators, particularly Senate Republicans critical of Biden’s decision to withdraw. They also provided details on ISIS-K, the terror group responsible for the August suicide attack on the Kabul airport. In the aftermath of that attack, U.S. forces launched an airstrike targeting ISIS-K that mistakenly killed ten Afghan civilians, including seven children.