Troop Exodus: Why the War In Afghanistan Has Become Another U.S. Foreign Policy Failure 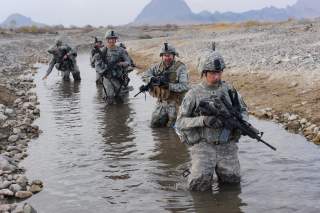 The deal that the Trump administration signed with the Taliban on Feb. 29, 2020, ends U.S. military involvement in the war in Afghanistan over the next fourteen months. But was it a good deal?

My experience with two separate incidents, one as a member of the U.S. Navy in Vietnam and the other as a member of a team tasked with ending the war in Afghanistan, has influenced my opinion.

The first incident occurred in 1965 when I was a junior Naval Flight Officer deployed to Vietnam. Like my colleagues, I was initially thankful to be part of an effort to prevent what we were told was Soviet Communist expansion in Southeast Asia (the Domino Theory) by defeating Communist North Vietnam’s attempt to destroy the democratically elected South Vietnamese government. However, a few months into my deployment, it became clear to me that the government we were fighting for was corrupt and did not have the support of the majority of the South Vietnamese people. Moreover, it was also clear to me that it would be impossible for us to achieve our goal at an acceptable cost.

This message was reinforced one night in early 1966 when I, along with two other officers, got lost while returning to our base following a meeting with Swift Boat officers in the northern part of Cam Ranh Bay.  As we drove around aimlessly, I noticed a building that had a sign that said in French, “You better behave yourself because tonight you might meet your maker.” Given my Catholic upbringing and French language training, I told my boss that the building was most likely a Catholic monastery. We went inside the monastery and met the monks, who were great. They gave us directions to our base and fed us. When we got back in our Jeep, the senior officer, who had heard me talking to one of the monks in French, asked me to tell him what we discussed. I said that the priest had asked me why I thought we would make out any better in Vietnam than the French.

Unfortunately, despite the death of nearly sixty thousand Americans and after killing millions of Vietnamese over the span of several years, we did not fare better than the French. And what really galled me after my tour ended was when I found out, from the Pentagon Papers, that by 1966 our leaders also knew we would endure the same fate. Ironically, the same day that we signed the peace deal with the Taliban, two U.S. Navy ships visited Vietnam.

The second incident occurred in 2010, which is when I was part of a team of people tasked with developing a plan to negotiate the end of the war in Afghanistan. The team was led by Ambassador Lakhdar Brahimi (who chaired the Bonn Conference in 2001 that installed the Karzai government in Afghanistan) and Ambassador Thomas Pickering (former U.S. ambassador to the UN and several other countries) at the behest of The Century Foundation. During our visit to the country, it became clear to me that the United States had missed the opportunity to achieve its objective of destroying the Taliban in 2002, which is when the Bush administration foolishly proclaimed that its mission had been accomplished and diverted its attention and military forces to invade Iraq. It compounded the problem by simultaneously expanding its objective from defeating the Taliban in Afghanistan to nation-building. Therefore, a military solution to the conflict was no longer possible. After our return, we issued a report and briefed several members of the Obama administration’s national security team, urging concrete steps to achieve a negotiated settlement that would involve negotiating with the Taliban.

Unfortunately, despite the support of Brahimi and Pickering, as Barney Rubin who served as the senior advisor to the U.S. Special Representative for Afghanistan and Pakistan in the Obama administration noted, serious negotiations with the Taliban were never undertaken. Therefore, the war lingered on for another decade resulting in hundreds of thousands of deaths and injuries and the expenditure of at least another trillion dollars. Moreover, the Afghanistan government has become less and less popular and more corrupt and the Taliban has taken over more and more of the country. And like the Pentagon Papers, the Afghanistan Papers reveal that senior U.S. officials failed to tell the truth while concealing unmistakable evidence that the war in Afghanistan was also unwinnable.

Is the deal negotiated with the Taliban perfect? Of course not. But since America cannot win the war at an acceptable cost, then it cannot expect a perfect deal. The fact of the matter is that the Taliban will control at least some of Afghanistan after U.S. troops have left the country, something they have already earned on the battlefield.

Will the U.S.-supported Afghan government survive, as the South Vietnamese government did not? That is up to them. But it should be noted that Afghanistan’s corrupt government does not have the support of the majority of the people, which was evident by the low turnout in the last election. And it cannot even agree who won. In fact, a week after we signed the deal, two different men were simultaneously sworn in as president. The government currently controls only one-third of the country and 46 percent of the population.

Could the Taliban support a terrorist group like Al Qaeda again?  Possibly.  But while the attacks of 9/11 were authorized by leaders in Afghanistan, nine of the fifteen hijackers were Saudis, and the attacks were planned in Kuala Lumpur, Malaysia, and Hamburg, not Afghanistan. Moreover, the leader who authorized the attacks deceived the Taliban about his actions. Finally, even before the peace deal, the Taliban were already waging war against ISIS, which is currently the most dangerous terrorist threat to the United States. And, if the Taliban should be foolish enough to try to harbor Al Qaeda after U.S. troops have departed, then the military can destroy the terror group with airstrikes.

Will the Taliban roll back the gains that women have made in the last twenty years?  I do not know.  When I raised this issue with one of the Taliban leaders during our visit he told me not to worry because they would not treat women “any worse than the Saudis.” Saudi Arabia may be one of America’s major allies but its track record with women’s rights is deplorable.

Just as America missed the opportunity to end the war in Vietnam several times before the Paris Peace Accords, which were negotiated with the North Vietnamese, not the South Vietnamese, it should not miss this opportunity in Afghanistan. While some congressional Republicans and some foreign policy experts—some of whom are responsible for diverting America’s attention from Afghanistan to Iraq—have found faults with the deal and want America to keep its military forces in Afghanistan, the vast majority of those who have fought there and the Afghan people do not.

Lawrence J. Korb is a senior fellow at the Center for American Progress. He served as assistant secretary of defense (manpower, reserve affairs, installations, and logistics) from 1981 through 1985.