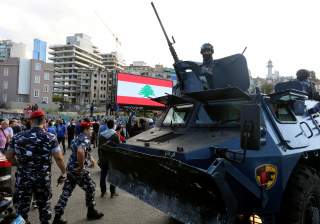 These documents show that the LAF did not cooperate with Hezbollah; rather it demonstrated the LAF’s indispensable and alternative force to stability and Hezbollah. No sooner, the litmus test of the imperative need of the LAF took place in 2007 when a Salafi-jihadi organization Fath al-Islam took over the Palestinian refugee camp of Nahr al-Bared. Lacking equipment and ammunition, the LAF, despite its vigorous spirit, was virtually incapacitated. Thanks to a swift American supply of weapons and ammunition, the LAF prepared to storm the camp despite a warning from Hezbollah’s leader Hassan Nasrallah that the camp is a “red line.” Following bloody pitched battles the LAF reclaimed the initiative against and defeated Fath al-Islam. The battle cost the LAF 166 soldiers and dozens wounded. This was the high price that the LAF had to pay. Still, it was a price that elevated the LAF to a popular level beyond reproach or sectarian politicking. Since then, seeing the benefit of the LAF as a force against Al Qaeda and its sister jihadi organizations, Washington began to systematically equip the LAF with defensive weapons and train some of its officers.

This led to a nuanced and contradictory relationship between the LAF and Hezbollah. The popular enhanced stature of the LAF following its costly defeat of the Salafi-jihadi organization Fath al-Islam, coupled with the Lebanese government’s need for U.S. support, forced Hezbollah to look askance at, yet not disrupt, the U.S. training and arming of the LAF. The LAF and Hezbollah, though in principle integral parts of Lebanon’s societal fabric, perceived each other a rival and a threat to its raison d’etre.

Robert G. Rabil is a professor of Political Science at Florida Atlantic University and Francois Alam is an attorney at Law and Secretary General of the Christian Federation of Lebanon and the Levant. The views expressed in this article do not necessarily reflect those of FAU. The authors can be followed @robertgrabil and @francoisalam.